This thread is to provide early insights and discussion on the War of the Dunes Summon Portal.

For information and discussion on the Season V HEROES, please see:

For information and discussion on the Season V EVENT please see:

In total, for Heroes that’s:

Heroes we’ve seen in Beta that are not currently included:

As you may know from other threads, I held off on publishing the initial Appearance Rates, as we had been explicitly told that they weren’t finalized, and were incorrect.

There is a bonus Ascension Material Chest for the portal.

The Summon Costs for Dunes Summon:

This item can be received as a reward from completing Season V Stages for the first time.

100 Dunes Coins are required for a free Dunes Summon.

Not much to say since it’s just a standard portal.

It does seem like we could subtract 1% from classic rare heroes with each new season. Even if it just puts it into the seasonl rare percentages, it would be a small step that I could point to some progress.

But I’ve also accepted the odds and don’t see them changing it dramatcially.

Is there already any information about how the gem promotions will be? Day 1 will sell a promo with 3000 gems? Or promo with 300 gems and season coins? Or some other promo other than seasons 2, 3, 4? Thanksss!

We will see it just only when it arrives to the game.
I am expecting similar offers what we have for Underwild.

Season5 coins has just arrived to the game: 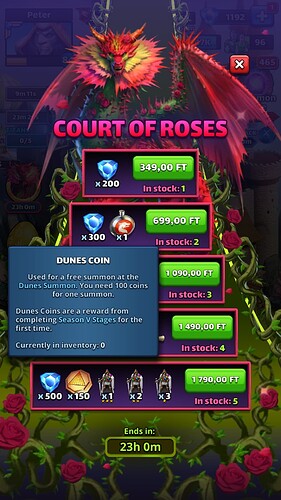 Will there be a house Harkonnen family bonus?

FYI- I just filled an ice chest 30 min ago and it still had Underwild coins. So while dune coins are in-game the transition over is not complete. 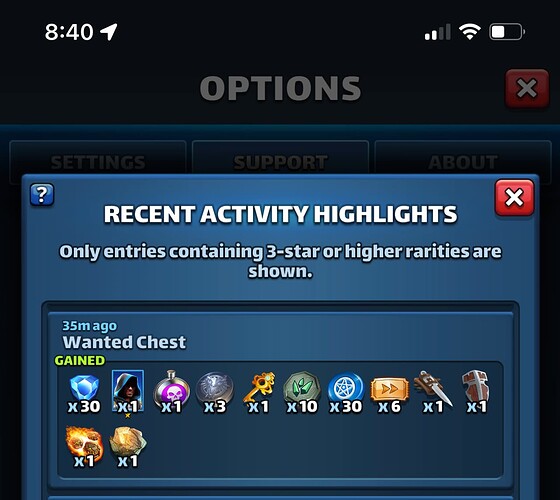 Doesn’t look like all the beta tested 5 stars will be live in this first instance of the portal- just one of each color. From SGG announcement:

So actually I can completely predict what’s going to happen. I have absolutely no interest in that red hero. That will be the one I get

Horus is probably the one I’m most keen to get personally. Would round out my yellow stack very nicely.

He is a future yellow tank in high elo

Also Khonsu could be tank even though he is a sniper, but at very fast speed giving 24% mana ailment for 3 turns and 70% dmg is a great tank option.

S5 is all about overpowered passives which probably arent blocked by taunters, thats why SG is releasing a taunter HOTM

sobek seems to be a beast as flank

I’m waiting for the first hero with no skills, just passives!

Bennu is the beast

The portal is already in the game.
You can discuss it here: