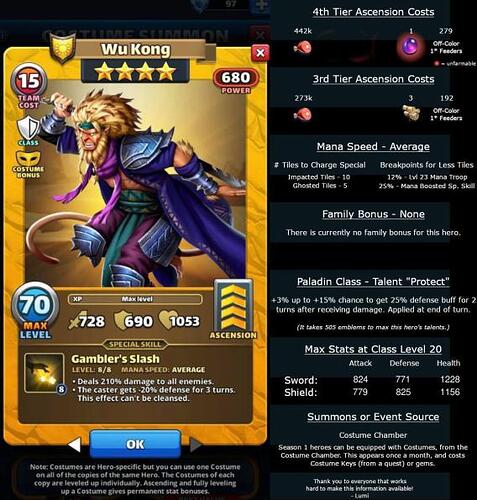 Our much-beloved Classic (Season I) Heroes will finally be forming a Family — and on top of that, they’re getting exclusive access to Superior Talents!

What do you think of Costumed Wu Kong ?

This thread is for thoughts and discussion on Costumed Wu Kong.

Based on preferences Forum members have expressed, please try to stick mainly to Costumed Wu Kong and not wander off topic too much to other heroes.

Is Costumed Wu Kong worth Summoning For?

How many copies of Costumed Wu Kong would be useful to keep & Level?

What do you think Costumed Wu Kong’s Primary Purpose is?

What do you think of Costumed Wu Kong compared to other Heroes?

How does Costumed Wu Kong’s Special Skill and Intended Purpose match his Base Stats?

What do you think which version of Wu Kong is better ?

Is Costumed Wu Kong worth giving Monk Emblems to the original hero?

In Defence, where do you think Costumed Wu Kong is best used?

How do you think Costumed Wu Kong is best used?

What do you think is Costumed Wu Kong worth Limit Breaking ?

If you would emblem Costumed Wu Kong then which Emblem Path would you select ?

He does hit surprisingly hard, but I would only use him in farming and in Towers (often higher floors where his self-debuff last shorter). maybe 4 tourneys, but only to fill out a mono Yellow team.

I suppose for a while the costume tempted me to consider a mono Wu Kong team, say one-two original and three-four costumed, so that the randomizer buff is running for tile damage and for the hit all. and also because the “Sun Wukong and his duplicates” would be thematic to at least one of the Monkey King’s legends’s abilities, heh.

I rarely use Wu costume, I don’t think it’s very useful in defense or attack. He has full emblem and full limit breaker

I gotta disagree here. I love my Wu costume and use it constantly. Mine is +20 and LB’d for attack on the costume side. I will try and remember to post a pic later.

His A value is great. It comes in just under 900 IIRC. The vanilla 4* group is a notoriously poor class. One of the things it really lacks is a hero who can just hit something hard. No special secondary effects resulting in lower impact, you just need something hit hard, period. You get it a little at the 5* level in Joon and Leo, but they hit single targets.

Until you’re successfully summoning paywalled yellow heroes, this costume Wu is your option, luckily he is great at it. He is fantastic for farming and PvE. His A value is so high he makes my titan team too. I don’t PvP a ton, but I wouldn’t hesitate to bring him.

The D reduction sounds like a bigger detriment than it plays out to be.

If you haven’t gotten those paywalled heroes yet costume Wu is worth it. I know his base form has a separate page, but if he is your titan guy still you can get dual use or even bring one of each.

Good luck out there!

I would say worthwhile in the beginning. But as you progress and build your roster, you will use him less and less other than tournaments and farming etc.
Wu is worth the emblems for Titan in the early days so the costume benefits also.
But eventually you may need to reset him.
For that reason I really wouldn’t recommend LB

C Wu Kong has great synergy for me with G Gazelle! Gazelle gives him +100%atk, much higher survivability and makes him immune to his own defense down drawback! Gazelle + C Wu provides major damage to all! Another nice holy 4* to use with them is lady woolerton, a fast team healer, and Gazelle also negates her self mana block! Keep on spamming the heals