This thread is for discussing strategy related to Wu Kong, as well as your thoughts on Wu Kong. 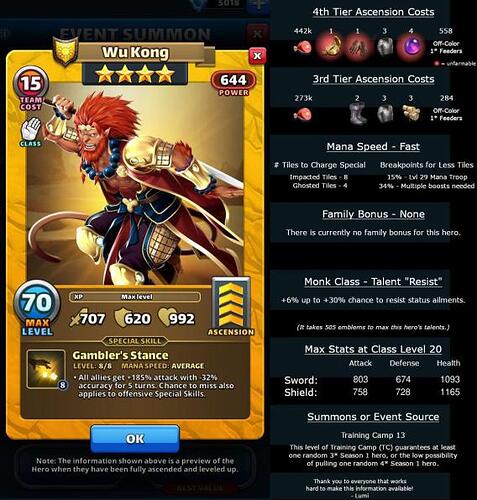 Our much-beloved Classic (Season I) Heroes will finally be forming a Family — and on top of that, they’re getting exclusive access to Superior Talents!

What do you think of Wu Kong ?

This thread is for thoughts and discussion on Wu Kong.

Based on preferences Forum members have expressed, please try to stick mainly to Wu Kong and not wander off topic too much to other heroes.

*NOTE: Summon Results posted without any commentary/feedback at all should be flagged as Off Topic and removed, based on preferences expressed by the Forum community. Please include some comments about what you think of Wu Kong when posting Summon Results. In addition to opinions about Wu Kong, you are also encouraged to include how many Summons it took before receiving Wu Kong (or how many Summons you’ve done without receiving Wu Kong), so other players are presented with realistic experiences of the rarity of Epic Event Hero.

Is Wu Kong worth Summoning For?

How many copies of Wu Kong would be useful to keep & Level?

What do you think Wu Kong’s Primary Purpose is?

What do you think of Wu Kong compared to other Heroes?

How does Wu Kong’s Special Skill and Intended Purpose match his Base Stats?

Is Wu Kong worth giving Monk Emblems to?

In Defence, where do you think Wu Kong is best used?

How do you think Wu Kong is best used?

What do you think is Wu Kong worth Limit Breaking ?

If you would emblem Wu Kong then which Emblem Path would you select ?

Ah Wu, the original Titan specialist. Since been eclipsed by others, but he’s still the most accessible one - anyone who only has him as a Titan specialist should keep him for the moment!

Plus still the “time to throw a Hail Mary pass” (to use an American football term) in wars where the 6th (or whichever) team doesn’t have much of a chance, so you hope to fire Wu Kong’s buff and pray for a tile cascade

In the early days he helped me immensely with events, ones otherwise impossible. So for new players, you should definitely consider him, and you might want more than one copy for mythic titans

The only heroes with less use in my rostwr than Wu Kong is the little gjost chick from season 2 and Mok-Arr.

I tried him when i first started the game as he was an early four star pick up and absolutely despised the misses. He was quickly benched and never used again.

I heard that there are people who love him and use him all the time or hate him and don’t even want to say his name. I don’t know if that’s true, but I’m definitely in the latter group. I tried to use him to see his value, but the misses are awful. I really want his costume, because I haven’t used him for a very long time and I won’t.