This thread is for discussing strategy related to Anne, as well as your thoughts on Anne. 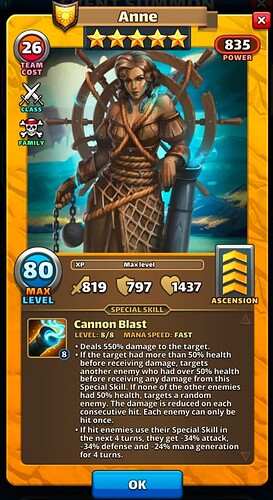 There appear to be no changes to Anne from last-seen Beta stats, skill, and design.

What do you think of Anne ?

This thread is for thoughts and discussion on Anne.

Based on preferences Forum members have expressed, please try to stick mainly to Anne and not wander off topic too much to other heroes.

*NOTE: Summon Results posted without any commentary/feedback at all should be flagged as Off Topic and removed, based on preferences expressed by the Forum community. Please include some comments about what you think of Anne when posting Summon Results. In addition to opinions about Anne, you are also encouraged to include how many Summons it took before receiving Anne (or how many Summons you’ve done without receiving Anne), so other players are presented with realistic experiences of the rarity of Legendary Event Hero.

Is Anne worth Summoning For?

How many copies of Anne would be useful to keep & Level?

What do you think Anne’s Primary Purpose is?

What do you think of Anne compared to other Heroes?

How does Anne’s Special Skill and Intended Purpose match Anne’s Base Stats?

Is Anne worth giving Fighter Emblems to?

In Defence, where do you think Anne is best used?

How do you think Anne is best used?

What do you think is Anne worth Limit Breaking ?

If you would emblem Anne then which Emblem Path would you select ?

Hi, @PlayForFun it should be 5* Holy in the thread title.

and Anne will kill the game for everyone except the whales. this is ridic

Thx, I have fixed the title.

Lol, everytime they come up with another super OP hero i think, that cant be, how can the release these heroes and still think, they won’t break the game.

This hero as a fighter, in fast, with these stats and that Skill…

If you fire her first it’s a good Chance that she Kills nearly everyone and the surving Team cant use their Skill for four rounds or the will be so crippled that all is lost anyway.

Which means, only a few people get her and will win everything or a lot of people will get her, all the top alliances and defs will have her and after two or three features of this hero, she will be nerfed to the ground.

Most likely this will be the Case to get the Maximum amount of Money.

everyone chases and they nerf her. shes like khufu but fast. theres really no point in spending anymore unless you are a whale. the game was enjoyable even if you werent a whale but some of these heroes are just simply OP to the point where even if you start the game off with a diamond, you still lose.

Heck, I’d almost tank her, and have fast hit 3 flanks. If she goes off even once the match is done.

The maths for pulling Anne is incorrect since she is a non-featured hero like Ma’at (unless SG has done a last minute change). This means she is clumped together with all the other non-featured heroes.

There are 5 classic events, with 5 heroes in each giving a total of 25 heroes. 3 of them are featured (LOTL, Jabber, Snow) leaving 22 non featured. Anne is added to that pull meaning there is a 1 in 23 chance that if you pull a non-featured hero (1.5% chance) you will get her. Thus, the chances of pulling Anne in a single pull is 0.065%. I made a post about these predatory tactics by SG here.

Ok, I have removed that part from the OP to avoid confusion.

but as I hardly ever get the hero I actually want I’ll try not to end up spending more than I planned this time … here’s hoping rng is on my side this time …heaven knows it’s not been going well lately… best of luck in the portals everyone!!

There is no way this hero should be fast. Average she’s still strong but fast makes her way too powerful. I understand you are trying to offer Yellow tanks stronger than the purple ones, this is just too much.

Worst thing is, lots will chase her, lots will get her, even at those impossible odds, and not only will they nerf her, they will nerf all the pirates.
Because heroes that stink really and have 4* stats really need cuts to family bonuses and such, which is often times the goto for the first chop.

Same with Halloween. It will be be poor Victor, Francine and Vanda who suffer.
They were given an awesome passive, but their family bonus was nerfed when the new heroes came out, and it won’t be the new heroes that suffer the most from the coming hammer.

Guess am saving my challenge coins until she is featured lol

Yeah the Halloween family bonus is pretty good. I luckily got Miriam. Hopefully it doesn’t get nerfed

If she is realesed as she is, and then get nerfed a couple months later when she took the majority of defenses, and SG toned her down, then you know again how SG business practice works

Btw how much percentage of her 2nd hit, 3rd and so on?