I am playing the game nearly 5,5-6 months. I have been quite lucky with my summons, but not so much with the mats, especially from the titans. My roster is the following: 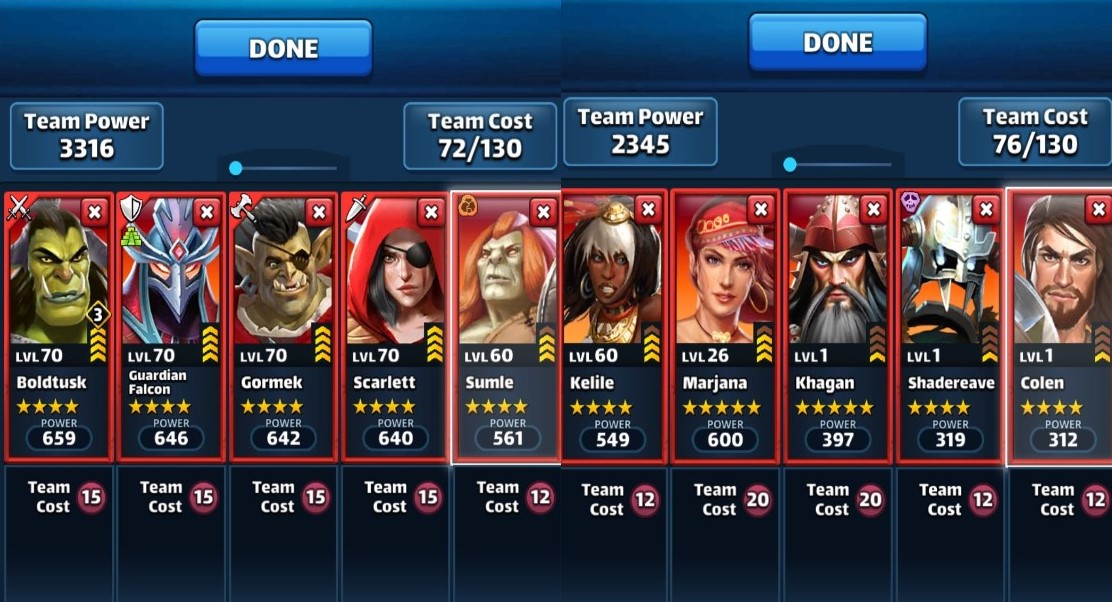 Has anyone, more experienced than me, any suggestions of what I should work next? It doesn’t seems that I will aquire any Damascus blades any time soon (only one since the begining), except from the rare challenge in 1 week.

If it is also possible, can you give me a hint for a defence raid team. I am currently sitting between 2050-2150 cups and I am tired revenging teams 4000~. Or with my heroes (until I develop a full 5* team) this is the ceiling?

Thank you for your patience reading a long post, and excuse my grammar mistakes (English is not my native language).

I drooled over my first 5*, Leo.
And quickly went to work on him. Once you ascend them past 3.7 the climb to 4.8 is long and treacherous.
Especially…early on!

My advice is to make 10 3*, 2 of each color.
Choose them wisely and you can get decent rewards from tourneys. I have even received a telescope once!

And when that is done, you should be closer to having a base (farms) to support leveling 5* heroes. If you do it too soon, like I did…you will discover them to bog down your progress.

Another suggestion is, once you start leveling a hero. Finish it! Get your 5* to 3.7. And play with it for a while. Decide if you believe it is extraordinary and want to advance it further. Materials are more rare than heroes for some people.

Dunno about you but, I level my heroes in crops of 5
And don’t give off-color

Thanks for your responce!
I have over 15 3* maxed (i have not included them in the roster, and several dublicates 4* unleveled, ex. Rigard, Kiril, Grimm, Boldtusk), and over 16 4* maxed.

I stopped leveling Tarlak, because I got Heimdall.

Which tank have you chosen? Heimdall?

For Heimdall you want fire damage flanking. And for you, That’s Marjana!

I would load Heimdall’s flanks and wings up with damage. Isarnia to the other flank, has strong potential. If you happen to find her costume, she has the highest attack in the game. For now… also, lowering defense is an important skill for titans and raids. Also also, you can replace her later if you find something with speed. Thorne is not scary. When you fight one, you will see.

And then purple and yellow wings. I like Kage on the left, to get early dispel. And Joon on the right, another kill shot. Poseidon is also great.
I haven’t made my mind about BY yet. I think he maybe better for offense against defense that have several fast snipers

For defence I was thinking Kage - Poseidon - Heimdall - Thorne/Isarnia (something else?) - Marjana.

You’ve gotta max some of these first… And TBH defence is a really unimportant thing until much later on.

Ascend heroes that are useful to you on attacks (raids, titans, events/maps), worry about defence once you’ve got 15-20 maxed 5* heroes but until then don’t ascend heroes specifically for defence.

Ps… Kage sucks on the wing - far, far better on the flank.

Thanks! Any suggestion of whom my second 5* must be? I finished Merlin and currently working on costume Rigard

You’ll want to do Sabina first… And Tibs costume needs finishing by the looks of it?

I havent touched Tibs costume yet. Only Rigard’ s costume, that I am currently leveling. Do you have any sugestions regarding the other colours? For example Almur or Melendor first, etc?
Thank again!

I’d stick with building out your 4* bench tbh, as I see no D blades, and even then, that’s a slow process… you’ll get more out of the 4*, and by then you may have the mats to do more 5*

So for titans, you’ll definitely wanna always bring in Wu vs purple and red titans (maybe green, depending on how much you can deal with his misses) and Tarlak vs the rest.

Thanks a lot for the effort to write such a deteiled answer! It helped a lot! I am trying to pull Wilbur for 5 months, with no luck until now, but I will keep on.

Kashhrek… It was my first and only 4* green for a long time. When I decided to level him to the final tier, came Caedmon and I favor him over Kashhrek. I don’t like the later very much, so that is the reason I stopped him at 4.40. I can’t seem to be able to persuade myself to max him (if only I had his costume!).

I know Mist is very good (I have her in an alternate account), just pulled her a few days ago.

As for the Titans, the teams you suggested are the exact same teams I am currently using. (except Mist of course - she is unleveled).

Again, thank you for your answer!!!

Excellent advice here. I agree with almost everything stated.

I would add the following:

You brought me luck!. Finally Wilbur AND Proteus! in a single 10pull

You’ve already got some great advice up there which should keep you busy for a while! Only 2 things to add:

I am doing one per colour. I already have a maxed Nordri and indeed he helps a lot. He fires at least once. Our alliance is battling against 8* and occationally 9* titans, so he can fires at least once with the help of mana potions (and a bit of luck not been targeted first)

I level my heroes to the end, unless I find one I really want, who is much much better than the one I am leveling that time (that happens rarely). Then I finish the current tier and stop.