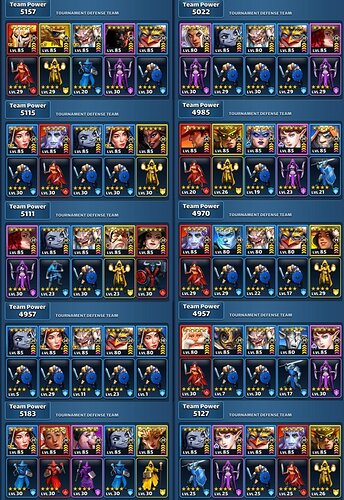 Yeah. Plus plenty of MnM.

Blue is my weakest colour so I don’t have a good tank or defense for them, so I will just have to stick with purple I guess. Blue is where I lack the most. Purple and Green are my best

I look forward to losing on Day 2 and being out of the tournament though, M&M and Waterpipe.

Blue is my weakest colour so I don’t have a good tank or defense for them, so I will just have to stick with purple I guess. Blue is where I lack the most. Purple and Green are my best

I look forward to losing on Day 2 and being out of the tournament though, M&M and Waterpipe.

Same here, My best blue tank is Krampus, but he’s just too easily countered these days, so instead I’m probably going to go with a yurple center and red wings.

And don’t sleep on Hannah! Last two bloody battles I tanked Hannah, and my defense was at least B grade the whole week, or mixed A and B grades. I think people severely underestimate her, and forget the attack debuff is tied to the fiends. So unless you block the ailment with Emilio/Vanda, or block fiends with Gaillard, or bring a fiend remover like Esme (complete waste for bloody battle IMO), at least 2 of your heroes will get a permanent -20% attack, and that can be crippling for bloody battle.

I’m going to stay with a Krampus tank…
First draft: 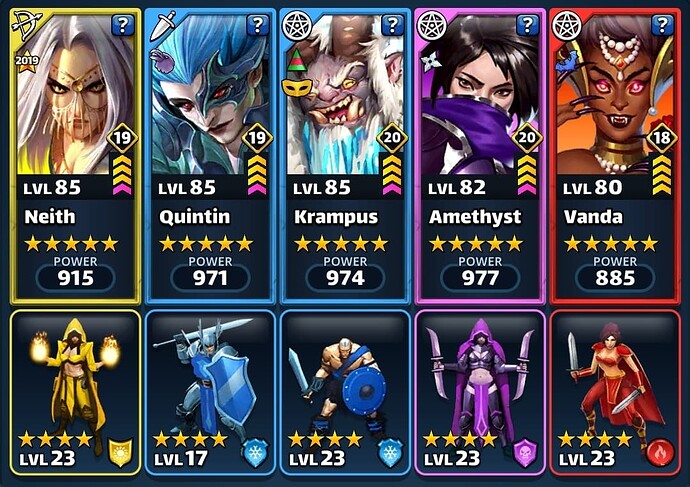 Considering everything y’all are saying, can I make a defense team from these guys? Any recommendations for an attack team that won’t be 5 up, 5 immediately dead?

Any help is appreciated! Ive also included a screenshot of what the sysyem “recommended”. If it’s not okay to ask for this kind of help here, please let me know and I will delete this post. Thank you! 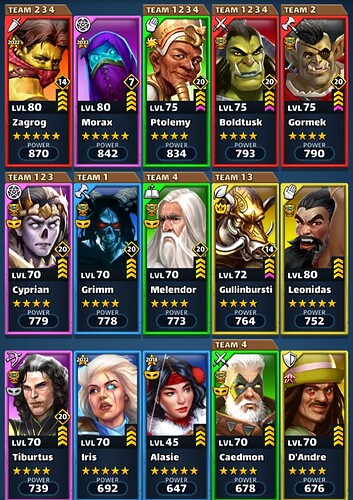 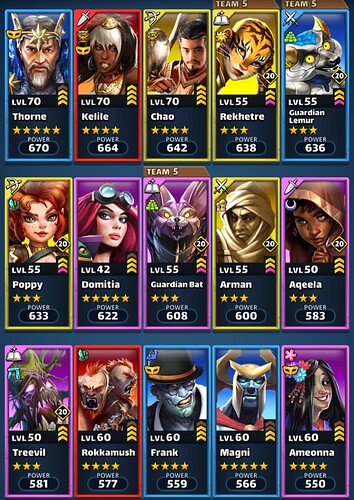 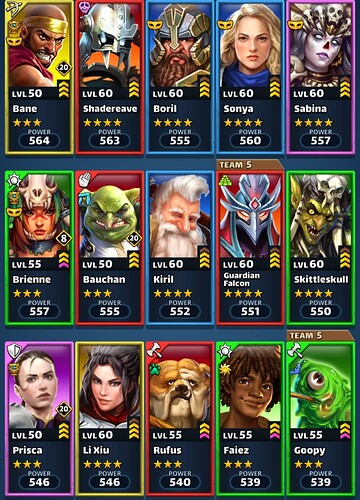 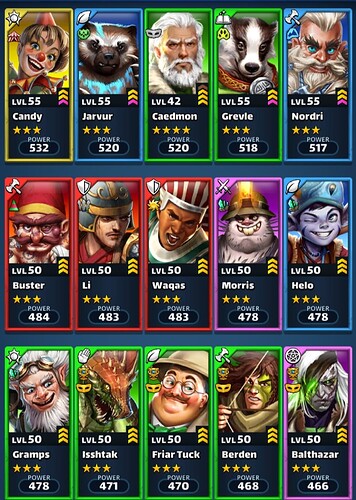 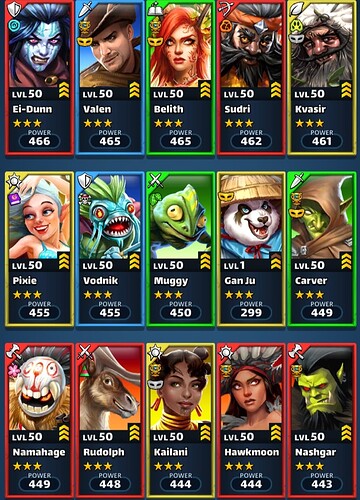 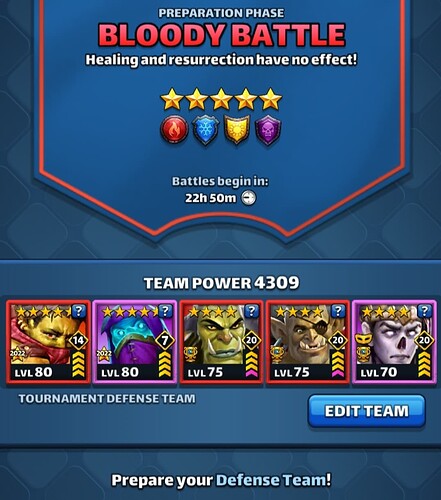 I’m going to stay with a Krampus tank…
First draft:

Well I’m just screwed in this tournament, before it even starts

. I think 5* and 3* bloody battle are my worst tournaments (Yes, I like rush attack a lot more than bloody battle in general) in the game no matter what restrictions they have. And no green means M&M, Waterpipe or Sobek being hardcore, not that I would use green heroes against M&M and Waterpipe tanks normally, my green 5* roster is quite miserable lol, so it really doesn’t matter which bloody battle tourney would they appear on tank to me.

I’m also horrible most of the time at making defs for bloody battle tourneys, I’ll try this. 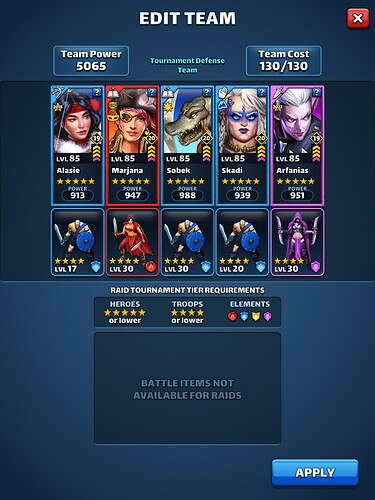 My Xiaotu and Laohu say “thanks for the easy win”

No but seriously at your level, it’s safe to assume everyone will have (multiple) LNY heroes by now, so I’d at least consider not doing double waterpipe

That’s where my Waterpipe went! 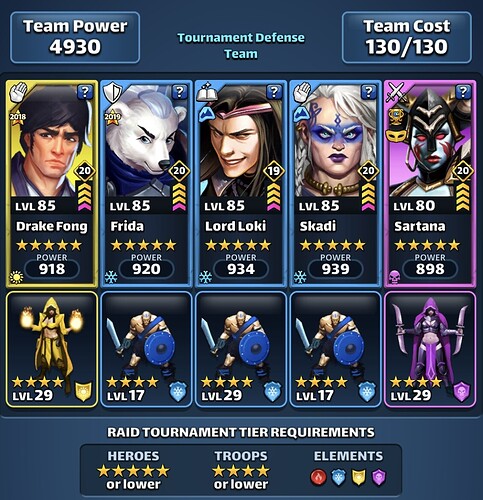 All players with Waterpipe should bench him immediately since the new lunar heroes are out. I’m definitely not going to be using him this week.

-Sincerely, someone with neither Waterpipe nor any lunar heroes.

Here is my attempt at a team: 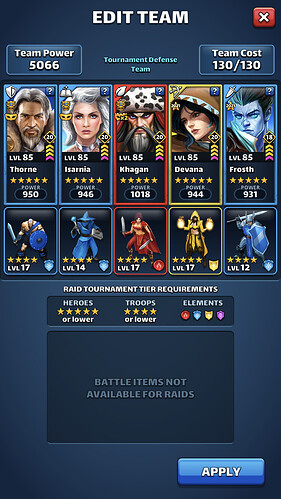 Devana will be doing her best Mario brothers impersonation for @Liam_K

I’ll just use this and see what happens. 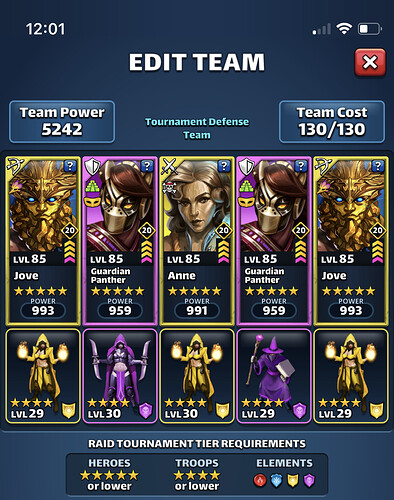 So I can only try to avoid E grade… 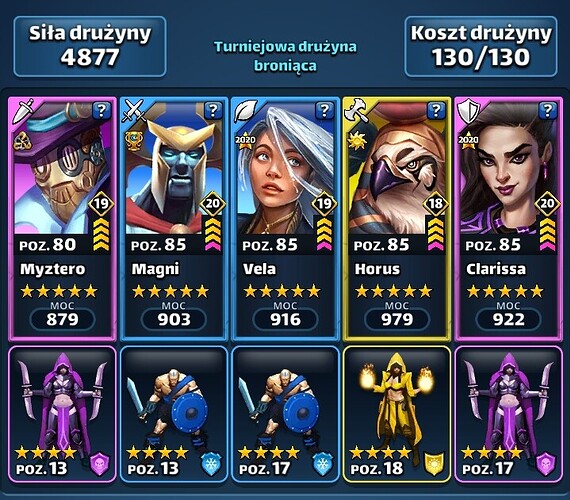 5-0 start as I usually start against ‘weaker’ opponents due to my TP. Only one M&M tank and one opposing team above 5200.

Used the same 4-1 attack every match. Cristobal is not available so replaced him with the newly maxed Ruby as the sole non Dark to go with Onyx - Khonshu - Hannah - cVictor. Boards were good and killed all the tanks before they could fire, even a VF one like Hannah. 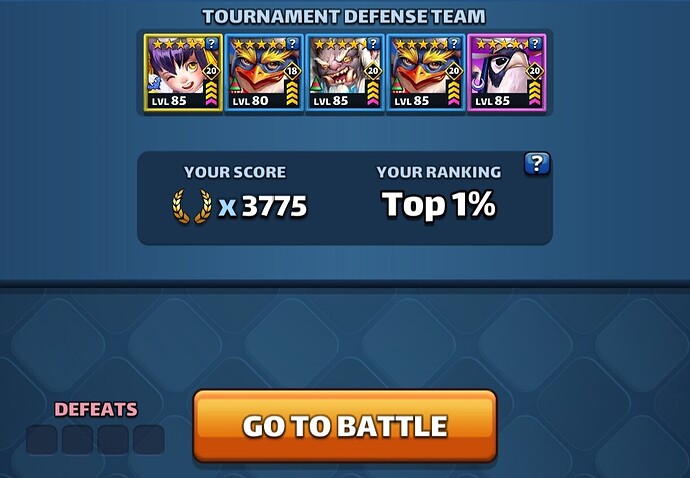 5-0 in offense so far. Been blessed with good boards today.
Defense is till 0-0 didt get hit so far. I built my defense last second therefore it is a freakin mess :
(Sun Shanxiang- Alfrike - Azmia - Xiahou Dun - Anastasia) pls dont judge me for it xD

wow wow wow and wow today was terrible.
o: 3-2
I lost what I would class as simple matches against easy teams, I just had no tiles at all in any of them, so I got obliterated.