O: 4:1
D: 2:0 At the end I went with - Alasie, Kara, Sobek, Skadi, C Marj. Sobek is harder to kill and activating taunter hero, which are all either average or slow mana, before Sobek fires is surely a hard task and Skadi possibly killing minions as only possible source of ‘healing’ can be also nasty. But it’s only 2-0, everything can easily change.

Lost against Hypnos, Cao Cao, Krampus, Anne, Pengi. Went with Frida, Mitsuko, Alasie, Kara, Sobek.
Not the hardest, but also not really easy def, if board is dry on colors you need.
Maybe I should’ve taken Skadi, but it wouldn’t change anything, only hero I charged was Mitsuko and Pengi killed himself on the reflect. Anne and Hypnos both fast charging completely annihilated everyone, Cao Cao didn’t even fire once, maybe I should’ve made him kill himself too for more points

1st Waterpipe tank - immediate 0, then 2 4* passive heroes in the defense team - Azmia tanking. still lost cause C Finley, Khonshu and Lepus are fast and board was

again. The next defense team again nothing too difficult normally, but still lost…

I should’ve just used Junaid, GM, C Marj. Erebus + taunt every flag. I need just 7 red tiles to charge them all and it’s mostly not hard to find them. yes it’s red against blue, but that doesn’t really matter.

Difficulty jumped up straight away on Day 2 with the first match against a 5300TP team of Jove - Quintin - Oniwakamaru - Ogima - Bastet. Attacked with the same Onyx - Khonshu - Hannah - cVictor - Ruby team. Managed to kill the tank just as he was about to fire, but Quintin hit Ruby and Jove followed to kill her off. That meant the abundance of Red tiles after that were useless to me. Not a zero at least.

2nd up was a Blue mono defense with M&M tank. She fired but luckily the boost doesn’t work here so once I got the Purple tiles, could win with minimal difficulty. Won the next against a Fortuna tank as well.

4th was an Amethyst tank so switched a 4-1 Yellow team with Matilda - Devana - cLeo - Eloise - cVictor. 3 Yellow tiles down the middle didn’t manage to kill her and she gave her fiends to my middle three. Got 6 more Yellow tiles and it became a race to see whether Matilda’s fiends or Amethyst’s did more damage, which thanks to the Poison damage, my team won.

The last match was against an M&M flanked by 2 cPanthers with Ogima and Anne as wings. Got 6 Purple tiles but also Red diamond so Ruby at 2nd charge just cut the middle 3 and killed everyone without them firing. If only all matches were this easy

So, an update here on Devana as Waterpipe counter. My last battle of the day was against this team: 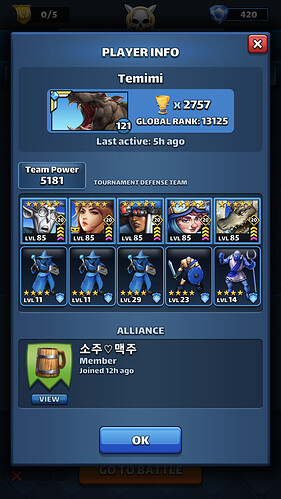 I got Devana charged just as Waterpipe went off. Naturally she resisted the mana down so she could still hit three and take out three minions. The next round, her mana boost offset the minion mana down for Waddles so I could activate him. His mindless attack tripped Sobek, Galliard, and Tinsel in one turn. Isarnia and Thorne were able to finish off the right side and I could cruise from there. It isn’t always going to work like that, but I love knowing that it can work!

There is something wrong with rankings in this tourney. I won 4 fights but in the ranking it shows 0 points and rank like 851K.

Hear hear, had the exact same experience (4:1, 2:3). Doesn’t matter how good your own team is or how passive the defense is, if the tiles don’t come on time you’re doomed. Maybe should just go with a vf team and ignore all strategy lol.

Bought back in because defense is doing ok, but won’t be buying back in a second time.

And… im out. Thank you very much, maybe next week I will be able to participate and actually have a chance to have some fun with a tournament. 5* are a ■■■■■■■ waste for me with all these flashy fast heroes.

yeah, my 6-7 tiles red team is something I use very often in raids against the more OP defs, with quite decent win rate. Should have used it here. My win rate would be surely better than 5-4

, or maybe it wouldn’t, everything can happen.

Day 3 and it was the best time to get good boards. Most of the time, could wipe out the opposing heroes before they charged with my 6 and 9 tile teams.

Went twice with my 4 Yellow team (Matilda - Devana - cLeo - Eloise - Onyx) vs a Diaochan tank and a c2Obakan tank. Onyx was there to counter the Krampus in both defenses. In the match against Obakan, he reached 3rd charge and blocked everyone.

Toughest match was against an Alucard - cPanther - M&M - cPanther - Jequn team. Went with my VF Purple + Ruby team. Not a lot of Purple tiles, but a Red diamond meant only one of the 2 Panthers fired and managed to kill the rest before the other could finish the job.

Defense was A again on Day 2 at 6-4. Currently at 7-5 (B) but enough for a rare appearance on the Leaderboard of a 5* tournament. Feel like a dolphin swimming among the whales

Took my 2nd loss of the tournament today. Facing a costumed defense of cMarj - c2Magni - Freya - c2Leo - c2Domitia, attacked with 4 Yellows + cVictor. Board looked good at the start with 7 yellow tiles down the middle. Killed Freya, but mana cut meant that the next 3 yellow tiles only charged Matilda. An untimely cascade saw the opposing cMarj, c2Magni, and c2Leo firing in order. There was no coming back from that.

The other 4 matches continued to have great boards. It didn’t matter that the opponents were over 5300 TP or had Waterpipe as a tank. Just killed all the tanks before they could fire, and didn’t lose a single hero.

Defense has been borderline A the whole week and is continuing to stay above that line at 11-7. Exceeding expectations on both ends.

Good luck to those still in the tournament!

Hear hear, had the exact same experience (4:1, 2:3). Doesn’t matter how good your own team is or how passive the defense is, if the tiles don’t come on time you’re doomed. Maybe should just go with a vf team and ignore all strategy lol.

Bought back in because defense is doing ok, but won’t be buying back in a second time.

Managed to make a miraculous comeback from this disastrous start, and as long as defense can keep even a C I should make top 1%.

After day 2, took a little bit of time to regroup and rethink my strategy. Decided that against very aggressive and fast defenses, speed would be key. And somewhat surprisingly, against blue hitter heavy defenses, a red stack using cMarj as the centerpiece actually works surprisingly well, since she gives a -34% atk debuff which really helps with survivability (especially against the likes of Sobek). And so against three or four blue heavy/mono blue defenses, utilized this red strategy and managed to win (support heroes usually cFreya + Krampus)

), and while the LNY heroes definitely gives a significant advantage, against extremely aggressive teams it’s still a tough fight: 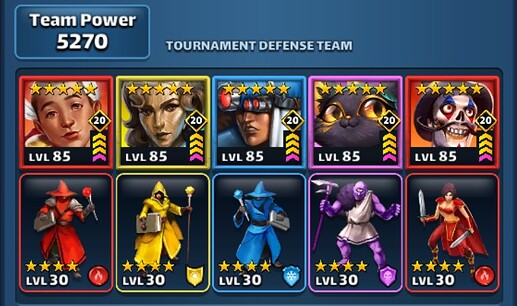 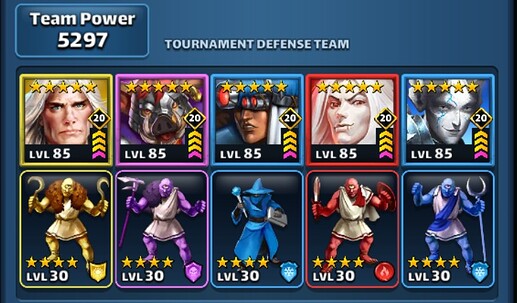 Defense is doing ho-hum with mixed A and B grades: 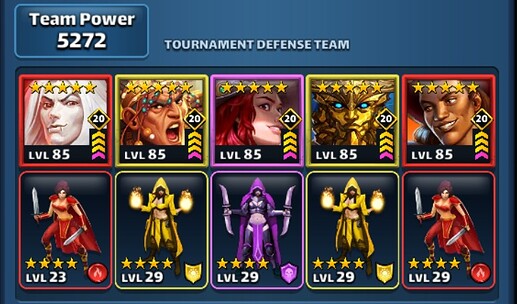 I was debating between Hannah or cFreya as tank, and normally cFreya would be an obvious choice. Bu given the LNY heroes and the ultra minion killers such as Ogima and cSkadi, I decided not to risk it, as the minions could easily become a liability, and cFreya’s dodge does not dodge passive dispels.

Well I feel like cFreya set a curse on me for having so little faith in her, as reflected in the defense grades. And also I faced a cFreya team very similar to what I had in mind: 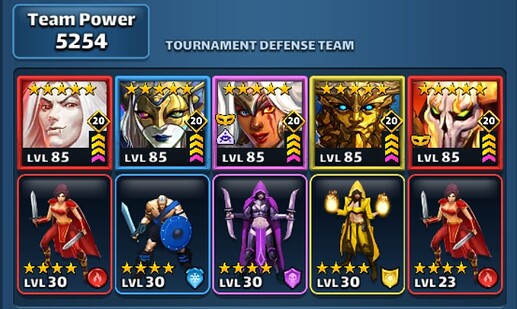 I took out cFreya and that was it.

Instant regret not tanking cFreya. Oh well lesson learned for next time (and next W3K in march as well).

Well 1 nice thing about this tournament, my def is holding a very close A, though it sadly once went down to B.

A great week ended with another perfect day. Kept mostly with the 2 attack teams that have been successful so far.

First up was a triple riposte defense of cSif flanked by cObakan and Bennu. Switched Ametrine in place of Hannah for her dispel before hit. Killed cSif with 6 tiles and then ghosted 3 more down the middle to get both Onyx and Ametrine to 3rd charge. Battle was certainly bloody in a good way

Thought I had lost one match with this opening board. 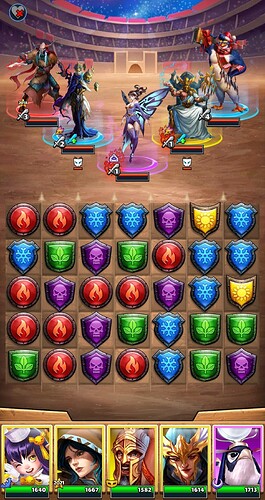 Guess it was just one of those days. 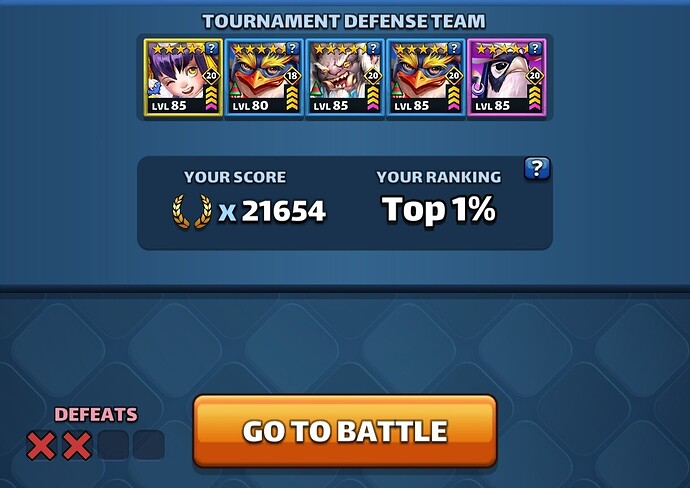 Good luck on your last attacks and with the loot tomorrow

Bloody Battle seems to be the one type of 5 tournament that I do well in. 23-2 in each of the past 2 and top 1% in all 4 of the current cycle. It helps I guess that I raid without healers so have plenty of practice.

Defense just failed to hang on to an A on the last day but that’s a minor quibble since 22,304 is a new all time record score. 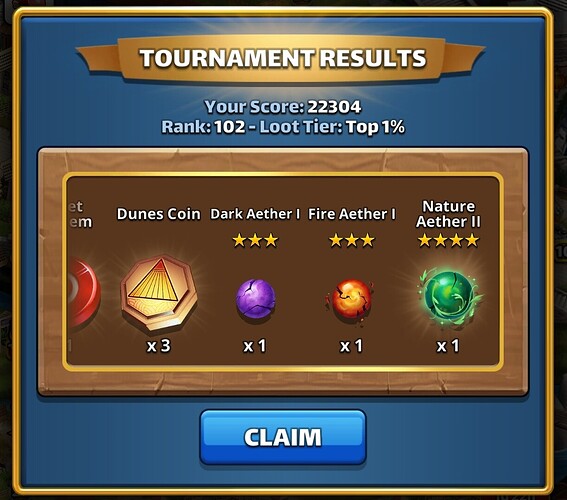 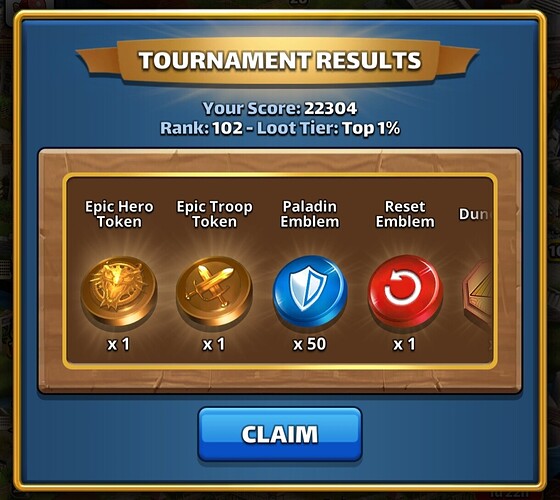 See you all next week. Finally a break from 5* tournaments. But not from Treevils 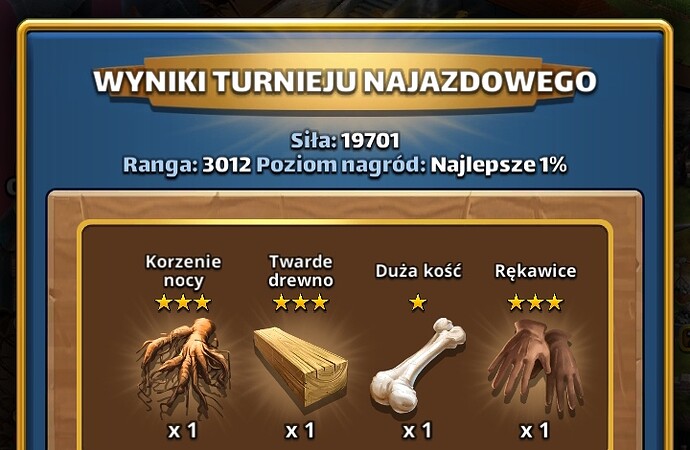 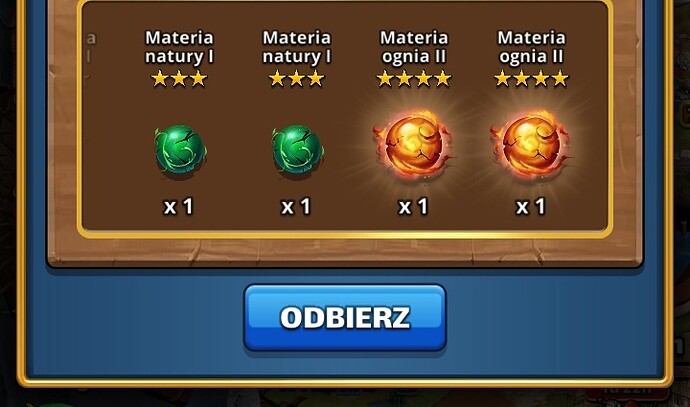 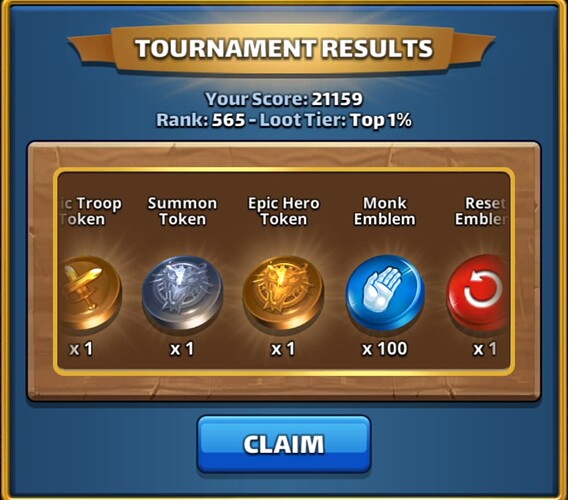 How I wish every 5* tournament was Bloody Battle