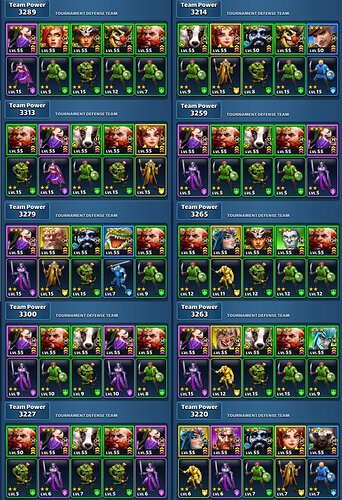 Looking forward to Faiez tanks. He’s slow but he should last with no red long enough. Dawn flank should be once again way to go, especially since she also provides a buff. And Slayers for the mix. Thankfully no Waqas or Sudri.

I’m thinking about running Faiez and Costumed Belith together. But then I’d like to put Shrubear in too, and that’s a lot of passive heroes together. To complicate it further, I’ll finish Noril tomorrow, with 20 emblems. I don’t know, I might end up with an all green defense…

I also could do an all green, but maybe instead i could try and power LB my Brienne +18 for this, throw in maybe Jouk and Faiez, and the slayers.

Dölgöön has served me well as a tank. I propably just use him with 4 norils

First draft, wondering if one healer on the tank position is enough though…thoughts are welcome 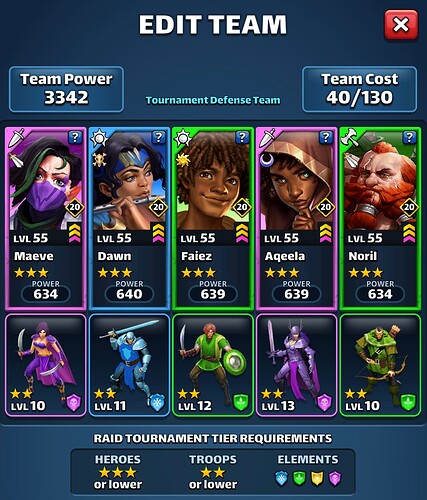 Thinking of going - Sally, Aqeela, Faiez, Jouka, Poppy. Would have run 2x Poppy on wings, but I haven’t leveled second one yet. The thing is Jouka deals 6 turns of uncleansable immunity against buffs against nature heroes, so the deal here is that people will take greens and they need dispel + cleanse won’t help them as it’s uncleansable for them. But my Aqeela is not LB yet, so maybe people will stack yellow as she is the weakest link there… that would stll be bad for attacker if they won’t take any dispel though, Idk. Slayers would be good here too, but they are not LB yet. They did ok last bloody battle tourney, but still. Don’t have Dawn.

I don’t really think going all green in defense is good, especially a lot of green 3* are passive with no damage dealing. But I mean if the passive heroes got buffs, it can still be annoying with the multiplier, as the slash attacks will become super strong. I have a feeling some players will run double or even triple Faiez + CB Brienne in some defs, just to annoy the player

. But I mean it can actually be pretty devastating when I think about it. I would not level+emblem+LB 2-3x Faiez just for this occation though… But I might keep second Faiez for rush wars. Sad thing is that I didn’t think about it before and so far I kept only 1 Faiez. Would probably try the 2x Faiez and CB Brienne for defense this tourney to see how it performs tbh

Who is better tank for this event? 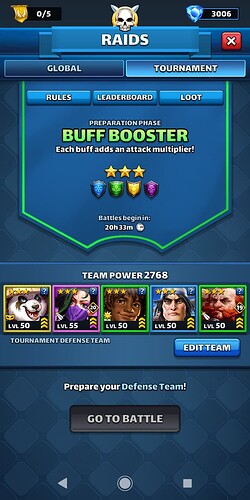 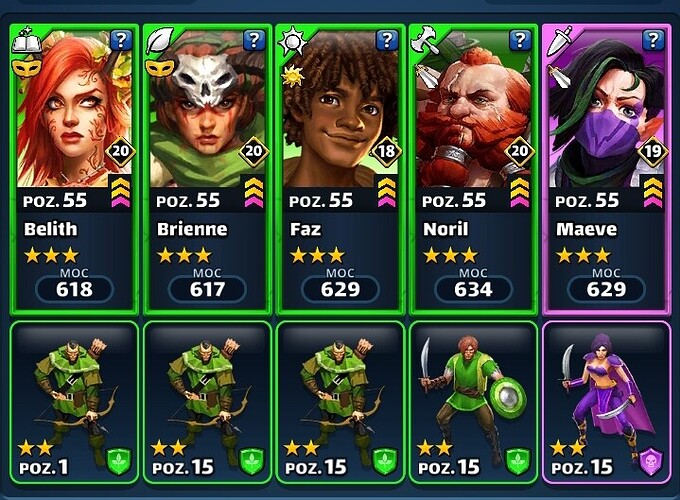 I need 1 more small aether to LM Noril, Maeve is only 2nd ascend and I run out of food and feeder to level them. So, I decide to go with double Poppy instead 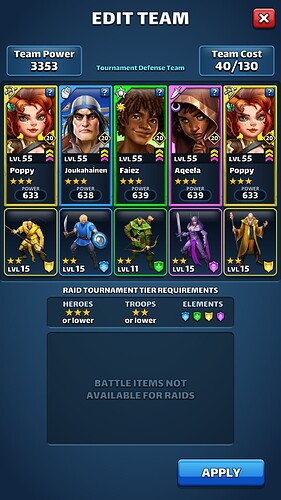 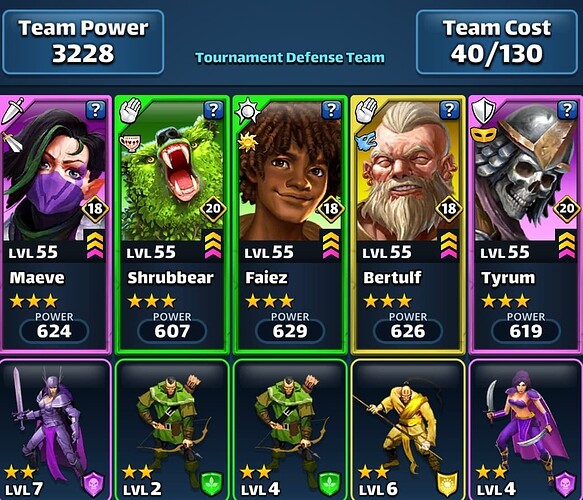 Costumes will be LB’d by tonight

ok, so here it is, currently thinking: 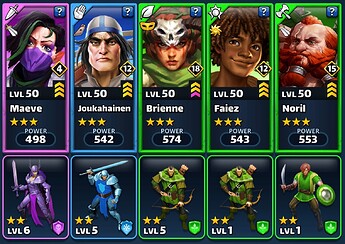 maybe switch Faiez and Jouk? or Brienne and Faiez, or maybe work cTyrum in there somehow, maybe instead of Maeve. I can +20 Brienne for the mana node, and i LBd her but i don’t know that i’ll have the food to finish leveling her up to 55.

other options: i have cBelith but not a lot of emblems to get her very far. or Poppy currently at +12 for more damage, who i’ve been meaning to give some more and have some. (and i also have a Poppy #2, but still in the works

If last week was all about speed, this week’s attack strategy is endurance.

Went with Faiez and Rekhetre in all attacks. Maeve and 2 Norils completed the lineup against Green and Blue tanks. The Slayers stacks are considered buffs in this tournament, and help in both healing and speeding up their mana which mean they get faster the longer the match lasts. None of the matches today went into overtime, but fully expecting some this week.

Toughest match was actually against the easiest team on paper 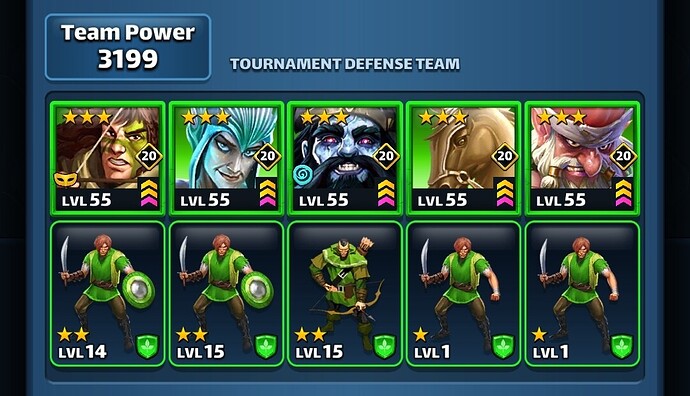 Mono Green with Level 1 1* troops, but got an awful starting board. Maeve and 1 Noril died before I could get anyone charged. Luckily both Rekhetre and Faiez got their boost working, and the last Noril with his 10 stacks survived to finish the job 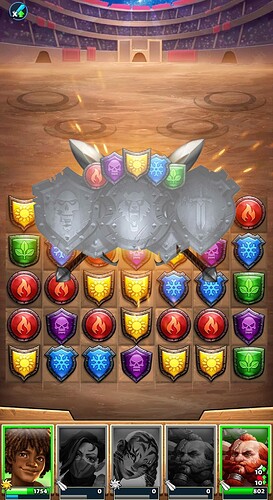 Last match was against a Rekhetre tank with Faiez and Joukahainen flanks, so went with a Dark stack of 2 Maeves and Aqeela. Took some time but was in no danger of losing.

Defense has yet to be tested 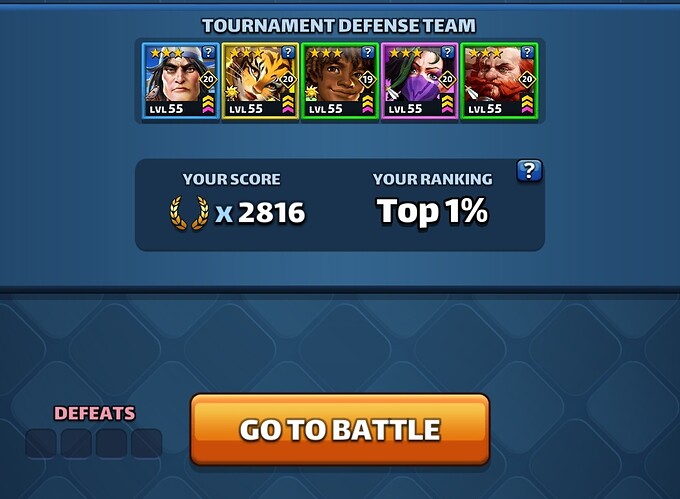 Lots of players started 5-0 based on my current ranking. Good luck everyone!

I am still finding the best tactic for me. The overall board is pretty good. No Faiez tank today.

Work well in 1st and 2nd attack. And then I face Rekhetre tank with Faiez flank in 3rd attack 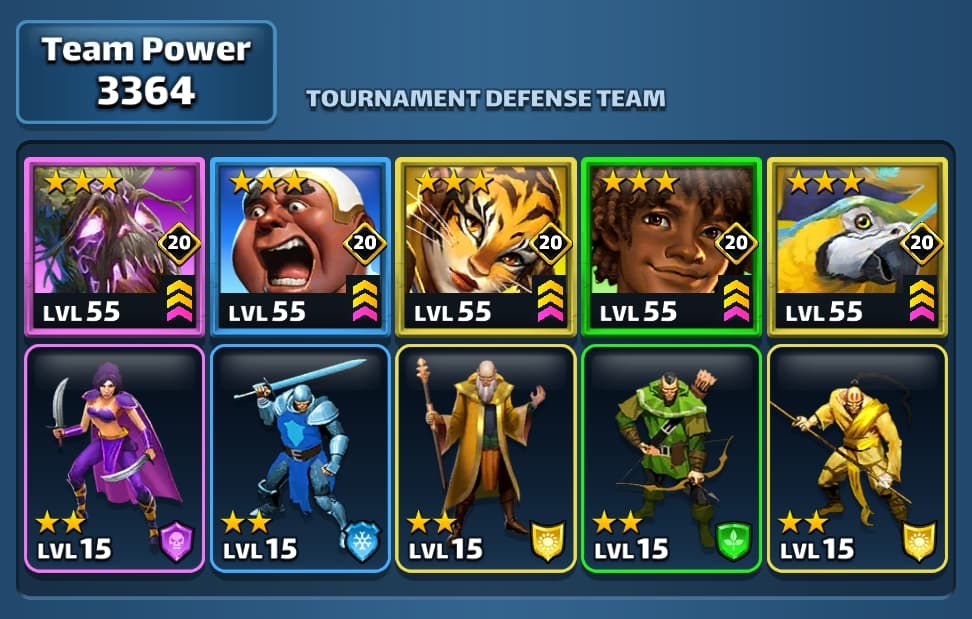 Go with Rekhetre + Kvasir + Aqeela + CB Tyrum + C Tyrum. She is so tough. Once she go off, even x3 dark stack can’t take down her as Faiez flank also keep healing her and boost her hp. Both enemy Treevil and Sally fire many time, but my Aqeela do very good job. Aqeela is the best counter against Sally since she stop the chain. At the end, I go to overtime. Big purple cascade kill Rekhetre tank after my CB Tyrum dispell her. And then I slowly kill the rest. I think I should take Joukahainen against that team

After that, I try Rekhetre + Kvasir + Faiez + C Brienne + Mnesseus/Whacker. It seem to work well as I don’t face anymore Rekhetre or Faiez tank

Other board are good. No problem. So, 5 win

Good start with A grade

unremarkable day on offense, just took my defense team for offense, boy when it goes off, it goes off with a bang!

loss was (surprise!) to a Faeiz tank. just couldn’t find enough green tiles until it was too late or blue tiles for Jouk period. Noril did manage to take Faeiz out before it was over, so not a zero at least.

good luck on day 2 everyone!

Wow you freaked me out, it says Day 2 in your post, I thought I had missed an entire day but it’s only Tuesday now and still 11 minutes before the new round starts.

I used 2-2-1 on all attack.
I have been against 2 or 3 treevils, but not had problems with those, my problems were with other.