Why use Def Down Elemental and Def Down Normal in one team?

In a single-color team, why use a normal defense and elementary defense hero? Ex: Nordri and Gunnar in costume, wasn’t it enough to just use Nordri or should you use the two heroes, do the two defenses add up?

do the two defenses add up?

Yes, they add up

Edit: only works for tiles. Specials work differently. See below.

Thank you very much for the doubt friend, it helped me a lot.
At the event, I’m going to Gunnar in costume and Nordri.
hug.

You do this because it is brutal and destructive!

I simply LOVE my elemental-def-and-normal-def-down combinations.

With the help of the bunny from wonderland and the Guardian panther I could manage to earn high scores versus every titan. But because I haven’t got them my scores against yellow titans are low. The ones against purple are still high cause of the two Jackals and, of course, Wu Kong. He is with me against every titan cause of the lack of other attack buffer like Tarlak, Miki and others.

Just try them (one def down and one elemental def down hero) and you will see pure joy against nearly every enemy!

Elemental and general defense down stack on top of each other. Example: my 3-66 G. Panther and +7 Tibs can stack for about 2500 crit on a titan. If I just did my regular attacks with out both those defense downs on a holy titan, I would only be doing 1K to 1200 per tile depending on how the combo is going. It can also in a way replace an attack booster for that specific color.

Note that my damage numbers are coming from a full mono team on a 5 star titan. For a red mono team, you can do BT, Wilbur, G. Falcon, G. Kong, and GM if you have them all. Although I was gonna suggest BK because of the berserker’s fury but he also has a taunt on him so the full benefit of the shared damage and berserker’s fury cannot be fully realized.

Which one should be fired first, elemental or defence down @ThePirateKing

That depends on which of the two hits harder. For example, an emblemed Grimm hits harder than Frida, so usually players fire Frida first then Grimm, to maximize the damage. But in case of Nordri and Gunnar C, Gunnar C should be fired first because he is a passive hero.

Isn’t it multiplicative instead of additive? Or is it capped? I’m trying to remember myself. -98% defense seems unreasonably high for the formula folks use to estimate damage.

There is a thread about how they interact:

Do Elemental Defense Debuffs and Regular Defense Debuffs Stack? Why use them together? For instance, Grimm, Tiburtus, Gormek, Buddy or Wilbur with Guardian Jackal, Falcon, Panther, Arthur, Frida, Nordri, or Evelyn. [MASTER]

To the best of our knowledge, the debuffs stack multiplicatively.

Remember that this goes into the damage calculation inside the exponent. The general formula says expected damage is proportional to (Attack / Defense) ^ 1.35. So a 70% reduction in effective defense basically quintuples the per-tile damage.

This multiplier is damped down by an unquantified but confirmed tempering of the damage as the ratio of attack to defense gets very high. You probably won’t see the tempering much unless you have big stacks of the color.

I thought the def down was only for tile damage unless noted in the hero’s card that it’s def down for SS, no?

No, the vanilla defense down works for special skills as well.
See below: Magni special on the same target with various debuffs. 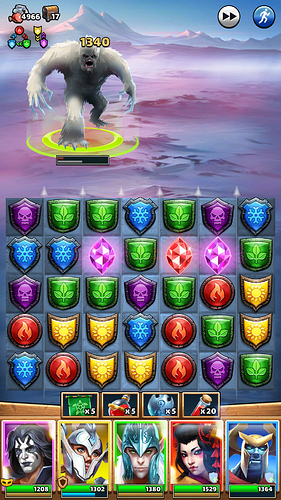 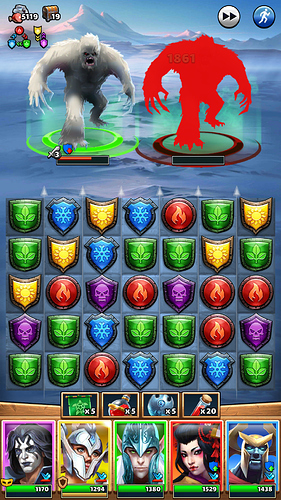 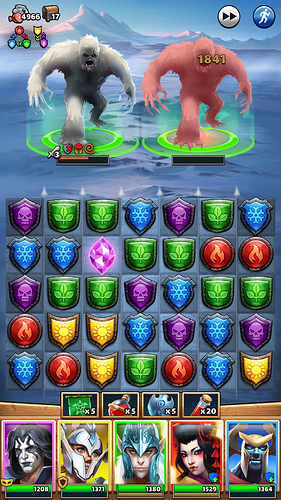 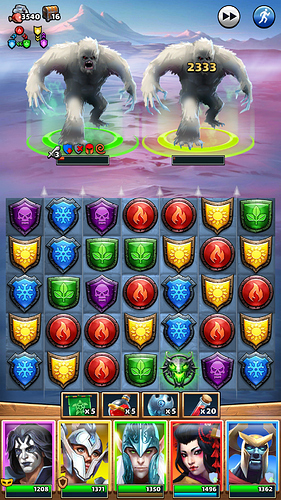 That is the third type, which only applies to specials skills and doesn’t effect tile damage, example Mist. But elemental defense down and normal defense down both work for special skills and tile damage. That is why heroes like Panther, Evelyn, Frida and Jackal are such favorites among top players. Fire them first before your other heroes of the corresponding colours and its total mayhem.