Whom to ascend - Guardian Kong or Marjana?

My Heroes are uploaded for your reference. Thanks in advance.

Marjana if you have her costume. I have both G.Kong and Marjana using both of them in my red mono. No regrets. I like G.kong because cleanse

It’s funny, because in the abstract, I think Marjana is a better hero. She’s the only S1 red legendary who isn’t slow. On the other hand, her “snipe” isn’t much of a snipe, and she’s fallen into disuse on my red mono squad. That currently consists of BT - Falcon - Gormek - Khagan - Yang Mai. I could switch her out for Yang Mai, as neither are great snipers, but Yang Mai’s chance for multi-hit and boost to mana (even nerfed) give her higher upside potential, imo.

I just final ascended Guardian Kong, and I’m excited about him, because FTP don’t get a lot of non-S1 legendaries. His skill at average speed looks pretty boss, but I think he only breaks 500 defense at 4^4 or so, meaning he’s going to be fragile as glass. I’m hoping to offset that with a ton of barbarian emblems and possibly a limit break, as well as pairing him with Wilbur for damage sharing. My hope is that 10 red tiles with a team of BT - Wilbur - Falcon - Kong - Yang Mai could be enough to more or less end a raid. We’ll see.

Agree with you. G.Kong defence is very low but if you pair him with someone who can increase defence or overheal to keep him alive he is really good. He does some massive damage for average speed and cleanse is great. 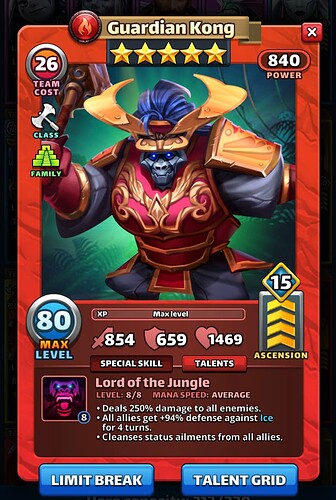 This picture makes me drool. I have over 1,000 barbarian emblems just sitting around waiting. My Kong is going straight to +20 as soon as I have enough feeders. Figure he can use those last two nodes for def and HP.

Here is my Kong mate, few more emblems on him

I think you need a sniper more. You don’t have any finisher

If I were you, I would ascend Marjana 1st.

Here is my Kong

, he is great on offense. 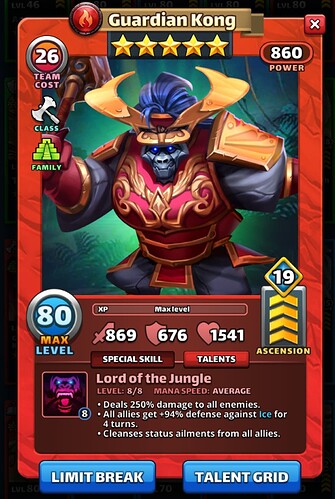 If Marjana doesnt have costume I’d go Kong as he is a beast during events and raids. Cleansing is a huge win for him as well.

Cleanse is a much more precious commodity than damage. To my opinion, this consideration alone is enough to prioritize Kong over (vanilla) Marjana.