Who gets the sorcerer emblems...Mitsuko, Morgan le fay or Rumpelstiltskin?

All three are far from maxed, but I need to plan ahead. Need your feedback on emblemed mitsuko, Morgan le fay and rumplestiltskin. What are your experiences with them before I make my decision

Mitsy- ultility wise would be useful I guess

MLF- fun to use, with DOT and HOT.

Argh… they’re all good. Have no idea who to give the emblems

I emblemed Mitsuko, and I have no regrets. I don’t really have anyone else better though but she’s one of the best sorcerers IMO. No other red hero has a skill that can completely protect you from blue flanks / wings while simultaneously being strong against green.

This path maximizes her survivability, which is what matters most to me as I need her to live so she can use her skill

I completely agree with @DaveCozy , another vote here for Mitsuko. You won’t regret giving her the emblems.

mitsuko for sure, she’s worth every emblem

I started to give emblems to second Mitsuko. And I have a plan to level up another Mitsuko. She is amazing against Finley and Vela. 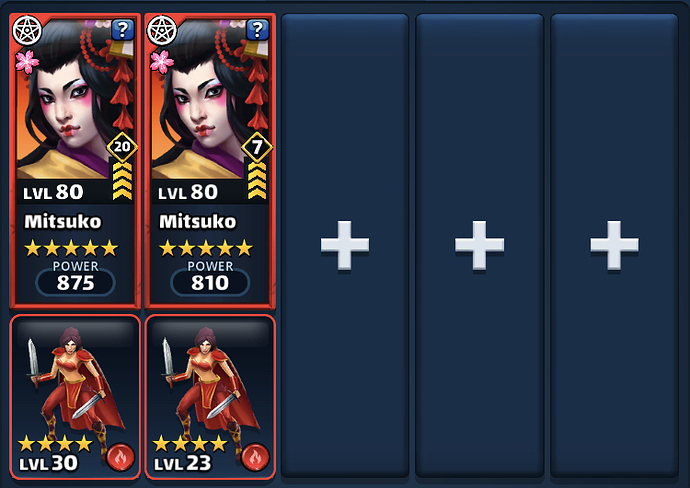 Do we have any fans of Morgan or Rumple on here?

I recall that Morgan had a lot of defenders back in the day but not sure if they have all retired since then (ok, @Guvnor hasn’t retired) .

I have Morgan maxed and like her. She lost the few emblems she had been fed when Ursena became my tank. Morgan is a wicked wing in healing aid wars.

I have both Morgan and Mitsuko And went Mitsuko with no hesitation for the rampant Velas and Finleys. She is a rockstar.

I’d say Mitsuko for sure!

With the amount of Vela’s on people’s defence raids. She will be your saviour.

I wouldn’t say Mitsuko is a slam dunk. Depends on how you want to use her. Will you use her on your war/raid defense? Because she sucks on defense. She’s for offense-only use, IMO.

So if you don’t need her on defense (perhaps you already have JF or GM or Marjana or BK, or QofH, or Santa, or… )

Then the question becomes would you use either Rumple or MLF on defense? And what else do you have for blues or greens that you might use instead, or already have emblems on instead?

I’m not convinced that Mitsuko isn’t still a viable offensive weapon even with no emblems on her.

If you are open to that thought, then she ceases to be the obvious choice that others are making her out to be. MLF or Rumple might get more of an upgrade with the emblems, be it using them on defense or using them on offense.

TL;DR. If you need a blue or green defender, Mitsuko isn’t your slam-dunk answer for the emblems…

IMO on the OP Question tho it would be between Mitsuko & Morgan.

Morgan is the better hero for a defence team BUT she has lost some attraction given that most players run Telluria at Tank these days; particularly in Wars it’s not great practice to have 2x of the same colour on defence…

So my opinion is:

There is actually one more contender in mind, lady locke. If I manage to get her, Morgan will be dropped

My roster contains mits and Morgan, they have been my first 5* in both colors. I had a hard time whom to give emblems.
Now (1 year later) both had been ascended to node 7 and Morgan (atk path) is the one to be continued…
She is on wing in war def and flank in normal def.
Mits gets only use in attacks, but she is very valuable there