And, more importantly, I really enjoyed playing and re-learning how to use 2* heroes.

I maxxed Sha ji Ragnhild Farid Layla and Needler from the bottom up.

If there’s another tournament I would definitely look at Zudak instead of Fardid and maybe an attack or Def buffer, especially for a Bloody Battle

This was truly a pathetic experience.

Bought the offer with trainers to at least play with them using the tournament. Bought 2 times flag refill. Still ended up in 25% with mystic vision tier rewards. Never gonna be that stupid ever again.

One still has to be lucky to get good loot at top 1%. Congrats to all the lucky ones

Ended up dropping to top 5% halfway through the day and my A Grade defense didn’t boost me up. 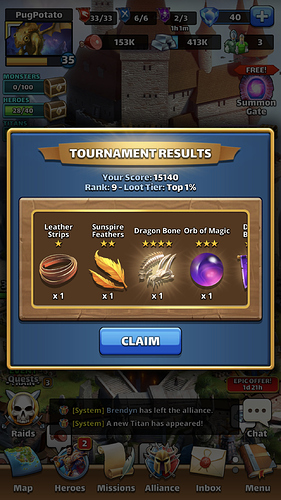 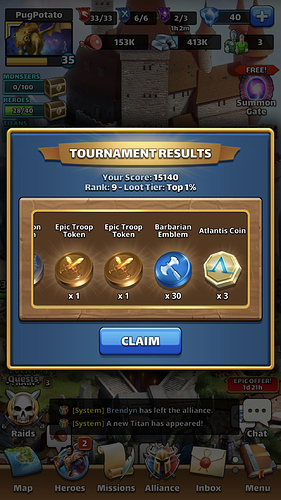 Came in the top 1%, ranked 8824. The loot was a bit disappointing but I thoroughly enjoyed the tournament, lost a few matches that I had no excuse not to win and missed out on playing one attack on day 3. I still think it was nice to see people with a global ranking of around 1.5 million mixing it up with the best of them. 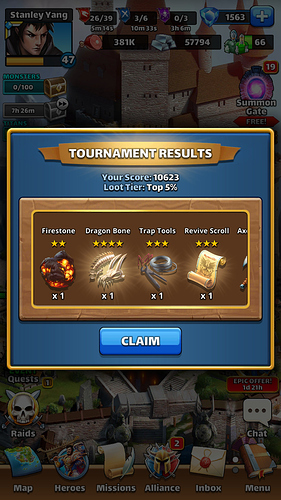 Top 25% after my defense team dropped to D rank. Got nothing noteworthy, but I’m ok with the few free emblems and easy raid chest fills.

Since I got no heroes to train currently, I’m raising an arbitrairy collection of 1 and 2*s in case they make another one of these tournaments.

I fed all my maxed 2* heroes. Since my defense was 20-0, I will do exactly the same thing next time. I will set up the right heroes and after that I will level them up, like I did this time. That’s why I’ve been attacked only by weak opponents. It takes me no more than 3 hours to level the 5 heroes in defense and the rest of the day till beginning to level some more to have the attack teams. It seems this strategy is the safest and easiest for reaching 1%. Yes, I will spend a lot of food, but the ham is free and easy to get. Emblems, epic tokens and items, not really.

Well during the tournament I was oposed to people with level 17, 20, etc…Offense and defense.
In the end: Why not? Its a good way for beginners to participate more in the game and get a chance to win something. I had fun playing with 2* heroes (got 1%

As fellow players, we understand frustration and being disgruntled about an issue, but there are ways to handle it that do not violate Forum Rules. Please read and familiarize yourself with them. Cheers.

Don’t know about 2 star stats but i had a ball in this Tourney. Like everyone it was oh hell build a team quick. I built evenly and didn’t finish the heroes but still pulled up in the 5%. Cost me gems for the last two shots. A waste against the rewards, my choice. I may have stayed in the top 5s anyway.
Weird thing i noticed was the number of unbalanced teams. 2 maybe 3 heroes maxed with lots of emblems. Why is a dunno, lots of emblems of a type maybe. But neglecting half a team is silly.
On emblems in this kind of level playing field. Take them away please SG.
It was great to play with everyone equal. Moreso in the first few days. Troops and skills are all the extra skills needed. Something achievable after a couple of months or years. For that matter why not give us all 1 troop and leave it there.
Put everyone in with the sane chances balanced by team selection and hero abilities. It’s fun and without the panic i can now try and build some organised 1 + 2 star teams.
Not using emblems just ti see if i can pull a high tier win. If facing a team of heroes with 40 emblems apiece am i playing the heroes or their talents?
Still it is a good step forward if only because of the FUN factor. Which is supposed to be what gaming is about, isn’t it?

Perfectly good post @hammerstrong, but this topic is about season 2 farming.

@Kerridoc could you move the above post to the Tourney thread?

I enjoyed this tournament. It caught me completely unprepared, and I scrambled to level up a rainbow of 2* heroes, then threw emblems on them up to +7 (so I can get them all back when I want them, just spending 2 gems per hero).

I went 24-1 on offense, had an A performance on defense every day, and ended up solidly in top 1%. I’ve never seen so many troop tokens in a single award:

All that said, I think that (aside from the few players who had seriously prepped for a 2* tournament) high-resource players had an edge in this tournament. I have gobs of food, 4 training camps, and a backlog of feeders, so leveling the ten 2* heroes I have wasn’t a great strain or distraction from basic bench-building.

Touch luck. Top 1% cut off just past rank 9000. (Was top 1% after using hits yesterday and lost it before going to sleep) Less participation in this tourney than usual.

I like the 2* raid tournament even though I got surprised. Stop using my 2* for improving my 5* heroes and raise a new deck. At the end I have a 1600 2* team and I hope that they get a chance to fight again. And if they really started 1* tournaments I build up a 1* team. I find it a good idea that feeder a getting a chance to fight.