I love to war and raid with a red mono team, they slice through most telly defence. My team is currently Boldtusk (c), GM +20, Khagan +19, Tyr+6, Anzog+3. My weakness here is Boldtusk which can’t stay alive in the league I am playing. His healing was always an asset but now he is taken out to soon. I won’t give him emblems.

I have a set of rings and can give them to Khagan nr. 2, Red Hood, Elena or Azlar. None seems be really a game changer that can replace Boldtusk om the team. Any suggestions? Do I give the rings to any of the four or wait for a better red to appear some day?

I don’t think any of the other 5’s you listed will improve your current team.

BT is worth a few emblems if he does the job, no?

He is a staple for my red stacks , i think hes sturdy enough to play in the 5* league

I have Tyr and Fenrir competing for fighter emblems. So Boldtusk won’t get emblems soon. I considered Red Hood for a bit of healing but I don’t know how good she really is as healer. I tried her at 3:70 and am still bit hesitant.

Red Hood to improve your teams survivability and shield you from mana reductions, or Azlar for a harder hit than Khagan.

I like both with Wilbur personally. RH so her foxes don’t die too quickly and the heal is more impactful, Azlar cuz he’s squishy and cuz his hit is stronk with Wilbur.

Boldtusk+cb+18 nodes has beastly stats. Are you sure you don’t want to emblem him? He essentially becomes a 5* at that point (over 900 def + 1400 HP I believe), I think @Epigenetic was the one who made a good case for why he’s the most deserving 4* for fighter emblems (as far as raiding goes anyway).

Here’s my Boldtusk. I gave him emblems and have not regretted it at all. He’s one of the few 4* heros I didn’t strip emblems from. His stats are decent. He’s basically 5* hero in a 4* body. 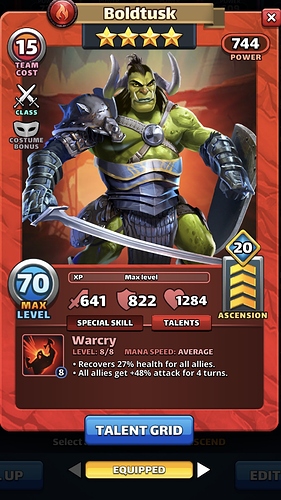 Thanks for the input, I was always a big fan of Boldtusk, that is why he is still playing with the big 5* heroes. I agree that he is probably the best 4* fighter. I aim to keep my cups above 2700 at the moment and in that league Boldtusk is suffering a bit without any emblems. My question is precisely for the reason that I don’t know if any of the other 5* heroes I have will be able to replace Boldtusk, or do a better job, if they are fully ascended.

I will not soon replace Khagan. With a full defense path, fast mana troops and added defence from Anzog’s elemental link he survives to turn into ia beast that speeds up all your red attacks. With GM and Tyr on his sides he makes a huge difference in my red stack.

Yes, Boldtusk is impressive. But when you face a Def team all over 840 in power the 744 struggles to stay up. If I had the emblems to put on Boldtusk I would have done so… and it is still an option to consider. So I must evaluate my 5* heros fully ascended against a Boldtusk fully ascended in considering where and when to use my rings. Thanks for the input.

So the way I understand, Boldtusk dies too soon and you need a hero to replace him with that is more reliable.

So in that case, that rules out Elena, Azlar and Khagan 2. All too squishy, not much of a difference between Boldtusk+cb.

The only option then is Red Hood.

For what it’s worth, I use her with just the first emblem node enabled for the pierce chance. Her fox minions are nice meatshields and combo’d with Anzogh they might be able to keep your team healthy together. Might be, because her survivability will be similar to Boldtusk+cb. You gain HoT and a mana reduction shield, but lose on the attack buff.

So I think there’s realistically two options then – emblem BT or go with Red Hood to help your survivability.

Also, @JAWS1 Boldtusk isn’t even leveled with costume, so his stats will actually get even better than that card shown (also mine has higher defense at 858 before costume, but a bit less HP and attack so we differed in route somewhere).

I went HP > Defense > Attack, and took the Healing Increase node on my BT (with maxed costume)

I love costumes, but BT in his OG form is usually the better bet.

Boldtusk needs about 5 nodes to compete in high diamond.

Tyr won’t need emblems at all.
He’s not very good except for his annoyingly many revives, but he isn’t hard to beat.

Spread your fighter emblems to Fen and Boldie.

I put mine with costume but nobody seemed to see it

Only left one def path to take.

I tried to mix some attack with def and hp, this way hes still sturdy and contribute a little bit more with tile damage

Don’t adjust Boldies path. Boldie is way better as orc than as cook. Costume stats welcome for sure.

Mine is +18, he was the first fighter to get emblems and wouldn’t strip him for nothing. He rarely gets killed without casting in high diamond fights. Costume is for bonuses only. Never gets used. The ork is mightier than the cook, by far.

Thanks, you are making some good points. It seems at this stage I must give the rings to red hood and make effort to emblem up Boldtusk again.

why? at emblem node you can give her mana +2% and with mana troop 17 she is semi fast
also she rocks in autofarm harder stages

p.s. i am not maxing slow s1; maybe elena/azlar if i get costume

did justice and quintus in the past cause of no choices; regret them both

Thanks, I am leaning at the moment to go with Red Hood for her faster speed. I don’t have any maxed 5* contenders for Ranger emblems. If I take a def/life/attack root she might be useful. 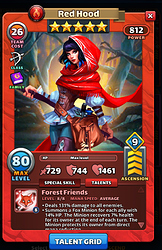 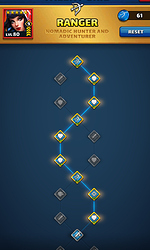 she’s a little squishy, but MN has her covered

i have marj19 mana23 and she’s vfast now; so im building a mana17 for red; till then crit17 is good for bulkyer minions

I’m assuming this is due to a mana troop thing specific to your needs? Otherwise I can’t see why the left path wouldn’t have been better

(I have Red Hood too, and am considering embleming her now that Lianna is at +10, hence why I ask)