Peppermint vs. Freya/ Seshat vs. Kageburado?

Here is a picture of my dark heroes: 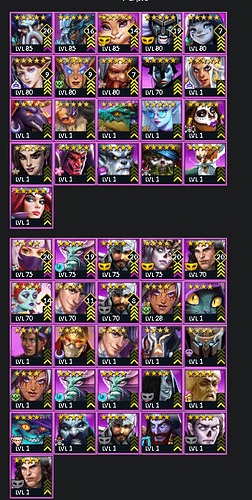 So who would you pick as an extra added value for my roster? Btw, I am also looking for a tank to replace Xnolphod…

Kageburado vs Seshat (I have emblems for both)

Boosting poll, as there were only a few answers and not a clear winner. Thank you for your opinions!

iff you want to replace Xnolphod, you can get rid of the emblem also and give it to pappermint

Few observations
If you are looking for a strong tank for war, i think you should max emb Bera and use her. She is better than most in your roster. For v Fast modes Alfri can do her job.

If you are looking for tank for raid defense, it depends on your formation.

I see you have Sergie, He can pair with Bunny and Pepper. His EDD will boost the damage of both bunny and Pepper’s hit all special. You may LB Sergie and max emblem for his survival.
And you can clean up the enemy with Pengi.
Pepper is not a good tank in its current form. He needs a buff for sure.

Thank you very much for the feedback. I was also thinking about trying Peppermint with Killhare and Sergei.

About Bera, I have not maxed emblemed her because I did not really have a lot of monk emblems. I managed to get some recently, though I was rather planning to use them on C Leonidas.

I am curious though about your opnion on:

I was making the latter point purely based on offense. For offense once you fire the 3 I mentioned it’s game over. So I don’t really bother about ailments.

For defense…
In regular formation xnol is definitely better for raid defence. But he is only as good as his allies. Xnol is powerful when he has powerful aoe flanks and wings. So if you have strong hit all or hit 3 cards he definitely takes the position. It is equally powerful in reverse.

For minion counters I don’t see any difference between bera or Freya as both are liability. I fear bera than Freya as Freya does nothing more than protect and mini bites every turn with minions. Bera also causes continuous poison damage with moderate protection. Even with cleanse, unless the attacker eats all Butterflies the damage is constant. I always use grimble to take down minion defense. But I have seen my attack melt against bera if my board goes south.

The commonly accepted usage of skadi today is to fire costume kiril for dd and then fire skadi. That can break most s3 and Xmas minions but not the recently released minion madness. I have taken down a few war def with this approach when facing Freya and bera tanks.

I love facing Killhare tanks. I let the bunny fire and then I finish the enemy team due to the ailment. I don’t bother to bring yellows too. That’s how easy she is to deal today. Teams can survive even 2 Killhare strikes today.
I see Killhare purely as offense card as a finisher now.

All of this should be considered depending on where you are in the game. I am in an alliance which floats around 90 to 150 ranking. But if you are not so high, you can make it work without much challenge.

Thank you very much for your feedback. Very clear adn useful. I am not in a high-level alliance now, but I keep getting one-shotted lately. Will emblem Bera and see how it goes