These in-game BF “deals” are pathetic. Not even better than the regular s5 offer today. I can’t believe how greedy SG is

Well, I have been saving gems for a while and decided to try my first 10 pull. (The rest of my saved gems are going to roster space and a 10 pull in Challenge Festival 2.)

Seeing everything in this thread, I knew the worst case scenario was to add 10 to my Fated Summons counter. But I have been playing a little less than one year and so I wanted a chance to build my roster depth - especially 4 stars. Here is my pull:

Somehow, I did not pull a single duplicate - and there are plenty of good pieces in there for me. From what I see, Hel is the prize - even though she is an old HotM and her stats won’t be great. Even without her in there, I would have been plenty happy

I totally agree with your comments!

Congrats to those that got Fortuna & Jove!!!

although amazing degrades the quality of the existing ones,
in other words they do a kind of

to all the rest.

To balance that they have two choices: either nerf the new ones after some months or keep up producing even more overpowered (almost like having 6* heroes).

As it seems Lord Loki will never become an outdated hero! 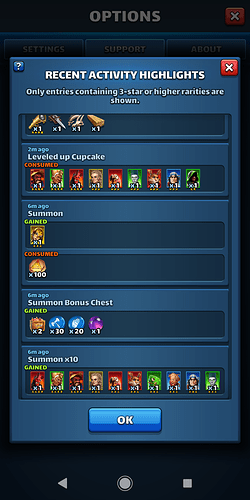 just kept the 3* i aint got

I just got Victor today. Although without his costume i dont see that much use for him. Lets see if i can max him any soon to test him.

240 pulls and not a single legendary. Not even a hotm. I didn’t expect to get Jove, but at least something.

I did two pull sessions, one I did 210 pulls got Bera. Interestingly enough I didn’t have her but no way I’ll level her without a costume as bad as I need her against minions. So pretty bad, not as bad as you and I’m sorry but pretty bad. Then I had some gems lying around so I did 150 more. Every 30 pull had at least 1 legendary. It’s streaky and you hit a bad streak. Sorry, really sucks.

Thank you. I just have terrible luck at event summons. In Dunes I seem to get a legendary every 10 pulls and with Atlantis I was the same way. My hotm have seemed to fall off a cliff since Soul Exchange started. I use to get 10 a month. Now I get one or two.

I had 12 single pulls in Dunes and got Ahmose and Tetishari from two of them. Last Dunes I got Khufu from a free pull. It’s just these event pulls that I get no luck at all. I would rather have the luck in the event pulls than the season ones.

So funny because I’m the EXACT same way with my pulls.

When ma’at was in the portal not featured, got her my first single coin pull. Then same with tetisheri, my first ten pull I got him not featured. Then this dunes I got Ahmose in 16 coins. Atlantis, Valhalla and underwild the same. Those portals literally handed me every hero I wanted.

The events though, absolutely brutal at times. More often than not I do poorly.

Did a 30x BF when I scored a 5* chest for the first slot of a regular GB. Reckoned my RNG should be a tad higher.

Guess it was cos I did get a 5* but a dupe (seriously massive dupe). Nothing interesting except for Steropes, who’s new. Will be on back burner for levelling.

Last BF, I went past >100 to get Noor. Zero excitement there.

That should be the end of my dipping into the murky depths of the BF portal. Unless I experience “high RNG” in my loot or MV before the portal closes.

Same here, I tell myself not to dip funds into BF summons cause it’s only dupes after dupes, but I can’t help myself lol. I get tempted cause I see people pulling heroes like Charon or Waterpipe and I’m naive thinking that could be me

I got a second Jove today.
As soon as they are both maxed i will try them as flanks to a Obakan 2nd Costume or Ludwig-Tank.

10 pulls on the first day gave me Frida. I didn’t have her and she is my first 5* for blue defense down, so a nice pick for my blue titan team. And then today, after maybe a total of 40 pulls since the beginning of the event, Charon joined my roster!

Did my 10 pull. Franz and HOTM salvaged the pulls. Chest loot was trash 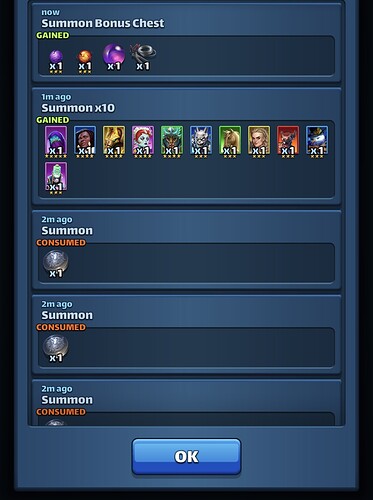 I took a year off around September last year, so I was missing quite a few good event 4* (like Mielikki and Kalo). Decided to try my hand at this portal and man did I have an incredible haul.

Did about 250-ish pulls, and here are some of the highlights:

And a whole bunch more of course, but these were the heroes I REALLY wanted so I’m happy I got all of them.

I’m starting to think it actually might be way more economical to just save all my gems for this portal once every year. Because without S1 heroes in the mix, you’re guaranteed to get something different. I guess the only major downside is you’re basically “a year behind”, but this is definitely the most economical way in terms of long-term spending/playing.

Did 40 pulls, which is 30 pulls more I wanted to do. In the end I did get very welcome addition to my roster: 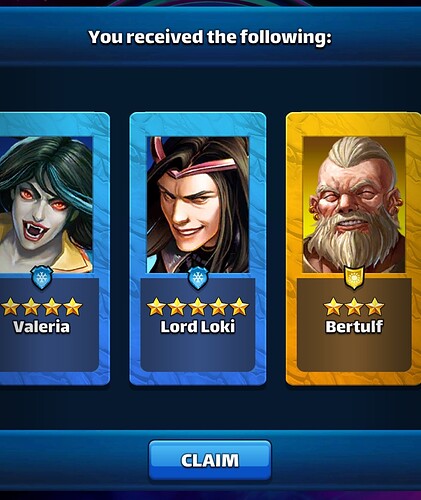 Now I am glad I didn’t take him when he was available in SE, because I was considering him but lack of telescopes and the fact I pulled Tethys then persuaded me to take LotL instead. Now I got Loki and have mats. Everything falls in place

I’m starting to think it actually might be way more economical to just save all my gems for this portal once every year.

Twice every year, the Solstice summon works exactly like the Black Friday summon

I do the same since they announced the Solstice summon. I save my gems all year long and I spend it only on these two summon events. As a VC2P, I get mostly new heroes

I use that rat fella in the 3 star raids, he actually does pretty well.

That’s good to know, but I’m guessing I probably didn’t need a second one — the only non-duplicate in that summon was Carol who… might be okay in a specific range of Tower levels (high enough level to decrease effect duration to make her bomb go off fast, not so high level that a 4* hero has the life expectancy of a chocolate kettle on a hot stove) but that is a pretty narrow use case