Hi everyone,
so for context, I have 3 sets of mana troops at 29+
I’m debating whether maxing a set of magic troops would make any sense for me…
My take on them is they’re great for newer players wanting to reach those break points faster and at minimal cost.
I don’t have that problem, so the only interest for me would be to charge my defense faster. But I have no clue whether the extra 5% mana actually makes a difference as to how fast a defensive hero will fire…
Has anybody done any testing about that ? Are there any serious research / conclusions available on this topic ?
In which case, thanks for pointing them out to me

In the first post there are extensive calculation made by the players. Maybe you find your answer. [Master Discussion] - Magic Troops

could somebody give me a quick answer to the question : do magic troops make a significant (if any) difference in defense ?

Magic troops have the same braking points as mana troops with advantage in Mana and Heal, while they are weaker in attack and def. The Max are:

So for healer and speed Magic troops ar much better

In short : Yes for average or slow heroes, you can shave off two tiles with a lvl29 msna troop and additional bonus llike a xcostume bonus and/or a 4% mana talent node.
You need 20% mana generation to fire a slow hero (12tiles) after only ten tiles, that is done using a lvl29 magic troop. To fire sn average (10 tiles) hero after 8 tiles you need additional 30% mana generation. A lvl29 magic troop and any full S1 or Challenge event costume bonus will do, with seasonal costumes its 1% costume bonus and you need a Sorcerer, Monk or Druids 4% mana talent node.

I think for the right heroes its a huge difference. The trade off is less attack bonus.

ok thanks, do we know after how many tiles a tank (let’s say xnolphod) will fire if he’s equipped with magic troops in comparison to mana ?
I’m talking defensively

That depends on the number of turns.

Lazy or not, you’ve got to put some effort in. The search bar is your friend.

Think of all the threads that would have been started if everyone wanted to be spoon fed info.

I’m sure the volunteer mods would thank you.

It’s been worked out before

So there are a few errors in your example:
Xnolpod is average, meaning he charges in 10 tiles, not 8.
The managain per turn seems to be .8, and does get boosted by manabonus.
The managain per tile is .5 and decreases with more hits during the same turn.

Still, the mana-bonus does apply to this numbers, so the defense heroes will charge a bit faster, but given they are hit with multiple tiles and get that fixed boost per turn, it’s very situational when a larger boost will make a difference and charge a turn sooner.

So let’s take the following scenario: tank xnol gets hit with 3 tiles each turn for 3 turns.

thanks WaVe for sharing the maths, exactly what I expected

In the meantime I learned that magic troops would make a difference in attack for ninjas : charge one reached in 4 tiles and charge 3 reached in 12 tiles !
All in all, I’ll go ahead and level a set for offense.
Also, you never know what kind of new mana bonus could come down the line, making it so that magic troops enable reaching further break points

I found this from youtube. So I think yes, absolutely. 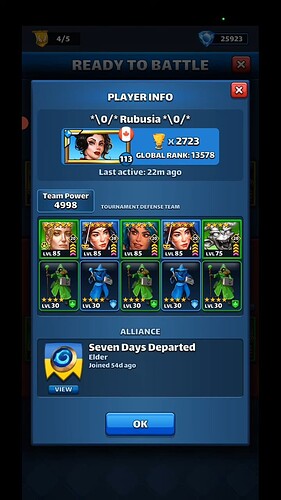