anyone putting emblems on him? if yes, pls share the path? i just maxed him out

Personally, I would take the attack path as much as possible. Cris has a high attack stat already and the goal is to hit all for 400% damage, or snipe someone for 470%. Make it hurt more. His health and shield are already pretty good, but when given the option of going either shield or health, I’d go attack/shield.

I would also go attack path, although I think he could make a powerful front in double defenses as his second charge is deadly when fired early in game. In that scenario, probably sacrificing a bit of an attack power for survivability could be beneficial… Although there is one downside to it - and that is the AI won’t always wait for the 2nd charge. In fact, at the moment, it’s difficult to expect what’s AI behavior for this magic charge. With Ninjas they usually wait unless they drop in HP significantly. Will that be the case here… who knows.

That was probably a very reasonable change and it definitely makes him more balanced. I was a little bummed when I pulled him as Milena’s second charge offers almost the same damage with no conditions, and with the added bonus of dispell which is a very desirable skill (especially for blue). I do know that not all heroes can be created equally though, and Cristobal’s first charge could be considered more beneficially offensively than Milena’s first charge.

I’m excited to level my Cristobal and my biggest dilemma is who deserves the emblems more, Xnolphod or Cris (there are worse dilemmas to have 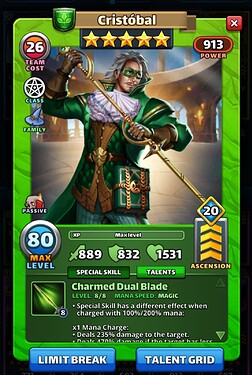 Have you hit much for the 400% to all? Curious what the damage looks like. I don’t have frigg, but Almur is possibly a good ally to bring along as he will give the EDD without doing much damage.

I have the exact same problem and figured the hitter will get more bang for the buck in terms of emblems. I would love to have Xnol fully emblemed for survivability but figure he can get along at 4/80 with no emblems for a while.

Like SG developers say, its a mellow power creep

Cobalts power is that he bypasses all defenses. Milena just isn’t on that level. Just bring a Mitsuko and she’s ignorable.

Milena isn’t a defense hero anyways and you rarely see Mitsuko on defense. On offense Milena is better than Cobalt in terms of overall versatility and damage.

And cobalt I think still has higher attack stats. Although it’s about a 20 point difference, the cynic in me wants to say this matters a lot

Also main problem with Cobalt is his 100% bypass everything on 3x charge. Milena has counters such as Mits, Sif, defense increase etc. With Cobalt you have taunters and that’s pretty much it. But 3x Cobalt takes longer to get than Tier 2 Milena, so there’s that.

Exactly. Cobalt’s 3x takes longer so thats the “counter”. Just kill him before he gets to 3x. But honestly, we shouldn’t be comparing them on defense b/c they are offense oriented heroes imo. The charge mechanic makes them inconsistent on def.

I agree with you for most part, but I think mages will see alot of play on defense too,
since 2 charges offers alot less ‘‘safe’’ time while at the same time be more unpredictable…

Lets not also forget, that in comparison with Ninjas, these wizards passive skill on second charge is powerfull ability on its own. 30% to all others or in case of Milena, 25% mana to all? Her being on left flank can make heroes on right side go off, where you thought you still have a turn or two time left…

She also brings dispell and cleanse in one hero, so its extremely efficient to field her in defense for just one roster spot !

I agree with you for most part, but I think mages will see alot of play on defense too,
since 2 charges offers alot less ‘‘safe’’ time while at the same time be more unpredictable…

That’s definitely possible. We’ll see. I still think they won’t be the top choice on defense overall but could be someone’s best possible choice.

I just pulled him, and he now joins Nadezhda.

And I just figured out what the heck his 2x mana charge meant derp. He’ll hit 470% to whatever hero has < 50%HP. I thought he’ll hit that hard to all enemies if you lock in to the one with low HP. He should be fun to play with.

Actually, I try to charge him 2 times as often as I can.

If there is an annoying ennemy to get rid of (M North / C Kadilen…) I will use the 1st charge. I really like him, he is versatile.

but I still have Frigg in my war defense…

thanks man, appreciate it

erm why is he at wing & not flank? issit better that way?

What difference does it make in offense?

Makes me want to get a Cristobal, maybe next time.

I think he’s cool as others have said, very versatile. For me it’s gonna be about trying to get the higher hits, but shouldn’t be too difficult in a battle. Here’s my full review. Thank you!

Just got him on one last single pull that I had gems for (after doing about 45 pulls in total during the event). He’s maybe the least interesting legendary out of this event for me, as I dont care too much about snipers etc. But defo will give him the tonics, and would love to give him emblems too, but I just have so many sorcerer heroes and I’m working on Ursena at the moment, she’s at 11. Gonna have to see how I like to use him. I do love costume Azlar though, so I guess he will be the green variant of him and also a quick sniper.

I mean he is, but if you let the young boy become a man, he will be a sniper like Yondu and that damn arrow of his. Let him go to his 2x charge, and he’ll turn the room upside down.