I’m looking for advice on my defense team and maybe suggestions on which heroes and formations I could try.

I usually stay around 2650-2750 cups without doing so much, rarely gets below 2600 but it happens. But now I’ve had the same def team for quite a while so I would like to change (hopefully for the better).

Hulda is a really strong one and we all know that LotL can be a pain (in the… somewhere) even tho she is slow. But since we also know dodger are annoying I do consider cFreya and as well maybe Rhys to speed things up. Or maybe wait until Mr Pengi is maxed and put him with some minion makers.

Here’s a pic of my def team and below a link with my 5* rooster.

Please look through my rooster and come with some advice of changes of heroes and formations, thank you very much guys 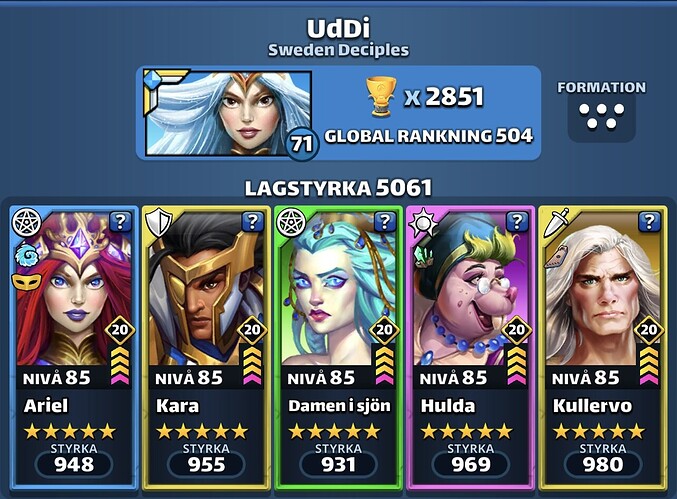 Do you have a red to make a rainbow? Looking at that I’d make sure I brought C Sabina for the taunt and Grimble for the minions…both of those heroes many players have. Very passive too, Kullvero is the only hitter. That said, you’d be annoying to fight. I’d see at least a 4 minute battle.

Thanks for your input and yes it is very passive and definitely have multiple “Achilles heels” and that’s why it’s a bit surprising that it’s a pretty successful def team.

For my red rooster my maxed and emblemed are El duque, Elizabeth, Khufu and cAzlar.

I took a print screen of my rooster and put it in the op.

Khufu, Tethys, El Naddaha, Kullervo and Hulda could make your team deadlier in my opinion. As it is, your team is like a big tiles dump.

In what formation? Reverse V?

I personally don’t fear El naddaha in defense since she is pretty fragile even tho I always use her in offense. But that team you suggest seems pretty dangerous

Reverse V is always a very challenging formation. Give it a go and let us know the progress.

You should. I think she is a terrifying hero : hits hard, fast, punishes buffs attempts, and deadly passives. She’s more frightning than Quenell in my opinion.

I’ll try it out and see how it goes. But I take it as Hulda is a better alternative than cFreya?

Maybe I try something else when Pengi is maxed.

The optimal def teams is naturally changing over time with new heroes added to the meta so I am still open for suggestions everyone.