5 red heroes and not sure who to give the mats to…help! 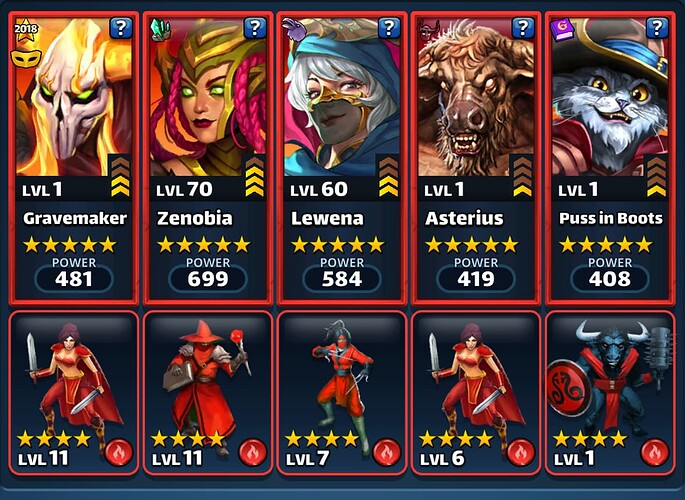 I put them in order of which ones I personally want to do first.

Gravemaker is just cool to me. I’d say out of all the heroes he may be the least impactful. Ive never really feared him on defense. But I just think he’s going to be fun.

Zenobia is strong and is very useful especially for titans. But she’s just not interesting to me. I have jabberwock costume and I feel possibly leveling her would be a bit redundant.

Lewena is reletively strong with a decent special skill, I’m just not sure if she’s worth leveling. If anyone has used her I’d love some feedback.

Asterius and puss in boots I really like as well and for sure asterius will be Levelled at some point. I would have no issues power leveling him though if someone made a case for why he’s be the best choice of the 5.

I could also just wait a bit, no harm in that. I do plan to pull pretty hard for clash of knights and season 5 which is one of the reasons I’m hesitant to just pull the trigger. So I’m curious in my situation what you would do. Really appreciate you reading this!

My gut is saying just pull the trigger on gravemaker

In my honest opinion, out of those, I would focus on Gravemaker and costume.
Whichever hero you choose
Good luck

If you don’t know what it means to block 5 enemies for 6 turns from a single shot from your hero and also deal 260% damage to all enemies all at the same time.
One of two and I say it with all due respect to you and to those who voted… or know very little about this game, very little know how to read.

Costume gravemaker is great for fast & heavy DoT, but remember DoT can be blocked / cleansed. Also won’t stack with other burners like Jean-Francois, Colen etc. His element link is nice in a fire stack & he has good stats to keep him alive too. As he’s a costume then he can take more curses in the towers. mana node + lvl 11 troop as you have = 6 tiles / 3 ghosted.
Going to admit I don’t know the others so well.

The issue is not my ability to read, quite the contrary. With all the new heroes coming out in season 5, they make her look weak. Which is kind of ridiculous. Blocking talent activity is pretty dope. But I don’t have her levelled enough to use her to decide for myself weather the special is as useful as it may sound. Family bonus is great and I have other ravens. But again, season 5 family bonuses are just bonkers. So I think if I were no longer pulling heroes, there would be a much stronger case for her.

But it’s hard for me to make the call. Which also is mind blowing. The clash of knights heroes are sooooo strong and I’m sitting here waiting because there will be even stronger heroes soon. lol. Crazy.

I have all these barring Zenobia so I can’t speak for her, but for me it’s Asterius all day, his D down will stack with other D down hero’s which makes the targets sitting ducks, and he hits like a damn train!

It also depends on what emblems you have, if you have enough to take any to +20 that probably would sway thinking… Good luck with whoever you do.

It’s nothing personal against you or against anyone understand me, it’s just a way of speaking

@Sapu No, I didn’t take it personal. You don’t know my roster, so this question is really difficult for anyone to answer. These heroes don’t live in a vacuum, they interact highly with each other. So I wanted to know, specifically with her, who has used her and how did she fare in raids/wars.

I have octros, so to have another hit all in red like Leawena, seems redundant. But I may be missing something and I’d rather not max her to find out she isn’t a good fit for me. I mean I could always use her for war worst case scenario, I’m just so back logged with heroes to ascend I have no idea where to begin and it makes my resources seem even more precious.

Anyway, shocked that asterius is in the top spot. I do see him occasionally in the top 100 defenses. So maybe it shouldn’t have been as much of a surprise. This poll actually made things harder for me hahaha.

@Marie1 I have fought against her twice. I cannot remember the team synergy but she did hit really hard. No lie, I even made a comment In a thread saying that she was underrated a well. So I totally agree which is why I started working on her. Then I pulled ruby and that was an easy choice lol. But I will have rings this month and I’m just not sure who to move on. Thank you for posting the card it really helps. I do plan to do just an insane amount of pulls for clash of knights so having the family synergy is another reason I’m considering her.

Off topic, I’m replying to people posts but it’s not showing up in my post. Weird. 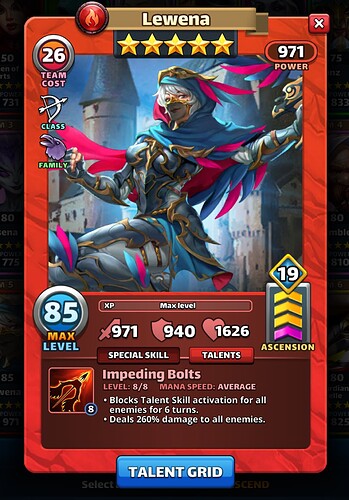 I love her. She’s a silent killer. You don’t see all the good work she does blocking talents, you just know she’s made it much easier for you to win.

I love my costum GM. I have at least 10 red 5* maxed and mostly newer heros. I have used GM since about a week after 1st released. I always seem to come back to him in raids. I want to limit break him but I don’t think I will. Because max out with limit break still leaves his basic stats below most heros from season 3 and beyond. Possible on some season 2 as well. He is a great hero but I am afraid if they do not give him a bigger boost, season 5 and event heros will take him over with ease. I have decided to just set on all mats until we get a feel for season 5.

Season 5 is why I made the thread essentially. Leveling gravemaker is an emotional choice, I just think he’s cool. But I know that given the rarity of ascension materials, that isn’t the best choice. I do plan on pulling hard from season 5. Maybe I will wait. Good luck on your pulls by the way.

That said, I appreciate everyone’s comments and votes. I am shocked at the results. I knew asterius was a great hero, but no one talks about him at all. So I am going to focus on getting him to 3/70 and then see what comes of the season 5 portal.

I voted for Costume Gravemaker due to his speed. Quite often speed can make a lot of difference.

Asterius is a great choice and as far as I’ve read on the forum, especially after his latest buff, people say he’s a monster both damage wise and with the extra defense down.

Lewena is a very strong hit all and her talent block I think it’s underrated.

My lowest priority would be Zenobia. Not because she is not good, but I see her as a titan specialist and I think you can manage with her well enough at 3.70

Thanks to everyone that voted and commented. I’m very shocked by the results but I guess I shouldn’t be. Leveling asterius now!