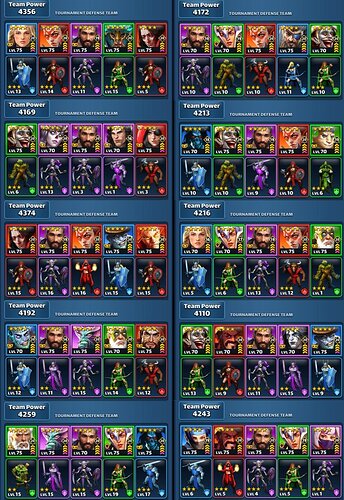 First thoughts, don’t have a lot of purple 4*’s and no tank for sure 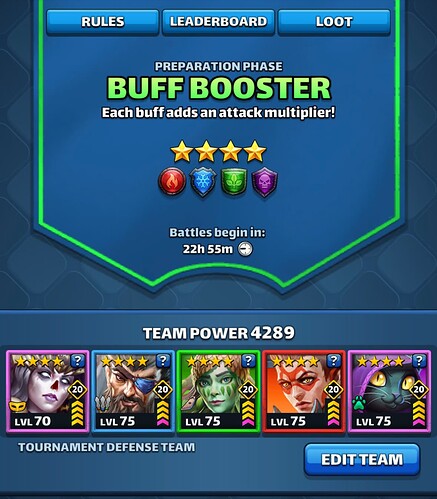 I’d like to use Mielikki or Ferrant, but I think after seeing the top 10 defenses from March, I’m going to go with this group as my first draft.

This is probably the crew I will go with. Not sure about the double HoT, but it’s hard to ignore it as a buff.

I would love to get cMel in here somehow with his wizard superior talent, but I don’t know how to make that work. 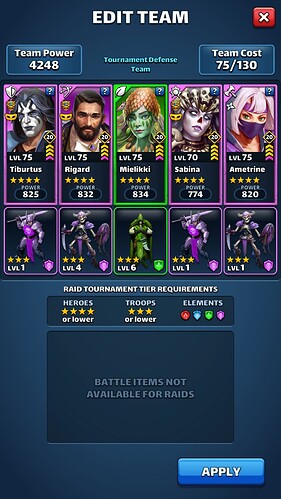 First draft here, got some purple options but most are without emblems or lb so pretty weak. Think the ripostle and heal from Azmia & Junaid could work pretty nice here

I will go with this defense. I think Mielikki is still better tank than the passive C Rigard 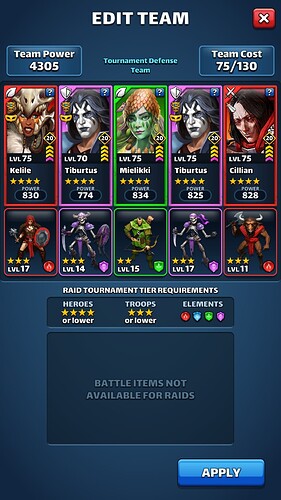 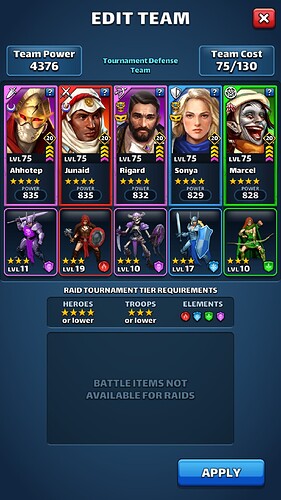 C-tibs became a very valid tank due to super talent 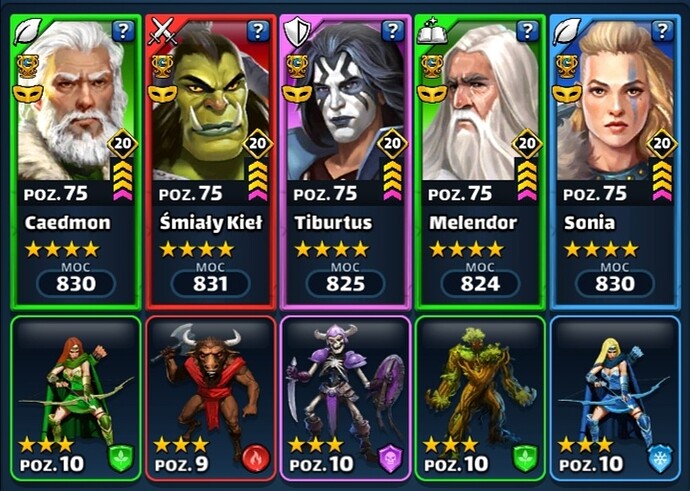 Double HoT can be a little hedged by minions IMO.
…but don’t you worry about being too passive? Only wings can make damage

Great team (I would like to have second Tib or Cillian), but I really don’t feel this tank… It may be your “weak point” (cGormek with his “superior” dispel is allowed)

Great team (I would like to have second Tib or Cillian), but I really don’t feel this tank… It may be your “weak point”.

C Rigard is good. I have him with 75+20 as well but I think Mielikki’s minion is better than the heal over turn. The minion can stack up but the heal over turn can’t. C Rigard can be counter with normal S1 heroes like Sonya and Caedmon but Mielikki’s minion need non S1 heroes to counter which is harder to counter. However, this tournament is no yellow, C Rigard will be tougher. Overall, I don’t know who is really better. So, I want to try Mielikki tank and see if she work well or not

(cGormek with his “superior” dispel is allowed)

C Gormek’s talent can’t dispell Mielikki’s minion mana regen. And the only red cleanser (Shale) is weak. The red stack will have problem against ailment and Mielikki also apply undispellable -24% atk down on all red for 6 turn.

As I say before, I think more people have Sonya or Caedmon than C Gormek. I think Mielikki is better against most people. 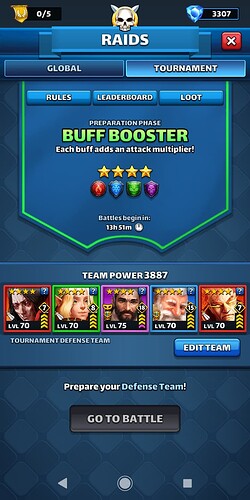 Thats a good point re Mielikki. Might go for this then. Or maybe Ptolemy could be used for his 30% instant heal and possible boosted heal. 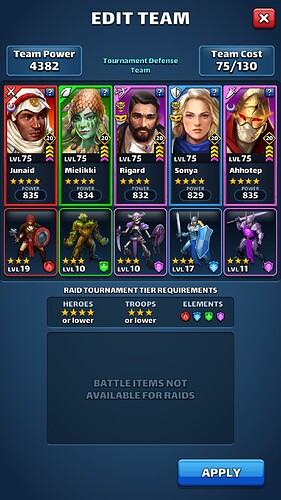 C.Gormek removes all minions immediately, so his superior talent is not really relevant here. (As you know, Mielikki’s mana-generating buffs come from her minions.)
Also, since minion remover has a skill that works on its own, I usually don’t stack red here; just have C.Gormek on the team as an off-color, Mielikki becomes a tile dump, and attack team just clears the board for C.Gormek to be charged up.

Still, using Mielikki as a tank is a nice perspective.

…but cGormek can eat all her minions. I wrote about his superior abilities, bcause thanks to them, his value in this tournament has increased significantly (more players will want to use him). Normally I wouldn’t use him as red, but against Mielikki is a great choice.
To sum up, we have a S1 hero (in strong color) who destroys minions and gives a chance for “bonus” dispel. Looks great for me

I also have cRigard but I didn’t use him (as a tank) for fear of superior talents (cMelendor, Kiril, cGormek). This is probably the end of the era of Rigard’s dominance (but he is still a good hero)

think more people have Sonya or Caedmon than C Gormek

It may be truth, otherwise the Mielikki (as a tank) wouldn’t make sense.

Thats an excellent line up.

Double HoT can be a little hedged by minions IMO.
…but don’t you worry about being too passive? Only wings can make damage

This is a good point. I’m not sure who else to bring. If C Kelile was ready she would probably make the cut.

I have my mielikki tank and I’m putting my 20 emblem costume Sonya. her superior talent making that massive minion will protect the mielikki minions.

He has indeed. 10% chance for 10% heal plus added defence