Is anyone worried Khufu will get nerfed? That’s my biggest concern and why I’m consulting you guys/gals right now. I have both phenexa and Khufu at 3/70 ready to go.

I will say I need probably 2 more healers for war so she would be great especially in red. Plus titans. Then khufu is slow but he’s just a monster. I’m wondering who I’d get more use out of. If anyone has khufu what do you think of him and how do you use him? 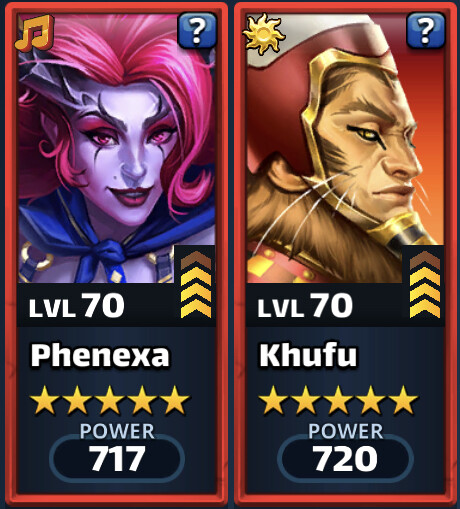 It’s hard to say if he will get nerfed, but regardless I say Phenexa! You wanted her from that portal and you got her, don’t have second thoughts and don’t look back lol. Do it, push the button

You need another healer and you can’t go wrong with her, her secondary effects are amazing!

don’t understand the question. both!

Based on the poll you were right lol!

I use Khufu in pretty much every raid with ludwig. He deals so much damage it is just ridiculous! Especially if a def down hero has fired first…usually a team wipe!

@Starkyboy87 I decided to play with him on some friendly raids at 3/70. He is hitting crazy number for being at 3/70. I think that sold me and I agree, maxed this guys gonna be insane. Gonna give it 24 hours and then decide. I have Ludwig as well and that’s who I was raiding with hah. Appreciate your post!

So tough. I was lucky and got Khufu on a single pull. I leveled him quicker than any hero I’ve ever done and he amazing to use and make my defense which was already tough even tougher. That said, I feal the nerfzilla coming inevitably. I voted Phenexa because she’s the perfect support hero and I think your roster is already pretty deep.

Either way you win!!

Concerned? No. I can’t wait for that day to arrive. Believe me, it’s coming.

I think ultimately I’m giving the rings to phenexa. She’s not getting nerfed, I just raided with her in the top 100 at 3/70 and it was fun as heck with that crit. Alright I’ll be back with her all pretty like lol!

Here ya go…thanks everyone! Ultimately I’m worried khufu will get a nerf. If he doesn’t, I’ll level him in the near future. But experience has taught me I might want to wait. 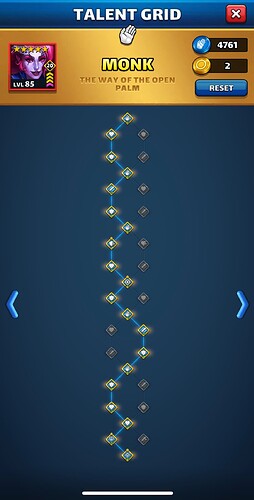 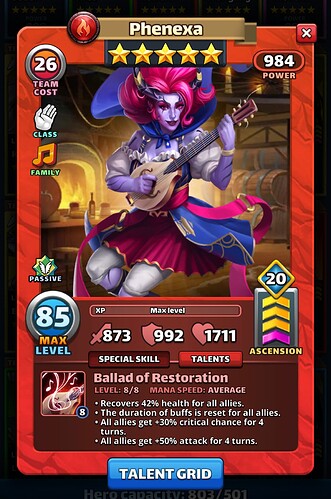 Went against a Ludwig tank flanked by quintin and khufu. They wrecked me good. I guess even a ludwig-khufu combo is certainly challenging at least.

It was a good decision and you won’t look back! Are you going to also use her for titans? Man jealous as to how many monk emblems you have

Khufu is a menace to society lol. They’ll sell a legendary ascension offer and if I’m still feeling it in a month or so I’ll level him.

I am having soooooo much fun with her. I’m on the edge of my seat waiting for the crit to hit. I only had two reds on my team, phenexa and Oceanus. With both going, single tiles were hitting for 800+. It’s so cool to see someone get smoked by crit. Only two red heroes, I was blown away. It really helps my play style. I usually go 3/1/1 or 2/2/1 so having added tile damage is extremely helpful.

I will 100% use her for titans. That was another reason I leveled her, the crit and she meshes well with Oceanus. She’s unique, I have a lot of red hitters actually, I didn’t realize it. Red is my strongest titan team color.

Happy with the decision so far, thank you @kmwlew

It really helps my play style. I usually go 3/1/1 or 2/2/1 so having added tile damage is extremely helpful.

Have you looked at what synergies you have available with the buff duration resret aspect of her special? That is really quite powerful. I use it to get near invulnerability when I extend Luigi’s special to 7 turns

Luigi is a great example, but costume Sif is pretty great with her, along with Emilio and Freya. Extended defense, counter attack and ailment immunity!