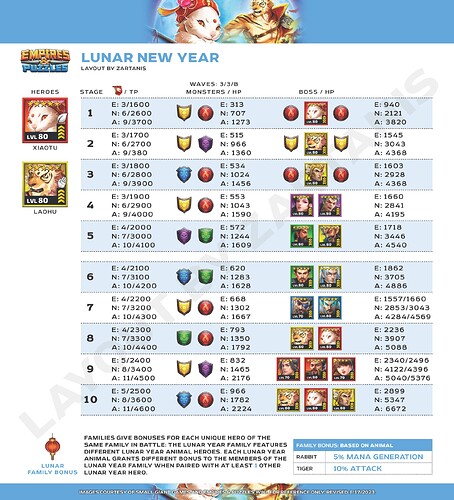 Meanwhile all 12 animals should be 5s. Don’t be hatin’ on some to make them 3s&4s. Bad enough they made my girl Wang Yuanji a lowly 4 when IRL she was an Empress Dowager ffs. I want badass 5* heroes for all 12.

and taking Ninja Tower as an example, I would not put it past SG to eventually make 3 heroes per animal, one 3* one 4* and one 5*, for a total of 36

if the game survives that long anyway. but again, look at Ninja Tower, and how many Ninjas are running around in that summon portal already

Phfew, I am glad I have a good pair of counter attack heroes. I just got hit by a 1900 attack on the last stage!

It´s the first time I´m already done with all the stages in a Seasonal Event after just a few days release though, good luck ahead to you all - hopefully we will see a couple of 3☆ and 4☆ heroes next year

@PlayForFun Here are the updated guides, fixing the bosses on stages 3 and 4. 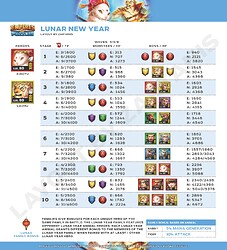 Thx, I have updated the OP with these.

Finished the event. It wasn’t particularly fun. I did like the fireworks. The damage wasn’t too punishing and the benefit is nice.
It’s better than nothing, but I’m not particularly excited for the next iteration.

I didn’t do any pulls.

Still playing it. It is not too hard. Absolutely love the music

. Really hoping that S6 will also have different song, because CF/S1/Quest music is starting to get on my nerves

. Which is why Ioved Styx Tower and it’s different song. Also, stages where one fights only boss (Ursena etc) should their own track as well. @Petri, what do you think?

I also like (and I think I will be one of few) using W3K heroes in this event because so far we never had a chance to, because raids work differently. Diaochan minions are funny. Seems Brogan has promising successor. What irks me is that Advanced difficulty has only 3 waves, usually it’s 4. I get why this time we get only 10 stages even though 20 would be manageable (we had 20 stages before, back when event lasted 2 weeks only). But reducing waves is just lazy.

Anybody else find it odd there was no EHT to be earned in advanced?. All other seasonal quests have 1ETT and 2 EHTs to earn.

And there is only 3 waves for advance. Advance always have 4 waves

Just doesnt feel right being a seasonal event. I enjoy them. 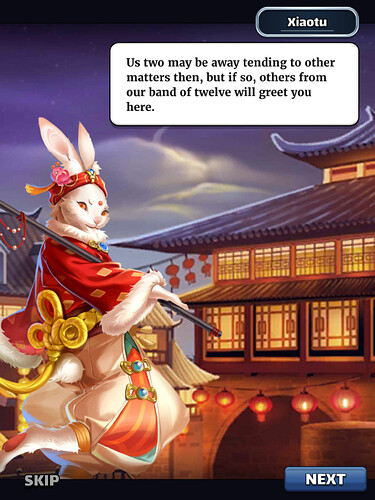 Here are my thoughts on the Lunar New Year heroes!

So, we have to wait for…6years to see the whole team?!

I am expecting only 1 hero for each year.

But I agree it would be better to have more heroes released at a time.

Makes you wonder why they don’t release at least 4 per year. At least it’s only 3 years until all animals are release then as compared to 6 years

I didn’t do any pulls.

Same. Everyone has to take a stance with their pulls if you don’t like what is being offered. Can’t let this game just become slot machines

My luckiest pulls ever… 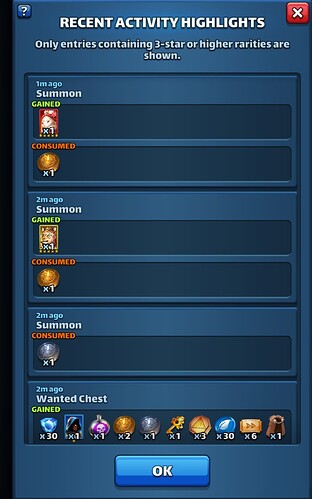 I can’t imagine better pulls than those two, wow. Congrats!

no coins were spent during this event.