Well, his effectivness basically resolves only around dmg, so you can still do alot vs him even if you dont wish to target him with ailments…

And yeah, Jove is a fast sniper to all, Anne is fast in line, Ahmose deals 400% to all and not in line… Khufu is up to current standards of great heroes

Just put him back to his original form, he was fine with that special and still quite good

Can you explain how exactly he was fine and for what he was useful out of green titans, I have him from the first portal and from beginning he was really awful, I don’t use him and now but this 8ts another story.

Two reasons why claiming "[insert hero] is fine because the next heroes in beta are worse",
is a poor argument:

The main problem is the word… “next”
By comparing to previous heroes it’s easier to gauge if the creep is one step up, or of it is leaping entire flights. When an entire flight of stairs gets leaped over and you say, "look… the next step is right there." Maybe you’re right. Maybe the next step is right there. Why would anyone be so naïve to think another portal will not soon leap up again?!?

Them that defend this form of behavior, unwittingly support much worse monsters in tomorrow’s portal. And as that story develops, the…

obsolete naturally by upcoming heroes strong than the current one

lol… "naturally"
There is nothing natural about power creeps.

As the story develops… deterioration of entire rosters magnifies!

Ridiculous. More flights will continue getting leaped over!

With Khufu…
It’s much too late.
The Average speed Damage comparison . . .
Is what you currently have now, thanks to Khufu’s allies. Which has been the case since before he was released, and remains the case even after nerfing Xnol.
It’s too late…
fast Khufu is practically required to wet whale appetites at this point.

Basically spot on. It’s too late. When double c panther flanks are both charging on turn 3 of a match and wiping your entire full health team you’ll wish they had Khufu’s instead.

When double c panther flanks are both charging on turn 3 of a match and wiping your entire full health team you’ll wish they had Khufu’s instead.

A single hero can do the work of two dupes?

And…
Those dupes received the exact comparison I mentioned above:

with the upcoming heroes and costumes. panther will be normal

Along with a slew of comments about how horrible C. Panther is on defense.

The PACE of creeps is no longer "mellow"
Meta changes so rapidly, that nerfs don’t make sense for any hero! Truly… why nerf anything? Unless it is so powerful that players stop pulling in new portals to replace it . . .

4* had better skills than Legendary over two years ago. And now they will ALSO have better stats too. No nerf will ever make any sense, ever again.
Unless…
It happens in Beta!
At which point… no whale will chase it

"There are many harsh lessons to be learned from the gambling experience, but the harshest one of all is the difference between having Fun and being Smart."

exactly. if ole Khufu were all powerful, I wouldn’t have to fire him 2-3 times to finish the other team off. of course, this is dependent on other factors in the match but still. Mine is one emblem away from being fully maxed and is completely limit broken.

If it takes you 3 shots to kill a team with KhuFU, you’re doing something very wrong.

depends on what the other team is and what they have deployed. Sometimes, if they have a lot of defensive crap up and my dispeller is dead, firing Khufu only does half damage.

I dont think people are concerned about his offense, but more his defense. As for myself on offense, if I get him off, its usually game over killing off at least 3 since I do take other heroes besides KhuFU when I raid

If you’re setting off KhuFU while they have double health, theres a good chance you wont win as it is if they have half azz heroes.

If Khufu is so OP, why when an alliance can field literally any defense they want to, is there not a single Khufu in the entire war?? 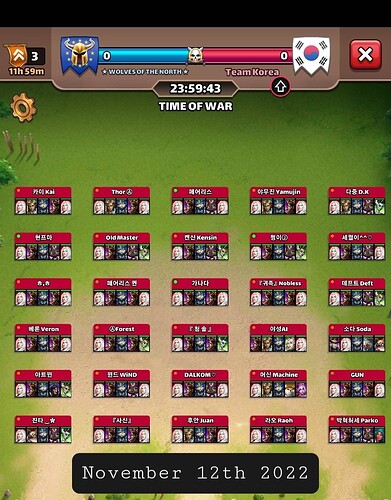 I have Khufu, Anne, Matilda, Tetisheri, and Gosek.

Please nerf all others, as I don’t own them.

I have Khufu and of course i like him.
Had him in defense also, but replaced him because of slow mana-speed.
Now i have two Joves. Imo he is much more dangerous and two of them are devastating.
So i guess we will see some “Nerf Jove!”-Threads in the near future as he has fast mana-speed and will surely be used by his owners.
And guess what…next spring we will talk about “Heinrich” or whatever, who does 600 damage to all at very fast speed.
The Game goes on, it makes no sense to complain about one single strong hero - there are much more to come.

true but sometimes its what you need to at least get them started. This morning I needed to fire him off three times because I killed the tank the first time but the flanks/wings were just wounded. then they had to go and fire off their healer. if I encounter a team with a bunch of overhealers I usually back up Khufu with Ingulf. poison and sand at the same time is kind of fun.

You’re so correct and its great you dont really need skill now. Just spend like mad and get a couple of nuke heroes. Its gonna suck when the whales start leaving because they dont want to toss a 2-3 thousand a month. Thats when this game will fold

I kind of agree, but the game won’t fold… it’ll just have to scale down and fire some staff to support a smaller player base

Every mobile game will fold eventually. I think this game is on the backside of the mountain now hence trying to squeeze everything out of the whales. I’ve been playing in a top 100 alliance the last 2 years and now have noticed that line of the haves and have nots. Its right around those top 30 alliances. I dont think that was the case a year ago

Because slow heroes’ specials rarely make up for their slow charging speed, increasingly so the higher up the level of PvP/wars.

Have you looked at the buffs that comes with 3 Holloween heroes??? That might have something to do with it

Thought it was funny

Only won because Wolfgang revived after Kufu drop the bomb

For your fight, he did 6,659 total damage to your team. Bit insane for one special don’t you think?!