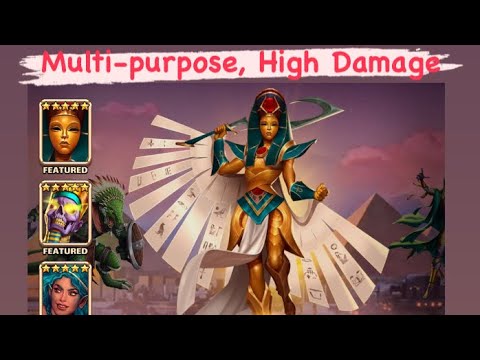 Disappointing really for slow. Other than better passives, Karnov would be better with the guaranteed 290 to all. And i find him not that impressive. Really enjoy her design, and good for titans but not sure if it is enough to push for her. El Nad is the best out of the 3 featured imo. Surprisingly I find the original heroes released are still some of the best of of the group. Overall all good but the yellows need help with her and papyros. They are not terrible, but just a litlle unbalanced. I mean there are fast heroes doing 275/280 to all.

How about giving Mindless Attack to all enemies hit?
If dark, it’s uncleansable.

Here’s what I think about Eset!

I would just suggest some changes:
-Make her average
-Target recieve 300% damage, dark recieve extra damage (50% more equal to 450%)
-Deals 200% damage to 5 randoms enemies, deals extra (50% more, equal to 300%) damage if the enemy is dark.
-the last one I would not change.
So she would be beast for titans and well balanced for using in raids and wars.

I pulled her yesterday. I’m not going to level her. 250 TO 1 AT SLOW! Then 5 random 180s. I know she does extra to dark and alters tiles, but that doesn’t justify slow mana. I was really excited to pull her until I actually looked at her card. I like what they tried to do, but she’s weak in her current state. She needs more damage to the target, and more on the randoms, or buff the mana speed

I agree, look at the other season 5 slow heroes, their damage is way higher, Eset needs a damage buff.

Agreed. She is a slightly stronger Quintus (no costume).

Have a look at Lion Roar’s video juuuuust above your comments.

This is a titan hero. Period. (Just like Miki & Jott)

If you are maxing heroes just for titans this hero is a massive boost because she is one of the tile buffers. That makes a HUGE difference on titan scores, the rest is “nice to have”. (IF you don’t yet appreciate tile buffers go search some of Jekyl & Hyde’s titan videos, he also laid it out clearly to someone that was arguing her should put El Dugue into his Green Titan team and take out Zenobia (red tile buffer)). Look it up, well worth it.

It would be great if she were better in the PvP areas but at slow she isn’t a “kill all” like some of the other recent heroes. Her best attribute, tile boost, can be triggered by mana pots vs titans but not in PvP meaning that by the time she fires in a raid, the battle will mostly have been decided and the enhanced tiles will only occasionally make the difference.

That said, she cut the line and pushed poor Thor (Fated Summon) out of the way and immediately began getting fed.

I SUPPORT her being made “Average” mana, would make her viable in PvP too and save a ton of mana pots.

agree with you, but for regular player that dont use all possible items when fighting titan she is not good even on titan as when she fill mana(as she is slow) there is many enhanced tiles left she will power up, so conclusion

not good hero if you ask me, shame as she is great graphics and lovely fast animation

Besides that she is a titan hero beacuse of Tiles (also passive for attack down is usefull vs strong titans),
She does 6x hits with extra dmg to dark titan… When cyclones are used, this IS A MASSIVE UPGRADE IN DMG to any current tile booster hero

Yeah I know that she is titan hero. An amazing titan hero and if I calculate correctly her extra damage is 40% more so stats are amazing against dark titan. Six attacks is amazing but I wish she was average. Then she would be more verstile.I do not think that she is the worst hero in S5 but definetly one that is very limited in use. Rhys is fast, Ratatoskr is average, Zenobia is average.

She is good for titan correct
but without this hero. I’m sure I can still get the top 1% on MT (for example: I don’t have Zenobia for the green titan) but I’m always in the top 1% single and total damage for the green MT. so without a hero who buffs tile damage too, we can already secure the top 1%.

for regular titans? no need for her too, I’m sure you guys can get to A+ too.
instead many top 100 alliances have a rule “limiting the total damage of the titan per member” so that all members get fair loot. so this hero will not shine too much.

She will be useful in rush war. all slow and very slow heroes will shine in rush war.
please consider this hero to be a hero with average or fast speed. She will be of more use.

This hero has a good image design!!

we don’t ask her to be buffed to be OP like other heroes. but at least buff her to be a decent hero to use / useful in various areas.

Got her last week and despite the not so positive comments like she was a titan only hero, I’ve started levelling immediately. Of course she will be part of my purple titan team. Got her 45/60 now so still not very high and tested her in the smaller raid and was really surprised of her damage output. If you can charge her she can really shine. Especially if you pair her with xnolphod or sif or even the new hotm. Get her some mana troops to fill her mana bar as fast as possible and she will be a force to reckon with. Mark my words. Nuff said

Do you think you can let me borrow yours to test? I wish that could be an option lol.

If you can charge her she can really shine.

If you have enough tiles to charge a slow hero…