Sorry for being off topic.

When is SG going to fix the in game clock and battery?

When is SG going to fix the in game clock and battery?

This is my last information on this:

Thank you for the report. We are investigating this issue here and try to get it fixed as soon as possible.

Only @Petri can tell when it will be fixed.

Any chance they would do this for seasonal costumes as well?

I do not know.
We will see if they will include it in the release notes or not.

Cross your fingers they’ll fix it.

We have just received the Beta Schedule for V54.

The first Beta will arrive in 2 weeks from today.

It would not surprise me if The Wizard of Oz legendarium is being considered for Season 6. There are lots of books and characters galore that could be adapted much like the Grimm fairy tales (Grimforest), Alice in Wonderland (Wonderland) and the Legends of Avalon and Kalevala that they have already done. It would sure make it easier to modify already existing characters and storylines than have to create all new content and, being in the public domain, be easily obtainable and recognizable. There are many characters that have barely been in any movies like Professor H.M. Wogglebug, T.E., The Gump, Jack Pumpkinhead, Ozma, Tik-Tok, Unc Nunkie, Shaggy Man, King Rinkitink and The Glass Cat, to name a few. Would love to see these interpreted a different way than just for children’s stories.

It’s also highly likely WOO is season 6, the worldbuilding is already there like the various lands, the yellow brick road, munchkin land etc.

Bad news for those who waited for the costume bonus adjustments for HotM, S2 and S3 costumes:

Here is their answer. 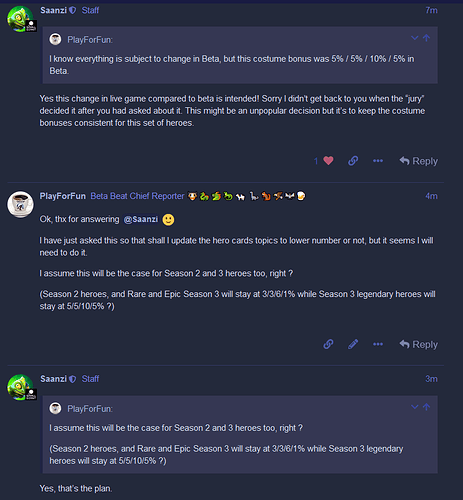 So no change will happen on them

this is absolutely ridiculous and embarrassing. take a look at the new heroes now with crazier status and skills.

Thanks for the update. Sad they aren’t keeping s2 costumes consistent with s1 and s3.

Thank you for pushing through with this topic.

It’s sad that there are inconsistencies.

Zynga/SGG probably have some marketing strategy lined up for S3 heroes. There are more 5* heroes in S3 and all the popular (more marketable) ones will be togged out with a 5% mana CB, that drives up their saleability straight away.

I have unofficially taken up the mantle of hero card wiki updater and was wondering if you had any pull with the developers to get a leveled preview card of Myztero and Enigmo I can post there. Any help would be appreciated, thanks.

You can see images / stats in these topics:

V54 could possibly give us a sneak peek at Season 6

I think it is highly unlikely.

Season 5 heroes have arrived to Beta in this year’s January.

I am not expecting Season 6 in Beta until February or March in 2023.

Season IV has arrived to Beta in 2020 December.

So my best guess is February as they are seem to be showing the heroes in Beta 1 month later than before.