He’s far from useless (but then so is Grimble).

Mok has a few significant upsides, one definite negative and one debatable negative.

His AoE damage is significant - 250% at average mana is very very high.
Extra damage against holy can also be significant.

His stats are fairly well balanced - he’s beefy enough that you’ll normally get him to fire (average mana helps here too) but punchy enough to do real damage… This contrasts with Grimble (who is beefy but is ineffective unless minions are on the field) and Quintus (who hits like a train but is just too fragile to fire reliably at slow).

The damage to allies is a mixed bag…
It’s easy to assume it’s a 100% negative but it can be made a non-issue in a mono or it can be turned to your advantage.
Pair up with a beserker like BK or Khiona plus Wilbur and he raises the attacking power of 3-5 of your team - no other hero can do this.
This isn’t necessary in raiding, but it makes beserk more potent in map/event play.

He’s not good on defence generally.
He’s excellent in attack if you build your teams right for him.

It’s easy to look at him and think he’s just a slightly poorer version on Ursena - same average speed, similar AoE output, extra damage against holy but without the reflect and with minor damage to allies…
There are two things to say to this:

Ultimately, he’s only a poor man’s Ursena because she’s beastly on defence and he isn’t - they’re both potent attackers.

Don’t write the fish off, he’s a monster!

Wilbur and Aegir allows him to hit dark enemies, which is a plus here. Lot’s of Aegirs these days…

But overall a very accurate assessment of him. He is a fun hero to use.

Absolutely yes, but even with Wilbur the attack on dark hero’s doesn’t land - spirit link just spreads 4 hits across the 5 defenders (but then one of those is against holy and therefore boosted, if you’re up against a rainbow defence).

I agree - Mok has significantly enhanced my enjoyment and I’ve got great performance out of him (as mentioned above if you have Wilbur and BK, which I do, he’s a boon!)

Significantly poorer on defence. No question.

Different on attack - in some ways more effective (almost double the SS power Vs half-health enemies; synergies with beserk heros) and in some ways less (no holy reflect, SS doesn’t hit dark).

I’d give him a slight edge in attack. She has a huge advantage on defence.

Lots of people slam him without even playing with him… He’s a long way from the joke he’s portrayed as, he’s an excellent attacking hero.

But by all means if people want to demand a buff for him, I’ll enjoy him becoming seriously OP…

He’s definitely in the discussion of my next darks. It’ll be a toss up between him, urs#2, and grimble

I have recently pulled Mok-ar, and I know I much rather would have pulled someone else, but something about him makes me think he’s actually decent in some roles.

I imagine him flanking a purple tank to punish yellows stacks for example.

Does anyone have any experience with Mok? I personally believe he might be under-rated and actually quite good with his high damage.

Or is he really that bad? I’d hate wasting tabbards.

Mok really is that bad, although could be a trap for new players stacking yellow.

Tabbards are hard to come by, so I’d save them for any other purple.

Only usable on offense as a part of a dark stack team. Never on defense and less effective than you might think vs holy titans. While it’s true that the best heroes are the ones you have, there are definitely better options than the shark.

I saw him couple of times in defence and went mono dark… He did nothing and I could focus on the rest of the team.

I can imagine he can be used in offence, but have no experience with him.

He’s actually one of the heroes I want. But, I’ve been playing almost 3 years, have a fairly deep bench including enough leveled 5*s for a mono purple stack, and tabards to spare to level him. I also like off-the-wall, hated heroes. (I leveled Atomos before he was good…).

If this doesn’t sound like you, then don’t level him. He’s a specialty hero that will be sitting in your roster that you’ll regret leveling every day.

The new buffed Mok-Arr is ok, and good for a purple mono. All the Mok-hate is outdated.

But there are those who say he is good. I have two copies at 1/1 waiting for the hero academy

I definitely do not regret maxing mine, he hits like a truck and is a staple in my purple stack. I leveled him over Sartana, Grimble and Quintus. I might have done Sartana instead, but already had 2 Seshats. Still don’t regret it.

Yup, another fishmonger here. Just have mine in the middle of the 4th ascension…tried him at 3.7. with my “Ultimate Mono Team” with Costumed Rigard, Costumed Kiss guitarist, Guardian Panther, Seshat and this marine habitant…and there is only little life left after one round of specials. So I decided to finish the Shark, and even emblem him (don’t have another 5* barbarian) to result in no life left. Plain & simple.

Apart from that, I am also starting to experiment with him and another dropout Guardian Chameleon…oh, how it will be satysfying to wreck all those doubters and critics with all those unwanted rebels

My Mokky is still just a baby shark at 3.70, but he showed potential in a raid a few weeks ago… 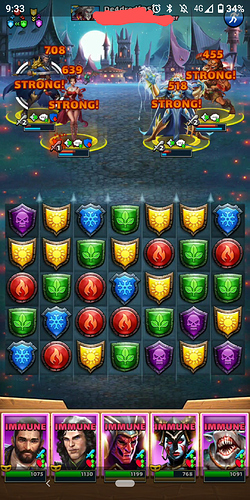 I’m sure many will discourage you and depending on your roster there may be better options; but if you like to play mono then he’s definitely worth taking to 3.70 and giving him some consideration.