I think you’d need to use it when using 3* and 4* Season 5 heroes as they start with a 20% bonus before using the amulet. I’ve not really used it with non S5 Heroes other than a maxed limit broken Xiahou Dunn

does anyone else besides me hope that Season 6 will not come out for a bit? to give time to finish the Season 5 missions (or at least, get started on the last set of missions!) before S6 rolls around

that’s just my completion compulsion talking, but it would be nice to have a break from farming for a bit…

Hopefuly Sneak Peek will clarify when S6 will arrive, but I am not expecting it just after 3-4 months from now.

Absolutely, I’ve properly fallen behind and would appreciate a pause lol

yes, a break would be nice. if i remember correctly, there was a one month break between the end of S4 and the start of S5. last provinces drop some time in March, so hopefully S6 doesn’t start any sooner than late April / early May, but who knows. (someone does, lol, i’ve worked on software projects and release dates are planned way, way in advance although exact dates can shift quite a bit)

because yeah, it’s taking me longer than i expected to finish up the sand servants, but they should be done today and then i’ll start on the new provinces tomorrow. so i’ll be 5 days ‘behind.’ but the schedule is relatively light until TU, so it will be interesting to see how far i can get. and i should be done with Underwild after this next TU so i’ll be able to use future TUs to catch up on S5 (and S3!

). as it is, i’ll probably end up borrowing time from AR to catch up again.

I won’t catch up on avatars at this point until the reduced world energy I bet. I am on sand servants and barely into it… Add another seasonal event sapping energy that just compounds the inability to grind the avatars.

Yes, the seasonal events are draining WE, and since Morlovia there is almost always one on going.

Thank you, but I was looking for a match between sand golem and sun sphinx, since I’m behind with that avatar.

Updated the graphic to fix sand golems (province 33 instead of 32), colored a few more overlaps, and fixed title in Deranged Warriors. Thank you @PlayForFun for updating the OP. 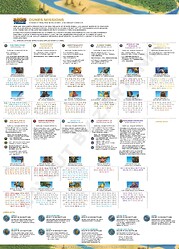 Thx, I have updated the OP with the new image.

but the schedule is relatively light until TU, so it will be interesting to see how far i can get. and i should be done with Underwild after this next TU so i’ll be able to use future TUs to catch up on S5 (and S3!

Yeah, TU and VF are my avatar farming time… for Dunes

That’s why I’ve just dumped a ton of flasks in and I’m just finishing all the hard levels and have the final missions to do after that. I want to be “done” when S6 comes

But I still have a ton of S4 missions to work on, I’m guessing S6 may be March or April since we haven’t had any hint of it in beta yet.