I’m not sure about that until I see it live. Based on what I’m reading, it seems like you can only damage chest for certain turns. Which makes me think that having a chest appear makes the timer run longer and extra points try to balance it out 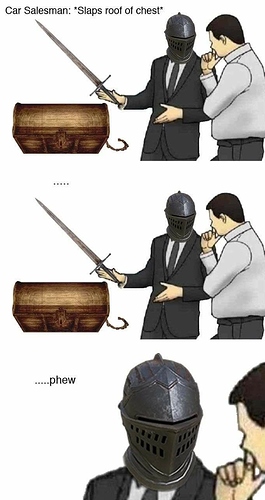 That skill is far better than Li Xiu and at the same speed… even worthy of being 5* skill. Isn’t it very OP? It will change 3* tourney into P2W event…

Very happy to see that they have decided to change the compass for some fine gloves.
Wonderland is no longer alone!
For someone with 14 compass and 1 glove, this is huge

15 new stages for each difficulty

@zephyr1 I didn’t realize the new thread, can you move this post there? Thx.

Early Information on the new Challenge Event Heroes (Pirates of Corellia, Fables of Grimforest, Guardians of Teltoc, Knights of Avalon, and Wonderland) [Part of The Beta Beat v23]

@zephyr1 I didn’t realize the new thread, can you move this post there? Thx.

Early Information on the new Challenge Event Heroes (Pirates of Corellia, Fables of Grimforest, Guardians of Teltoc, Knights of Avalon, and Wonderland) [Part of The Beta Beat v23]

I’ve been recording the Monster and Boss HP, which I’ll hopefully have time to type up at some point and compare to the notes here: 🌟 Memento 5 Events

I’m working through Rare still, but it looks likely that it’ll be fine without Emblems. I’m through 12 so far.

EDIT: I’ve made it through all of Rare now, and would say it’s comfortably beatable with unemblemed 3* heroes if you have a good team, and use some minor items as needed. As usual for Challenge Events, mono works well.

I haven’t compared the Boss/Monster stats yet, but it anecdotally feels relatively comparable to current Challenge Events.

I do think it’ll be a bit harder to get competitive runs in, though. Completing is pretty easy, but doing so quickly will be hard in the higher Stages.

I’ve added the Legendary Tier Rewards to the top post, after the Rare and Epic Tier Rewards.

That’s all of the Rewards now, thanks everyone for your patience!

Wow. Just, 10,000 Wows. I’ve been asking for this for over a year. I am a million times more excited for this than I am Alchemy Lab right now. Very, very nicely done, let’s get this on the street in September.

Completion rewards are really awesome. I’m excited to see so many emblems in it (might they increase also rewards from chests, tourneys and class quests?) and the coins are the best reward in my opinion. If you complete all three stages this means one free summon and if you defeat 5 of this random monsters per event, it’s even 2 free summons. So everyone has a chance at these new desired heroes. This was all I hoped for and they implemented it. I’m very happy to read about it

Also worth noting but stats are overall fairly high for a 3*, he puts Carver to shame and many other 3*s too. He even rivals Vlad in stat total. Either his attack or HP stat need a nerf imo, possibly skill too so it just affects nearby allies.

Lets compare all 3* who hit all enemies:

Oberon and Jahangir have similiar skill but as Oberon is tankier, his skill is lower.

Meanwhile, Bauchan and Carver have similiar skill, using the same logic, as Bauchan is tankier, his skill should be lower but what they give is the skill is not only have higher number but also extra mana regeneration. This hero is really ridiculous.

Really happy to see them expanding the loot tiers. While I’ll never be competing seriously for the top positions, in the current setup there really wasn’t any reason to bother. Just played it for the completion rewards, making no attempt at all to go quickly or score points. Having tiers I can realistically reach, even if the reward is nothing huge, gives me some motivation to try.

Agreed that combination of skills looks much more in line with a 5* than a 3*. I mean slap that same special on a 5* and Boss Wolf will be asking why the hell he’s Very Slow.

Either the damage all, mana cut all and +mana gen for all needs to become damage and mana cut to 3 enemies and mana gen to self and flanks or it’ll need to lose a skill.

Grateful to you for this yeoman’s epic work @zephyr1. I hope they quadruple your salary!!!

Oh, this sounds cool. Will these heros already be available in septembers avalon event?

I checked Beta to make sure I hadn’t just missed it, and that’s correct, there’s no avatar for Ranks 11-500.

Thank for checking again and i hope they will change it.

Would be nice if the non beta folks also have a run at the stages. I see definitely an advantage for the beta players in the new Challenge Event. If you compete for the events top 10 you rely on items and know what to use during stages so it would be fair to give everybody some free runs, just my thought.
Rest of the changes I applaud

Please tell the Devs it highly demotivates the players trying for a good score that still only one is getting the hero. They should just add a 5 star to rank 2-10 (it could be the old 5 star from this event). Rank one should be the only one with an avatar.

Also the random mobs shouldn’t increase your score. This is just to random.

I am sure those changes would even increase the outcome for SGG because way more ppl would try for top10.