Two Bai Yeong in single summon, is it possible or is it photoshop? 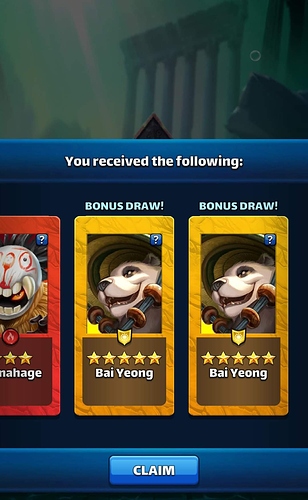 Two bonus draws? No I dea but “Bai Yeong” sounds like some kind of Chinese dumpling.

It is possible, it had been discussed in another thread though I forgot which one…

Never seen this before General Discussion

Me got Vela doubles in one 10x.

So it’s possible. And I seen triple bonus draws in youtube.

And i got mine as a bonus on a one pull. Doesn’t make me love her more. Sonyas are what i want; a five Sonya mono.

Thanks for the reply. So basically bonus pull can trigger another bonus pull? Interesting. Though given that chance of that happening is 0,0169% for any pull eligible for bonus pull, I don’t think it has any value beyond curiosity.

The odds are astronomical but it’s conceivable you could get 10 bonus pulls. I mean at that point you want to hit a casino because you’ve probably been the recipient of a magical luck potion but RNG be RNG. Sometimes the “impossible” happens.

Tha’s crazy good luck, depending on how much you like the yellow panda ofc

Well, it is possible, as also the bonus draw could generate a bonus draw but:

Surprisingly, on every screenshot with more than one HOTM I have ever seen, nobody shared the complete screenshot or a screenshot from the recent activity log. Therefore, I am pretty sure it has been a 10- or 30-pull.

I mean at that point you want to hit a casino

I think this is the point where you’d want to resolve to never visit a casino again, because you’ve used up all your luck in this life (and maybe the next).

Yes that is correct…

Me got Vela doubles in one 10x.

Thats actually normal, because each 1 have chance of 1x HOTM.
And I have seen shared some video pull like this.
The OP ask about 1xpull = more then 1xHOTM.

It was two or three thread already discussed, and that said… each 1pull have a chance of 1xHOTM, and 1xHOTM have also a chance to get another 1xHOTM. But I never see the video, only screenshot which is actually it can be 10xpull not single pull. I’m not saying that it is imposibble.

Well, I have no doubts about the possibility, it’s just curios that nobody ever provided a screenshot from the recent activity log, isn’t it?

Happened to me off of a single pull as well. Happened about a year ago though and never got a screenshot of the activity log.

Did another single pull right after that and got another one.

Someone from our line group made a 30x atlantis and got 4 bonus draws, damn awesome. Bust rest was crap.

I’ve seen a post in a Kingston thread before where someone got 3 Kingstons as bonus draws in a ten pulls. And that’s after 2 legendaries as well. It’s probably the most insane 10 pulls ever