Never seen this before 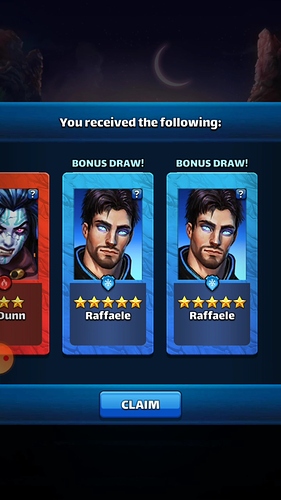 That’s the Hero of the Month (HotM), and two of them. Congratulations!

In theory, infinite number of bonus pulls can be triggered from a single pull.
In practice, majority of us get zero… zilch… nada!

I don’t think of it as “bonus pull” but bonus from pull. That being said, it do not trigger another bonus as it is not another pull.

Lets just ask @Day-Walker whether that come from a single pull or 10× pull or even 30× pull.

@Day-Walker To be honest, it does not really matter if the bonus pull, pulled a bonus pull or not. You are very lucky. I am guessing if you have never seen this before you are either relatively new to game or incredibly unlucky no to have seen it so well done.

Enjoy your new 5*'s and don’t be discouraged if someone on the forum doesn’t ‘rate’ this one or ‘X’ hero is better. He is yours and in time will no doubt be a great addition to your team.

If you check the activity log it will show where in the 10-pull the bonuses were triggered as the two Raffaele will not be at the end (unless one was the tenth pull).

And yes, this hero is a good one. He only pales a bit compared to Ariel.

Not new to the game, never seen 2 bonus draws on 1 pull.

To be honest, it does not really matter if the bonus pull, pulled a bonus pull or not.

Just knowledge purpose because as far as I know, bonus HotM is not considered a separate pull that can trigger another bonus.

It is exceedingly rare but I have seen it discussed here a couple times. Congratulations.

Fair point @yelnats_24, and I am not looking to argue the point, so my previous comment …

To be honest, it does not really matter

@yelnats_24 - I think I have seen an instance of two bonus pulls from a single pull… can’t remember for the life of me whether it was here on the forum or on reddit. I’ll see if I can dig it up…

Apparently bonus pull is a pull.

HOTM is supposed to be hard to get? General Discussion

So, in the “wtf” category, another player in my alliance had this happen yesterday: [image] I didn’t know that was possible! Apparently even the bonus draw can trigger a bonus draw!?!? Yes, this was a single pull, probably from a token.

Apparently bonus pull is a pull.

Aah… thank you so much @nevarmaor.

Now that is a definite proof, a single pull.

Seems like the perfectionist in you is satisfied now!