And yet Master Lepus is miles behind his colleagues from the same family, in stats.

If you let them charge and use their skills in the upcoming challenge event, then they will be very hard to be taken out, and of course the stage effect can trigger this buff too.

They should then do the same with older ninjas, for example

It’s a surprise to myself - because I likely won’t face these heroes in game very often - but all I can think of when I read of them is, that a nerf can happen just like that.

I can’t imagine how it must feel like, chasing after them with real money upon release, only to see them nerfed later.

I don’t even know why it bothers me so much - it’s not like every new hero gets nerfed recently - quite the opposite actually (right, or?). I guess some things just sound ‘too good to be allowed to be true’.

Good luck up there, both getting them, keeping them intact and battling against them

What’s funny is these stat increases will not matter in a month or two when they release even stronger heroes lol. They do it for money clearly, but the way power is moving up so fast, even their own idea from November doesn’t match what the strength of the gargoyles theyre about to release.

I do believe a small portion of what they do is legitimate balancing. The event heroes are typically some of the strongest heroes in the game. You don’t want to outclass older event heroes because you’ve brought out new, stronger heroes.

They have two choices as far as I see it. They pull back and slow the releases so that people can use the heroes for a while and THEN move onto a new portal. I think this is ultimately what a lot of people want. But they chose the option of pumping out these nasty heroes. Now they’re playing catch up so they don’t ruin the other portals theyve already built. I’m not glossing over the money grab, but there is some legitimate balancing going on imho.

Staff has just announced that Hohenwerf will come later:

(Hohenwerf will not be coming in v48)

Please note that Hohenwerf’s release has been delayed.

I’m sad…. I was hoping to pull dupes of that guy

Delay the release of the most wanted, typical, right? Now the whales would pull two big rounds, instead of just one. 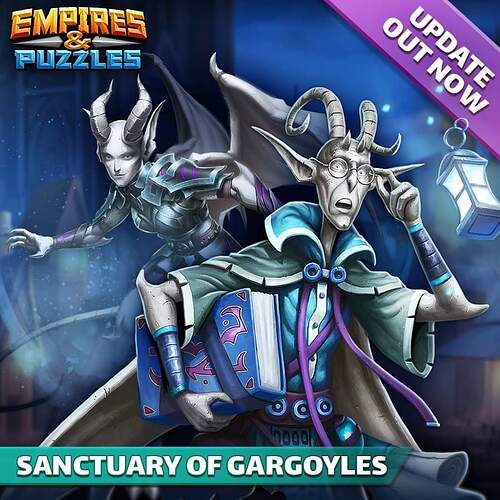 Where is the left one ?

I don’t understand this narrative. All of these gargoyles are really good, is he the best? maybe? For my roster I’m looking forward to Arco the most. This only increases my chance of getting Arco. I used him in Beta and he was very good, but Arco was still better, in my opinion, even after the nerf, especially when paired with Frosth and Pengi.

If they feel he is not ready for prime time then, he is not ready. If they released him and he was broken people would be complaining about that too. That mindless attack at fast speed is probably too strong and they are probably having internal deliberations about how to fix it. I’d rather they delay it until the next portal rather than nerf it later and cause another krampus/telly fiasco.

Can Hatter steal their Stoneskin buffs ?

Every time this Gargoyle casts a Special Skil, their Stoneskin hardens. The next 1 times they receive damage, it is dropped to 1. This effect can’t be dispelled.

It is undispellable, but I am not sure if that protects again stealing or not.

If you can check that can it steal other undispellable buffs, then you can answer this.

It is undispellable, but I am not sure if that protects again stealing or not.

Anchor tried stealing the Stoneskin with The Hatter during a recent Youtube stream – did not work.

Also, he tried Malosi to block the Stoneskin – this did not work either.

I am upset that Hohenwerf has been delayed, I was hoping to get him. They’ve never done this before (at least to my knowledge) with events where they postpone 1 hero. They do that with the seasons and only the challenge festival costumes.

I will still do pulls hoping for Arco but definitely not as many as before, now I will save my gems for next month’s wizard tower

With that picture of another gargoyle, makes me wonder if they are planning on releasing gargoyles one at a time or more in the future like they did with the old events (added Black knight to Avalon, Finley to Pirates, etc). You can see in Version 48 notes, they mentioned “more to come” after the list of gargoyles. With the last event heroes, they were released much later so I wouldn’t expect new ones to come soon but clearly HoHenwerf is delayed and there’s artwork for a new one

Yes, I have not seen that a challenge hero is removed from the portal earlier just 1 week before the release.

Maybe Staff reconsidered that he is too OP to be be released or they just want have some income later, when this event comes next with maybe more non Beta tested Gargolyes what we see in the picture above.

I was planning on doing a few pulls and fire is what I need and have mats for.
With Hohenwerf being held I’m not excited about El Duque so I’m gonna pass on this event. Save the gems for the next go round

I think hatter couldn’t steal as he attacks first making the old stoneskin be used and can’t be stolen. I tested diaochan, and because of three minions attacking it got rid of stoneskin before it could be stolen. I’m going try get a circumstance where I only have one diaochan minion….