🐼 Zhuge Liang – 5* Holy / Yellow from War of the Three Kingdoms

Mine is sitting at 2/60. He does a little bit of everything slowly but nothing stands out.

Zekena is definitely worth the mats

i have him on my roster but his speed should be at least average, at slow speed he could be dead before even 1st shot

Maybe I’ve just been unlucky but I’ve fought this guy 3 times, once paired with Lu Bu and I got absolutely demolished every time. Could be I had bad boards, could be a lot of things. But when Zhuges and Lus fiends went on me, I couldn’t get them off. Total over 1300hp, the counterattack seems weak, but if you can get rid of the minions and you’re dumping tiles, that damage adds up fast. So in my opinion, I think he’s great. He just wrecked me again in this bloody battle as tank. I think he’s being underrated.

Has anyone else fought him and thought he was trash? I mean everyone dies over how awesome hulda is and she is super easy to murder imho so I don’t get it. Maybe I’m not getting something with Zhuge, maybe I just had bad luck.

Ah that’s interesting, from my personal experience I’ve gone up against him twice in defense (both times LB+20) and had no issues with him as managed to take him down before he fired. Can’t share any experiences with him firing his special on me

once paired with Lu Bu

Lu Bu it’s a very dangerous hero if he gets to fire… I lost against him 2 out of 3 different ocassions… So it might have been more about the other heroes in the team. But he seems to be very rare on defenses anyway

I faced this guy today 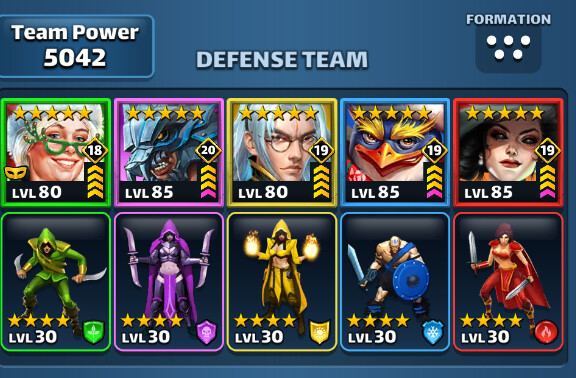 First time was a bad board, Ludwig managed to fire and it was over with, Zhuge Liang started stacking Minions up on me, C-Ariel couldn’t heal enough to get rid of one minion from him, and once he started
to get the mana regen from Ludwig I got destroyed. The counterattack was a pain with the bad board and fiends…

Second attack on that defense, decent board, got Ludwig out of the way and it took no time to take the team out…

Bad board and the right defense setup and this guy is a pain… decent board not so much.

Hulda really is an offensive hero. She’s amazing, but not impossible to beat.

You’re one of the first people I’ve heard say that and I can’t agree more.

I wasn’t going to level him because he’s slow. But I have xnolphod and I just picked up Ludwig. Using a level 17 magic troop and xnolphods mana boost I can get Ludwig to fire in 9 tiles. So clearly I can do the same for Lu Bu. That makes him extremely dangerous. If I don’t pick up alfrike or bera here soon, he will be my next purple to level up.

As much as I am not impressed overall, I am going to level him for two reasons;

Those are as good of reasons as any… I have costume joon aouda a second hanitra and zhuge comparing for data and i don’t know who… If any i like out of that group.

So basicallly, you’re saying he’s a niche hero. Only suited to certain war or tournament formats. Regular raids he’s no good. To me, he’s a terrible hero from what’s been put out lately

yeah his skill has some potential and is also new in this combination… that’s true and fair enough regarding the excitement a brand new event hero should(?) cause.

I faced him in let’s say a hand full of fights now but he’s really not shining as a tank, flank or even wing, just in imo of course.

Nice in def, yeah. Helpful on off, yeah. But it feels underwhelming nonetheless, since he’s slow and really is not doing that much of a killer move.

I will say that I’ll always choose my

before him (duh) but also my homeboy Malosi and also Devana. Those are Hotms, so easier to get, but they feel way more useful in terms of skill-speed -relation and also creating synergie across possible battlefields.

Also cross colour comparison with other fiend/minion summoners does not turn out in his favour. That’s Noor territory, deserves love yeah but without additional mojo he will not stand any comparison or competition (ok except rush)

And here’s my final argument why he’s really underwhelming: he’s even worse then Lubu

It is such a weak hero. Given Zhuge Liang is one of most famous characters in Three Kingdom stories, and usually the strongest hero in games in this theme, it feels that the developers really didn’t do their home work in designing this series of heros.

I genuinely think they will get a buff. If these heroes are anything like the other event heroes, they’ll get buffed. If people aren’t pulling heavy from that portal because they think the heroes suck, SG will fix that for sure.

Honestly, I think most of the heroes in the portal were underwhelming. Guan yu and Diaochan were the stars in lefendary. But are they enough to keep people interested, I’m not sure. I also think that’s why they held two heroes back. Let’s see what happens but I would welcome a buff. I think Lu Bu is pretty good as Is but Zhuge needs some love.

To be fair I don’t have Elizabeth or Hannah or really any fiend creators aside from Motega, so Zhuge does have purpose for me. Niche for sure, but that is okay.

The best hero in the game beats loki.

His counterattack seems to be capped to the health of the minion, a one tile hit basicallly removes his counter attack.