Has anyone else noticed that Zagrog, and Wu Kong don’t complete each other with the skill. Example when I activate the wu Kong skill the only hero that is without the 185% attack bonus is Zagrog. Is it just a bug in my game? I haven’t seen anyone complain yet.

Zagrog is immune to all effects that influence attack

Zagrog is immune to all effects that influence attack

Resist: This hero has innate resistance against all status effects and stacks that effect attack. This includes buffs.

This… Is why i think zagrog is not a great hero. Can’t even use boldtusk to increase his attack. 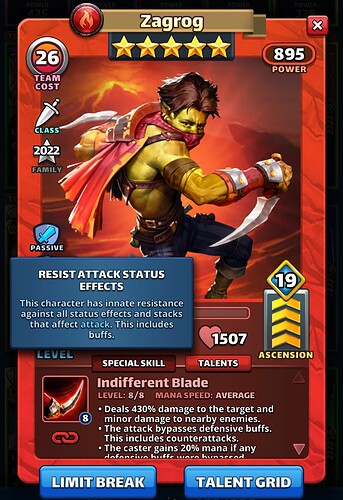 Zagrog will resist any attack buff or debuff. One more thing, if the special includes more than just the attack buff/debuff, he resists it all - for example, Gazelle’s dance or Wu Kong’s miss.