@Ugk26 does Bastet takeover Xnolphod as tank now that he’s been nerfed?

I like and hate this so I’m still confused lol. Thanks for responding!

Welcome to the September 2022 Balance Update! We’re pleased to report that the August 2022 Balance Update — in which we toned down a few outlying performers, gave a boost to one struggling newcomer, and doled out buffs to a handful of older Heroes — did its job well! This month, we’re looking to do more of the same, with a slightly stronger focus on restoring Hero diversity to the top levels of play. As many of our players have been noting, Defense Team compositions that revolve around maximiz…

@Kenzo Well, looks like we’re going to find out aren’t we lol.

Yeah guess so lol. I mean he heals more now, making him a better healer just less impactful with his mana abilities

SG already got enough money from xnol, now they want to create another OP heroes, then nerf them afterward for the sake of balancing

Little boy thanatos is their next xnolphod cash cow.

Here‘s the thing: I only got him a few weeks ago and power leveled (at least by my standards

) him. Just a couple of days ago I decided to limit break him as well. Why on earth would I‘ve done it, if I had known this mess?! And there is no way to reset the LB… Disgusting! If they would at least deliver a possibility to reset the LB… 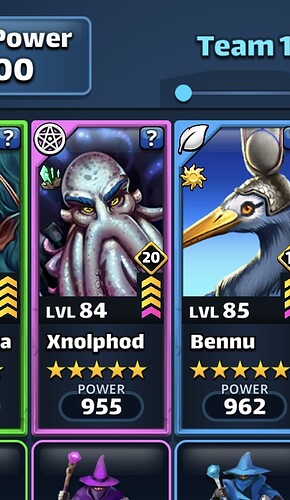 He is still a powerful hero, but now he is more a healer than a mana booster. I got him last time he was featured and “power leveled” him too. I don’t regret anything, but now he seems to be just… almost a regular healer. Not terrible, nor awesome. I will surely replace him by another purple in my defensive setup.

This is unbelievable!! Xnolphod is not more OP than other purple tanks in the game and they featured him recently. Lots of people (not myself as I had him already) but a lot of people spent a lot of money summoning for him and they did the same recently when CAlasie was Featured and subsequently nerfed. I don’t mind a balance update if its warranted but dont try and rake in a bunch of summons if that’s on the cards, Seriously guys come on!

Next round. When he gets his costume. He will become a booster : health-wise plus mana-wise (moderate mana per turn for 4 turns)

SG wants to sell new toys replacing xnol as mana booster, that new mana booster toys will be one of the nyx hero that will be available soon, and that new toys will boost 15% mana only with 6 tiles (so basically even better than xnol) and boost 30% only with 9 tiles.

Also when facing Bard heroes, the passive reduces mana increased by special skills by 50% so that means your team will only get a 5% mana increase when he fires

Xnolphod is (or was, more likely) a one year old hero. Nerfing him is just absurd… serves no purpose other than SG’s need to replace him as top hero, for pecuniar reasons. Just like Vela, Xnolphod is a colateral of his regular team mates getting too strong and too fast. Not long ago I had a thread about how today’s defenses become too fast for the damage output they have. To me, this Xnol nerf seems like SG aknowledging that problem and nerfing all those instant team killers by denying them Xnol’s mana boost. Another hero butchered to slow down his teamates… however this nerf is one year too late… SG manner of handling these things is nauseous… makes me sick… once again, they show total disregard for all those who spent money chasing one of the best ever E&P heroes and wasted precious materials ascending and breaking him. Good bye, you ugly octopus, enjoy retirement. Shame on you SG! As if you’d give a damn…