I ask you to count how many points the alliances A and B will receive for the war under the following conditions:

Each team is not worth the same number of points. The points per team are divided proportionally based on the health of the heroes.

Each alliance is worth roughly 1500 points, give or take a few for rounding

In my example, all the teams are the same and stand alone. The main question is, how many points are different, although both sides acted in the same way?
My answer - because to do it, feel the cost of 1500 commands for both teams is a mistake. This gives a great huge advantage to a larger alias.

Giving each an alliance of 1500 is a mistake (or stupidity) because in this case a larger alliance will receive more attacks and a higher price for each attack (teams of a smaller alliance are more expensive). Double advantage.

Some stupid decided that alliances should cost the same, regardless of the number of rival teams, and all the rest also stupidly turn, not even trying to calculate the results of ideal wars.Count the points in the war, when there is one player in Alliance A, and three in Alliance B. Spread the 1,500 between the three teams as you wish.

.A huge difference in the score. Due to what? Due to the stupidity, which is called “every alliance should cost 1500 points.”

I see what you’re saying. They addressed this in matching. You’ll be matched with an alliance that has the same number of active players, for this exact reason.

We were given opponents having 1-2 teams more, which is equivalent to a bonus of 12-24 additional attacks. I don’t understand why in this case, instead of reducing the cost of our teams in relation to the teams of the enemy and equalizing the chances, the developers give the enemy an extra bonus by increasing the price of our teams.

Here is a recent example where different number of teams

Your maths are correct at first view but the reality is not this at all !
I have been often alone in an alliance and opposed to another with 3 members, each with 1/3 of my power.
I win 3000 pts but they can’t kill me entirely more than one time and get only 1700 points.
When you suppose the 3 are all equals to the one alone, it’s wrong…

Can you make a total score of all players including bonus for the kill?
What you are doing now is unfunded and does not contribute to a discussion.

And how do you calculate 12 attacks extra?
1 player more than your team should give them 6 attacks more, not 12.

(you can edit a reply as well

Our teams are priced more expensive, which gives an additional bonus to the enemy in about 6 attacks.

In addition to a larger number of teams on the field, the enemy has stronger defense teams, a larger account of the war (by 11 thousand). I do not want to call such a system of selection and calculation of points unfair. I want to call this system just idiotic.

We lost with a score of 4948-4954, but not the opponent, but a scoring system containing a gross error. It turns out that of the 12 bonus attacks received by the enemy, we won back 11. If the points were considered correctly, we would have won with a score of 5278-4644. We played perfectly, better than the opponent, but the miscalculation in scoring points again gave the victory to the opponent.
A gross error in the calculations is just a mistake that can be fixed. But a mistake that is not corrected for more than half a year and which steals deserved victories from thousands of players is no longer just a mistake, but stupidity or even meanness from developers.
If developers are not able to correctly calculate points and pick up alliances with the same number of players on the field - let them forcibly cut off extra players in a larger alliance so that there are the same number of teams on the field. But giving a head start in 12 attacks (as is being done now) for an extra player is not fair.
I think it would be fair to recount the results of those wars where the smaller alliance lost. I guess he would have won half the time.

Mister NPNKY, you wrote:
“You’ll be matched with an alliance that has the same number of active players, for this exact reason.”
And they gave the enemy, where 1 player more. Why?
Enemy alliance Black Rabbits {Reloaded}

Can you confirm, with screenshots, that all players participated? That is, that twelve opponents played against your ten? (We have been matched to an opponent with more players than us, but those extra players never played.)

After that, you still are dealing with the win/loss system that—after a number of wins—will match you to a stronger opponent.

What I’m hearing is “we lost and it’s unfair”. I’m not really hearing a defense of why you think so, that answers the current war set up. Merely repeating that you think it’s unfair (while understandable) doesn’t necessarily make it so.

10 and 12 I cited in order to show that the calculation algorithm is incorrect (this produces integer numbers for the price of commands). And here is the result of the last one, where the enemy received a bonus of 12 attacks and we lost with a score of 4948-5056, i.e. 108 points. With an average attack price of 57.5 points, the bonus was about 590 points. We had to win, if the points for the team were considered correct. 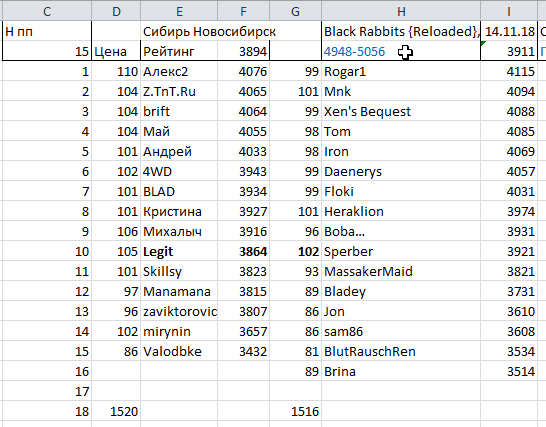