I admit it. I’m a hero hoarder. I am reluctant to use heroes as feeders who may come in handy later. Plus, I love my rainbow attack team even though it would seem that the prevailing wisdom is that it is better to construct your team with one or two elements. So, I would really love some help figuring out which way to go with my motley crew. 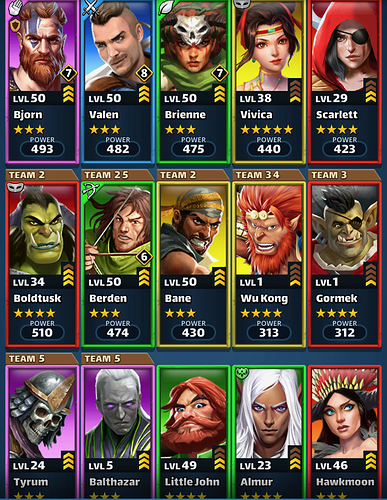 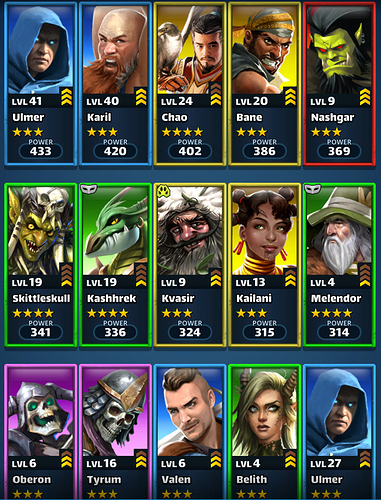 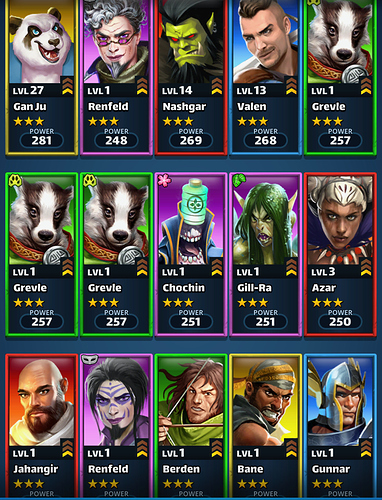 Personally, I am a fan of building up the teams slowly. So, I would say, focus on all your 3* heroes, especially the Fire ones.

This is because having more fully-levelled 3* heroes would let you at least complete Rare Tier Challenge Events. The Rare Tier would restrict your use of 4* and 5* heroes, so no point levelling up some 4*/5* heroes (partially), where you would be unable to use them to complete the event. On the other hand, the Epic Tier and Legendary Tiers have no restrictions on lower level heroes, but having 3* heroes mixed with 4* heroes would not be that helpful to completing the higher tiers. (Although, it must be said that a full team of 4* heroes can complete Legendary Tier.)

I recommend focusing on 1 hero of each color, and staying on them until they are maxed.

purple
balthazar - finish
tyrum - finish
renfeld - and costume
Then…that’s probably enough purple 3’s. I like Chochin and Gil-ra, but they have limited uses, and I’d say to come back to them later.

red
hawkmoon - finish
boldtusk - and costume. Titan essential.
gormek - def down is helpful all over

yellow
kvassir - useful in anything limited to 3’s, he’s great.
wukong - Most important hero right now. Titans are the best source of ascension loot, and Wu can massively increase your scores.

I’m a unique hoarder as well. Especially since I’m new and in need of finding the stronger heroes right now. So when it comes to 3* heroes, I personally don’t see a need to keep more than 1 hero and 1 costume for said hero.

Then, focus on 1 hero of each color and ascend them to the fullest level. As to whom, that depends on your playing style and need for tam synergy.

I have tried both rainbow and color stacking. I have found equal success with either. I think it depends on the quality of the board, if you can see combos when you look at the board, and knowledge on when to use a heroes special ability.

Best of luck to you.

Thank you for your analysis.

Can one get a costume separate from a hero? I thought they came together. I must confess, the costume thing has me bumfuzzled. I can tell Renfeld needs his to be useful; however, Boldtusk’s does not seem that helpful. And do I level the hero first and then level the costume?

Then, focus on 1 hero of each color and ascend them to the fullest level. As to whom, that depends on your playing style and need for tam synergy.

That does make sense. Since I am involved in Alliance Wars though, I want to have plenty of heroes for each flag. So I’m gradually building up six solid teams.

Thanks for that. I know that as I play, it all will make more sense.

I am a hero collector, so I level up all the possible heroes, even widely panned ones like Renfeld, Dawa, and Prisca. As the costumes (some of them, anyway) have proved, previously low-rated heroes like Renfeld now have their value!

Generally, duplicates are not very useful (provided you have the time to level them), especially 3* ones. Unless you want to be competitive in the Rare Tier of Challenge Events. The general advice is to feed all duplicates easily pulled from Training Camps (since you can always pull them again at a later date), while those from Seasons 2, 3, Seasonal and Challenge Events may be kept since they are harder to come by.

It seems inefficient to have 3 Valens, for example, and 2 of them at different stages of levelling. It’s better to level different heroes. For example, your Gunnar will come in useful sometime, especially when you colour-stack them (Ulmer, Valen, Gunnar, Karil, Valen) against Red enemies, in say, a Rare Quest (Mount Umber).

It also depends on how much you are spending. Many folks would advise keeping duplicates if you are unsure of whether to feed them away, by buying more roster space (which costs more and more gems as you increase the roster). If you are free-to-play, then keeping as few duplicates will free up space for unique heroes that you pull later.

As for costumes, you do not have to wait until you get a costume (which comes with the hero again) before you start levelling him up. It depends on your progress in the game. Oftentimes, some players have no priority heroes to level up, and this is when they would train up the less needed ones, like Renfeld. When you finally get Renfeld’s costume, then you can train up that costume (which is levelled separately, indeed), but at least, your base hero is already fully maxed by then.

There is a useful thread on which costume to use, versus the base hero, but at the very least, training up the costume gives a bonus that boosts the base hero’s stats.

Costumes… Whats the Point? Which is Better?