[WORKING AS INTENDED] Ninja Heroes under AutoPlay AI hold until 3x to fire? Every time?

Was lucky enough to pull Onyx, a new ninja hero. I gave him a test run on a easy level and set it to auto. Looks like the AI won’t fire his special until he’s completely charged up to mana lvl 3. I assume this will be the same on defense. So does this make him a slow hero?!

Don’t know about using it on auto, but I do recall the discussion about how they would function on a defense team. AI “decides” randomly if it will fire at 1, 2, or 3 charges with no clear indication ahead of time what level it will go to when you’re fighting them. I don’t see ninjas as being stellar defense heroes, but they will be big on offense I suspect.

Did it always go to charge 3 when offense was run on auto?

Yes, every time. I redid the level with the same results.

That doesn’t seem right to me, but what do I know?

@DaveCozy @Guvnor Would you expect the ninja heroes to behave on auto like they do on defense- randomly deciding 1/2/3 charges before firing?

I assume it is the same for AI while autoplay.

Ninja heroes, how does work in defense? Gameplay Help & Tactics

Cozy has explained it above but:

How will the defence AI handle the multi-charging of mana?

“When encountered as enemies (in both map stages and PvP modes), Ninja heroes will sometimes wait before using their special skills, allowing them to use their 2nd and 3rd charge levels.”

Regarding the Ninja Heroes now sometimes “holding” their special firing for 2x or 3x charge, I will add some information here as this has a major affect in the Ninja Tower Gameplay:

I’ll shift this over to a #bugs-issues section and see if staff have an answer.

I’m observing Mica on auto, and I notice sometimes he holds on firing his effect until he has three mana charges built up, but sometimes he fires it with one charge. It doesn’t seem to matter whether the associated buff is applied–sometimes it is, sometimes it isn’t. So it seems… well, random. Or is there some underlying logic I’m missing?

Ninja Hero Thoughts & Discussion Thread That specifically states tho “when encountered as an enemy”… So on offence under the AutoPlay AI Control I suspect that they SHOULD behave that way too but don’t… I’ll shift this over to a #bugs-issues section and see if staff have an answer.

I’ve noticed the same with Agrafena. Sometimes she will just not fire at mana x 1 and holds relentlessly until mana x 2 (where she is useful). Other times she just relentlessly fires at mana x 1. I have determined until I work this out, she has to be controlled manually.

Ninja heroes, how does work in defense?

a second rule, if Ninja has 1x, or more charge, and X% HP. Ninja will immediately use their special skill

So try to kill a Ninja with 1x, or more charge, wounding it may trigger its special skill 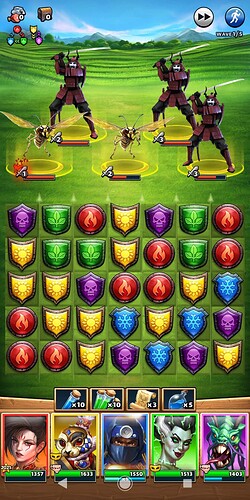 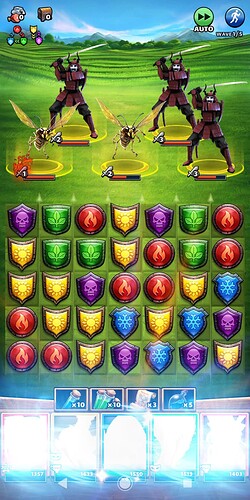 Zircon fired twice in auto on level one …one after the other in another auto, board starts i made a blue diamond put in auto he fires (at the start) auto hits diamond he charged at level 1 again and fires agian …

I have only 1 of these multiple charge heroes and it’s Motega. Sometimes I look down at a whole army of Butterfly minions, sometimes he won’t fire until 2nd charge all match.

Just reassures me that we haven’t quite reached Skynet taking over yet AI levels.

Well, Petri said that and that’s still pretty cryptic. He said working as intended but what is the intention supposed to be exactly? Always waiting for full charge as per the initial bug report? Or casting at random charge level like on defense, which seems to be how it works like nowadays? So was it working as intended then and bugged now or the other way around?