This is the first time that I have been able to seriously try a legendary event. (With a 4-star team and 3-star troops). I finished 9 levels relatively easily (some heals, bombs on the 9th level), but the 10th level seems to have had an exponential jump in difficulty – my hits were doing 13-15 points with the right color, around 9 with a neutral color, 6-7 with off color. Even with 5 bombs, 5 axes, 5 arrows and 10 middle healing potions, I only got the bosses down to about 10%. Without items, even three continues was not enough to beat them.

Is this typical for the last level, that it is a serious jump in difficulty in comparison to what went before? (The same team completed epic with no problems, rare used a different team, obviously.)

Ah well, I am now resigned to not getting the gloves, shield, and cape. Would have like to get the summon to offset the 300 gems spent.

(Can somebody move this to general discussion? I thought that was where I had put it.)

Do you have Proteus?

This will help you analyze the jump:

Any suggestions to defeat legendary wonderland

Adding these in for easy reference for this discussion: 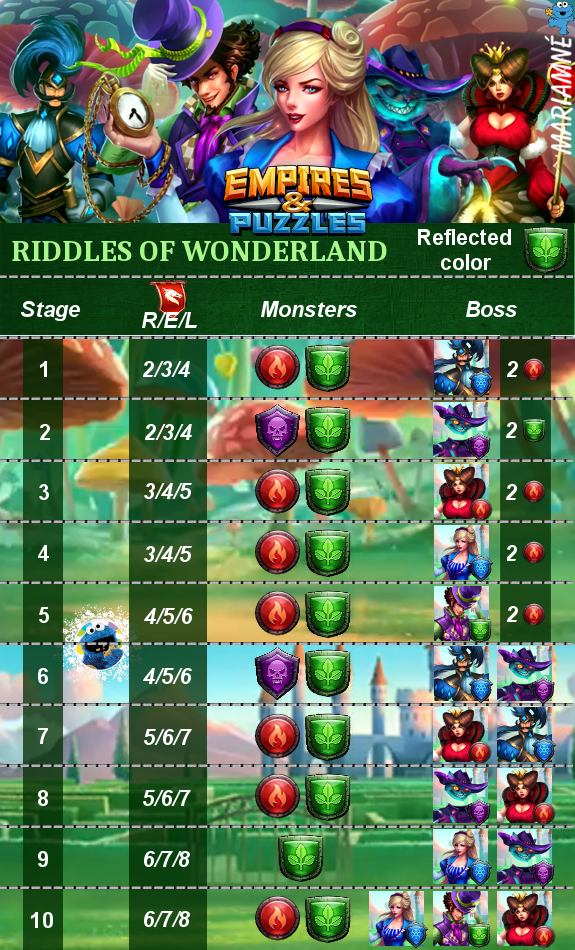 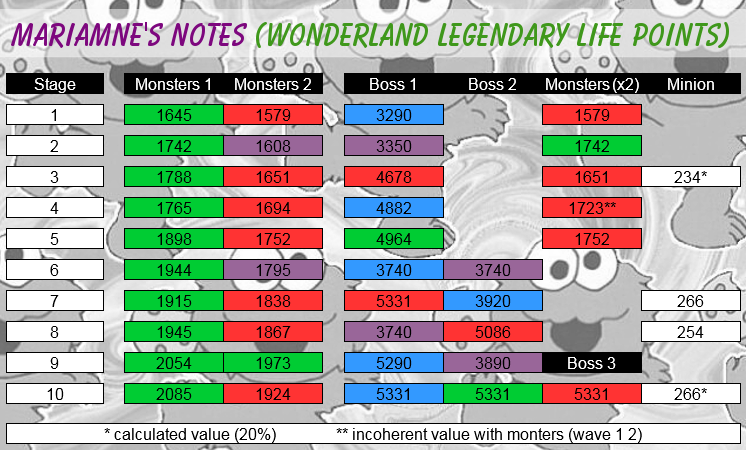 Based on the HP, the mobs didn’t get large jump. However the bosses you fight is quite a jump, instead of one 4* and one 5*, you have to fight three 5*

What kind of team did you use?

Use those items
Maricle Scroll
Dragon attack
Bombs
Axes
Don’t use em till you reach the boss room.
You will pass it.

Thanks @Petri for moving

My general rule of never using “continue” was pretty much proved here. The continues were pretty worthless once I had no items left to actually incur damage on the bosses.

Beat the last level with this team using some Mana Potions and 4 Bombs. Proteus makes your life much more easier, he’s a beast. The bosses haven’t thrown a special at me 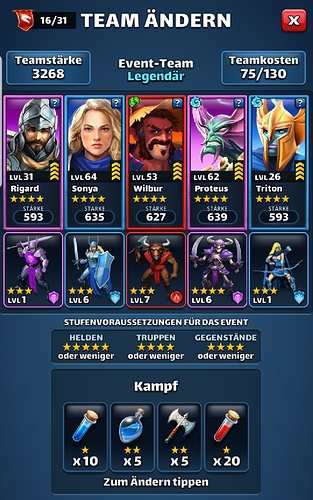 Proteus is my Atlantis goal this month… Probably won’t get him, of course…

Yes, Proteus is really a beast, he can even bring this team to complete legendary:

Any suggestions to defeat legendary wonderland

Thanks for all the guidance and advice. Proteus (+ mana potion for stage 1-9) really save the day, with him, even 4* 3/60 team can finish the legendary (with some axes, bombs, and dragon attacks for stage 10). 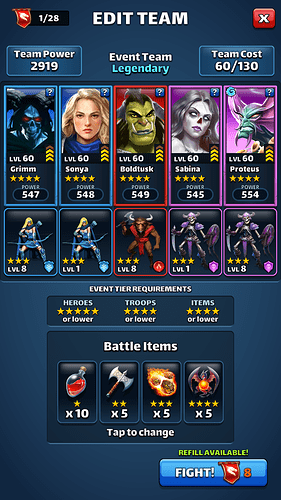 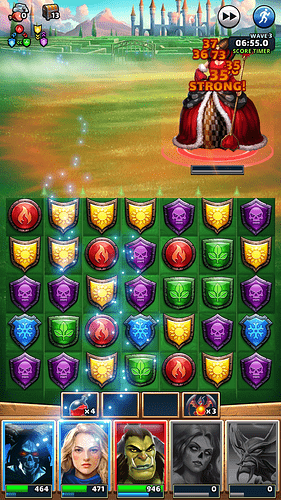 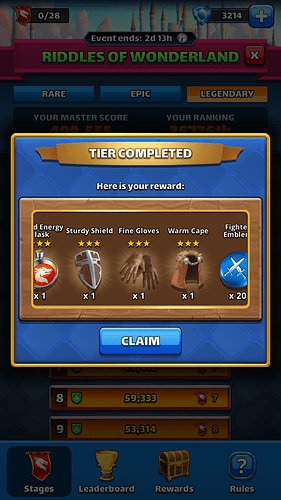 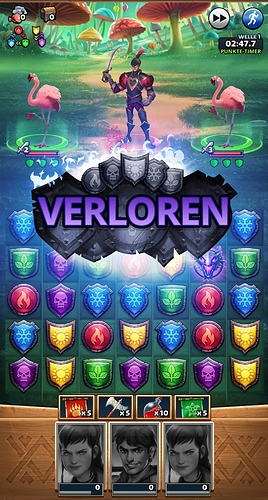 I was surprised by the jump in difficulty too. Its my first real attempt at a challenge event. I had kiril, hu tao, scarlet, Tibertus, buddy all at 4/70 or 4/60. I just made it through using all items 20 minor health, 10 mid health, 10 minor manner and a miracle scroll and finishing with buddy and Tibertus Alive. Was a fun fight, a good to have a real challenge. I don’t have any bombs or dragon scrolls or such like as I haven’t upgraded those buildings far enough yet.

The biggest problem I see with your lineup is you only have one damage dealer. With bosses this tough, your best option is to take them down one at a time, and hopefully take the first one down fast. If they’re all up for very long and keep being able to throw their specials at you, you’re going to have a very hard time keeping your heroes alive. Especially since Wilbur’s defensive buffs are going to get stolen. You also don’t have any defense down. I found I couldn’t do enough damage without both attack up and defense down in effect. I made it through ok, but had to use a few timestops to manage it. Reflect damage can also be really useful against tough bosses like these.

My lineup was Sonya, Boldtusk, Kiril, Elena (3/70), and Tiburtus. Took the Queen down first, since she was going to steal damage anyway, then worked my way left from there. 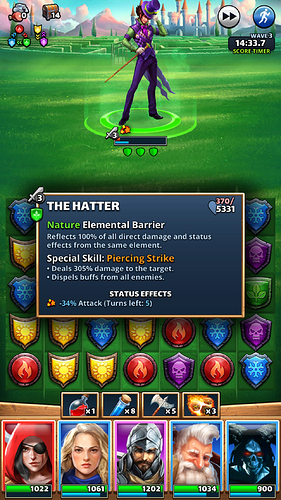 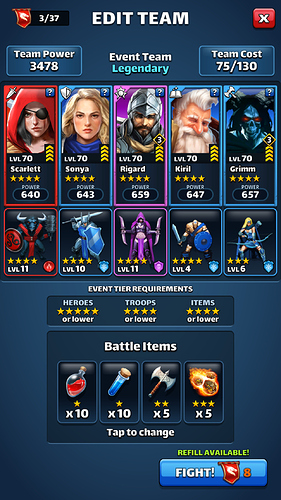 Proteus is best but by no means necessary, neither are high end items tbh. Vanilla 4* team and 2 bombs and pots used in my fight.

You do need to be super safe and careful though. My boss fight revolved around timing my tile cascades and their specials so that I had Scarlett’s atk debuff applied on all 3 bosses (so I had to kill queens minion ASAP) at all times.

Ps: one final note is that boss hatter does NOT steal your buff. He just dispells them so BT/Kiril are very good picks still. As is Wilbur of course.

i also went through the first 9 stages without much difficulty but the 10th one was (too) tough for my team. the bosses themselves are not really harder. the issue is that there are 3 bosses which is 50% more than in the other stages and that the queen and one of the other bosses fires their special attack nearly every round.

so the 175 gems were definitely worth the mats

The Hatter is nerfed significantly right now. Sure, he still removes your buffs, but what made him a nightmare was applying those buffs to Alice and the Queen. If I remember right, the Queen protects against dispels of her teammates when her minion is active as well.

The Issue is caused by the Mad Hatter Boss Special Skill ‘Mad as a Hatter’, that steals beneficial status effects from the opponent. We have now fixed the issue by temporarily changing the special skill of the Boss Mad Hatter to ‘Piercing Strike’. This temporary fix will not affect the Hero Mad Hatter. The Special Skill ‘Mad as a Hatter’ is going to be fixed as soon as possible in a new build. Apologies for anyone who had their gameplay frozen by the bug & thank you for reporting this to us so…

The boss fight will be more difficult once this is fixed.

The difficulty was cranked up due to beta feedback. There were testers that felt that the Legendary level lacked the challenge they feel it is due. If all you have are 4-star classic heroes you will need to carpet bomb the bosses and still fire a full payload of SS and pop a diamond.

Basically the defense stat is tweaked somewhat higher than other quest / event mobs and bosses. It should have been harder on all levels but everyone more or less pays attention to the last level as the benchmark for the whole event. In the last iteration of beta I was able to beat L10 Legendary using only 4-star classic heroes in 4-1 blue and 4-1 red color stacks. This time it’s too hard to do with 4-star classic heroes only. I have to bring in Proteus to freeze the bosses mana in order to win. I may try mono-color teams later this weekend but I highly suspect the result will be the same. I think 5-star teams are meant to be the new norm for the Legendary level of event challenges. I might not have enough classic 5*s maxed to make a representative test case.

You’ve got too much heal and not enough damage deal. I’d recommend dropping Sabina in favour of a damage dealer, preferably one that can help against Queen and Alice (blue, yellow or purple) who sort of shield Hatter in the line up.

You can make up for Sabina’s heals with heal pots and mana pots to feed Boldtusk.

I used 4* to beat legendary despite having the 5* heroes.

Then that should be the motivator for next months challenge, get a few 4* up to speed and get access to those rewards.

Beat Legendary Level 10 with a mono-red team of 4-star classic heroes + carpet bombing. Mono-red on it’s own didn’t work out as Scarlett & Kelile are too easily one/two - shotted by the bosses. The video below jumps straight to the boss wave of the successful run. The wave where I lost trying to fight normally is here.

For Epic difficulty I tried with Boldtusk, Kailani, Sabina, Valen, and Karil… Any other 4* heroes that I have are all Nature heroes, so I was very limited. Managed to make it to the final boss on Stage 10 with only using one or two items total. Each time I used different item strategies…

The first time was with Arrow Attack, Axe Attack, Bombs, and Mana Potions, whereas the second time, I traded out bombs for Revive Scrolls.

I was surprised at how far I made it… +Defense really is a powerful tool… but yeah. I finished Stage 9 with ease and after two utter failures on Stage 10, I’ve given up entirely. I’m extraordinarily disappointed in the experience.

If the ramp up in difficulty were more steady I wouldn’t mind so much, but as is, I’m pretty frustrated by it. The graph shown above explains much of it, though… they gave the final bosses on the final stage WAY more health than they should’ve. I did it on Epic difficulty, but I don’t see the health values for Epic… the concept remains the same tho, check out how Legendary ramps up:

They also didn’t account for the additional challenge of all those Special Skills going off together. If everything were to remain identical, just going from 2 bosses to 3 bosses would already be an additional challenge… but it’s not just that. It’s all of it combined. That and the Queen of Hearts recharges her mana WAY too fast.

It’s a ridiculous jump in difficulty. The question that remains is…

'cause yeah. One of those is absolutely true.