Wizard emblems for Onatel or Proteus?

Hi, as the title suggests, who should i give my wizard emblems to? Ona, proteus or split?

Proteus. Onatel can survive without them (or at +6) just fine. Proteus cannot. I still use my Onatel at +0 extensively and she’s very durable. Proteus, even at +17 is always a risk. I still use him, but it’s dicey. Give them every chance of living long enough to fire.

I’d do Proteus myself. Onatel is already pretty sturdy, and if you aren’t having problems winning raids as is, then she’s fine at 6 or 7. Proteus “needs” those emblems to stay alive in the challenges, etc. If you don’t have Hel, and assume that’s the case, you’ll come to rely on him.

Add:
My raiding team is fairly consistent, i use a rainbow sniper team- kage, magni, marjana, mother (life saver), and onatel (used to be jackal), at 2500+ cups (ie raids against telly tanks) I swap magni for grazul and i get about a 60-70% win rate against telly tanks that are relatively weaker (telly flanked by heroes not named vela or gravemaker) haha!!

I have Onatel at +7 and run her as tank, flanked by Seshat and Kage. That middle combo does a pretty good job on defense for now since I cant seem to pull the “best tanks.” I think she does fine there.

I just got Proteus last time I could summon him, and will max him when I am out of 5* projects/mats. As others have said, he needs the emblems to be sturdy.

I see, even at +17 proteus’ def and health are lower than that of onatel’s

Yep, Onatel is a beast in defensive stats. She has 800 def points i think .
I usually emblem my defense war team 5* but there are some heroes like proteus that are so useful that one should emblem lt. In my case im delaying my Jean Francois who only has 2 nodes unlocked . Anyways proteus is absolutly worth the emblems.
Im maxing another one, who will probably receive some emblems too , poor JF too many competitors

Agreeing with everyone else here. I have both, and Onatel was my first five-star (so I got her early on, like you). I took her to +7 before drawing Proteus, and I am leaving her there until I can beef up Proteus. It sucks, because I wanted to take her as far as possible, since she is on my defense team, and further, because keeping her alive means her special remains active, but there are too many instances where she can’t go and I need Proteus (epic tier events, reflect yellow events, purple stacks, war teams when I’ve already used Onatel). And since you can max emblem more than three four-stars for the cost of max embleming a five-star, you gotta do Proteus.

I have both, and Onatel was my first five-star (so I got her early on, like you

I got my onatel from last months Tavern of Legends… from the free coins. Haha, i consider myself really really very lucky, specially afyer seeing all the posts about the bad TOL drop rates.

I still use my Onatel at +0 extensively and she’s very durable.

New to using onatel myself… i find that i am constantly checking my opponents to see how many turns are left on her mana steal. Have to be very very strategic with her.

Ah. As you said she was your only maxed five-star, I assumed you got her early on. She was actually my first five-star EVER when I pulled her as HotM in January 2019. Like you, I felt extremely lucky. With no other decent mana controllers, she was a total game-changer, and I’m learning to appreciate her elemental link, too. She can be tough to take out in a slug-fest.

As you said she was your only maxed five-star,

I got vivica (my 1st yellow 5*) a few weeks before i pulled onatel- was hoping to get malosi. I had to park vivica at 3-70. Onatel is fun to use but takes more strategy to get the win.

I was all set to max Onatel, and then I drew Poseidon! Onatel worked quite well for me at 3^70 until I could get more darts; as a sniper, Poseidon needs to be maxed to be effective. When Viv came along, she had to sit at 3^70 for ages. Again, as a healer, she can do that, but she really came into her own when she got my third set of darts. Slow, schmo. I don’t regret maxing her one bit. Just thought I’d give you a little something to look forward to.

And yes, Onatel does take more strategy to use, which makes her fun. Proteus is easier in PvE, since you can mana pot him up, but I still largely prefer Onatel in raids.

i find that i am constantly checking my opponents to see how many turns are left on her mana steal. Have to be very very strategic with her.

You’ll get the hang of it. There’s definitely a learning curve, but it’s not that steep. Also, I don’t find her fundamentally incompatible with Proteus or any other mana controller (e.g., Hansel, Gretel - of course she has wonderful synergy with those who straight up CUT mana).

Onatel + Proteus works because they can each lock up a side of the board or take turns really hampering one side if that’s the timing for when you’re charging them. One really common tactic I try to employ when I’m using both:

This is a pretty neat strategy. I should try this out in the coming events.

I usually field tarlak, mother, magni, wilbur and proteus. Maybe Ona can replace tarlak so i can have a rainbow team. I know the advantage of stacking colors or even running mono teams, but i really get frustrated when i see “hero missing”. Haha!!!

Proteus, here is mine… 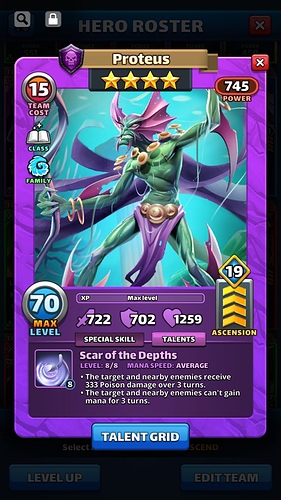 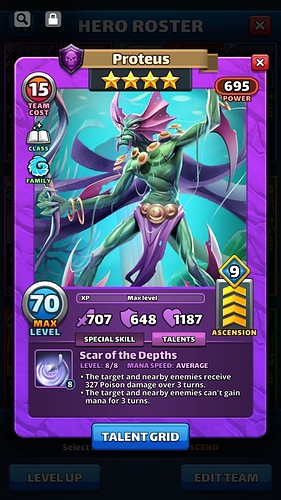 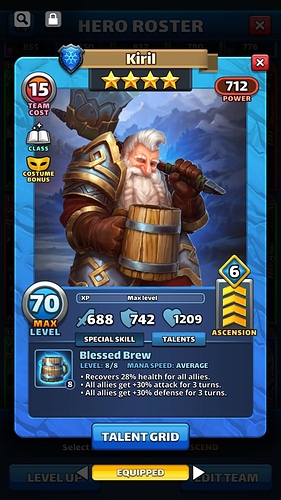 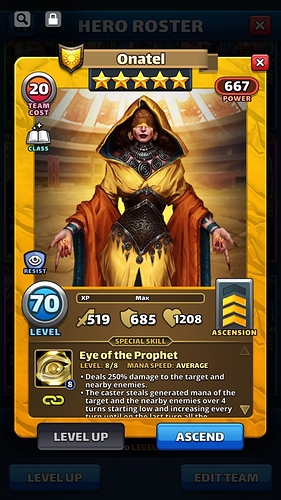 And if you have Mana Troop lvl 17, then Emblem him to +19, he is just like rigard with costume… 9 tiles is big advantadge