Why this change to agwe

I thinks he is obviously intended as a tank (or at least to be used in defense).

Honestly, it does not make much sense that any hero lowers enemy’s defense against a different element than his own, it seems more a fix than a nerf to him.

I have fought a couple of teams with him as a tank, and the guy is not easy to kill.

He’s a great hero for someone who doesn’t have Boril or Kiril and needs a blue war tank. 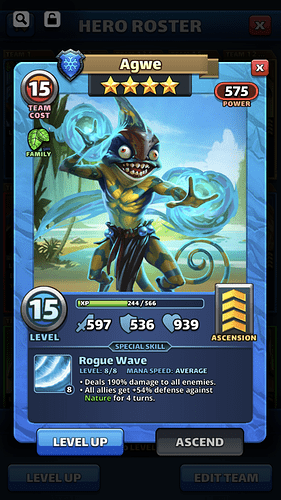 Do you like playing him? That’s really what matters.

In my honest opinion. Didn’t he go from being a titan hitter to being a defensive ace? He is on my defense team now…

How do I start my own thread?

Click on “New Topic”. Should be in the upper right portion of your screen.

You’ll have to read at least a couple of topics to be able to post an own to avoid bot spamming.

Ah okay it’s not visible yet

Thank you, that’s probably it

He’s fun to play with, though. I attack with Agwe and then Little John. Love to see that wave going up and then everybody getting slapped by Little John.

If I remember it correctly, he’s the only one average mana blue AoE hero, so ideal for farming, I use him every day on that purpose

But of course one needs lvl 23 mana troops.

Been levelling him for celeric quest as lack a hitter. trying to think of another use for him as paird with Wilbur can cause problems against nature 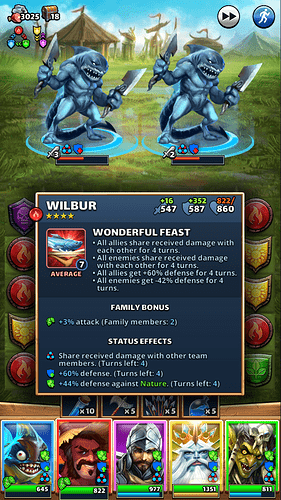 Can someone make him a attack down v. Blue hero like Almur against green, hero? That would be very awesom . Please spread the word @Staff_SGG

Scroll up to see the beta pic … First post …

Great times those were, people were attacking Agwe, Little John or Skittleskull. These days that Agwe could get some love and some cool buff. My Agwe is still sitting at 3/60 (I drew him in 2020).

Saw that but I want him stronger and this is the one I , you and everybody needs . A weak against blue hero