A 10 fold increase in the cost of your VIP pass (that I bought into twice for my one player, and once for my secondary account is enough for me to want to quit this game that I have spent several thousand dollars on in the last 3 or 4 years I have been playing. Due to the cost of inflation and the price increase in everything needed for every day living, I guess I can take everything I have invested in your game and just throw it out the window as this makes me want to quit the game entirely !!! I may have been mistaken about the original costs, but $99 for a year is out of my current incomes price range. I guess I will become a PNG, Person Non Grata !

Yeah, I was mistaken on the original price, but upping it to $99 a yr just shows how greed oriented this company has become. I am going through a slew of medical complications from an epidural injection I got last year to try and correct the damage done to my R Leg when my herione addicted ex brother jumped me from behind in January of 2015. Bad thing about this whole 9 yards is that my leg is almost as bad as it was prior to the surgery. I should have let my Mother (now deceased because of him) bankrupt her self and only looked out after my own best interests. She was over a million dollars in credit card debt when she died, and that was with me intervening in the never ending $ flow

It still looks the same to me? 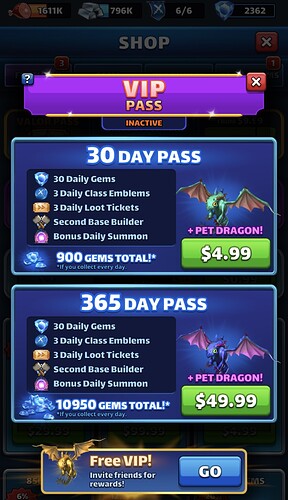 Price hasn’t changed for UK either

I am going through a slew of medical complications

I’m sorry about your medical conditions dude, but that isn’t SG’s fault. I promise I can empathise atm but I have read no complaints about how they (SG) have reduced costs in some areas in recent months. We all get angry and in my case it has cost me money but that isn’t their fault; it’s set out in policy.

The European price remains as it has been — more expensive than anywhere else because of VAT: 54,99€ per year, 5,49€ per month.

If you are talking Phoenix VIP that is not VIP. Its a new thing and does not replace normal.vip