I use her with a rainbow team.

For other than double formations… I find the 3 lanes do not cooperate often enough for me to give emblems let alone LB.

Yes, not great defense, however…
Her dispel will still work

And the def down will too!

What Is Elemental Damage? - A Guide to Elements

Elemental defense buffs and debuffs affect all attacks originating from a character of that element even if it isn’t considered an elemental attack.

But Norns… no effect…!

Just wanted to add to the chorus of “who cares if Norns aren’t good on defense?”

The only time that matters is very early in your playing career. And even then, only for a shortish while.

Being able to field a very strong second team for mythic titans is valuable. Maybe less valuable to some than to others, but it’s a pretty big deal if you do care about mythics. (And the fact that Norns can be just as effective in that role at 3/70, as they would when maxed, is just icing on the cake.)

There are other S3 heroes that’d be better for almost everyone, sure. But I’d much rather pull Norns than any of the S1 yellow 5s, except Joon. Norns have their uses. Don’t dismiss them altogether, like you should if you pull (for example) Atomos, Perseus, Margaret, Mok-Arr, Bai Yeong, Zulag, Mica, or Inari (just to name a few other paywall heroes).

And the def down will too!

Only for her own subsequent attacks though (unless your defense includes a second Dark hero, which is rarely advisable).

(Note: I actually don’t think Mok-Arr is worthless. He’s definitely “niche at best,” but can be part of a devastating mono Dark AOE attack team, if you have other heroes that also fit that mold. In rush format, a team of cRigard, cTiburtus, Quintus, Mok, and pretty much any other hitter will wipe out a defense in six or seven tiles, depending on your mana troop situation.)
(ETA: I suppose you could do something similar with Atomos)

Inari and Perseus ok…
But some of the others are debatable.

I loved Margaret next to my Gazelle!
on offense!

This new Mok-Arr-Khagan-Sargasso center is sick, OP, practically ridiculous. it’s the only Raid Defense combo I can’t beat since Odin Nerf. And now with Costume bonus, Khagan practically a ninja! It’s all I see over and over, beginning to lose sleep and interest in the game. Nerf this combo now before it’s TellyGate all over again! Don’t know if MKS even has a counter, all I know is don’t bring purple, learned that lesson 7 times[image]

Great minds think alike! (and so do ours!)

I loved Margaret next to my Gazelle!
on offense!

How does this work? Does Marg and whoever’s on the other side of her keep her buff when gazelle fires? Or is the synergy simply that Marg speeds gazelle up?

I never endorse prioritizing a hero for defensive reasons. Offensive heroes are the ones you get to play with!
I really don’t care about her inept skill for def.

I just can’t agree that Mythic Titans and any other rare occasion, validates her offensively either. Of all the niches… her’s is most narrow! And not so overwhelming in that niche that I can endorse it for others.
She’s different, and that drew me too her. I feared extinction for unique skills in 2020.

I dunno… I still use her.
Like I said.

She’s also a barrel of laughs vs any double formation.

Yeah, she kept Gazelle alive often! Probably more often now that damage has increased. But I traded Margaret for the more versatile C.Kadilen
Back when I too…
Was blowing dough

Back when I too…
Was blowing dough

(That said, my dough blowing has resulted, among other things, in being in an alliance that wants to do well against mythics, and i always want top 1% total damage, so I use my 3/70 Norns for four hits each month, and am quite pleased with the results. Yeah, the application is narrow af, but it’s better than whatever I’d be fielding in that teams’ place instead, and that’s good enough for me. I’m also leveling a second Jott for the same reason. Very advanced late-game stuff, but like I keep saying… it’s better than not having the option!)

This was… before I got tired of the forum, my primary point in any balance thread. Trying to connect from someone with options to someone without is exhausting.

Well, i mean, this thread is about OP, and whether or not norns is a good option for him to have, right? In conclusion, i vote yes.

hmmmmm… I actually pulled to get exactly - Norns. It’s not only MT but I find her also useful in Raid Tournaments to play around with restricted elements. Sadly I didn’t get her. Next time

Wow!
Reading your comment & maSSive disappointment, I am wondering, whether you, by any chance plan to feed away Norns, to save yourself from further pain !

Instead of learning from what is shared here, you are cribbing about moRe things that you don’t have

&
would urge you to read the card properly, again = While Norns makes targeted hero weak against what it is strong, it stay weak against the colour it is weak…

Well, tried sharing useful experience… but guess, you will find your way

I fully agree with you, Norns is a dud… seems like evey season has one and S2 had inari… who can sit thru stage 1-2-3 and 4 with a full manabar only for it to fizzle and fail once Bosses and opponent manabars appear.

But back to Norns, first out the Vanaheim 5%manaburn: when does it shine?.. -on defense!.. does a sane player use norns on defense?
-NO!
280% damage on 3 over 770 attack is that strong?
-Not particularly at avg speed for a legendary.
The target and nearby are weak against the color they are normally strong against?
-Congratulations all of you who play offensively in five, four or three different colors…
-Congratulations to you who does not stack up on color vs titans.
-Congratulations all of you who see every ingame encounter as a juicy rpg adventure, with minstrels and harpmusic in the background.

If i want to do damage ill stack up on color, so what if Norns makes the target weak vs another color when the tiles landing does 1,1,1,1,1,1,1 damage a piece?

-good against mythic titans?.. srsly?.. if you dont stack up on color there youre disqualified for the rest of the season… and FYI, Devana with her kill all minions pet and dispelling ability run circles around Norns on any titan.

Couldnt she atleast be fast?

Aah, sorry i remembered the use of norns…
If you check the tournament calendar there is 1 out of 31 tournaments wich is 5* with no purple…
And once that occurs you can make 3 yellow enemies vulnerable to yellow for 4 turns…

-now this makes it all worth the darts/food/emblems/limitbreakers!..

good against mythic titans?.. srsly?.. if you dont stack up on color there youre disqualified for the rest of the season… and FYI, Devana with her kill all minions pet and dispelling ability run circles around Norns on any titan.

against Baba Yaga, i recall a good portion of the leaderboard in single attack damage using Norns as part of a blue attacking team.

280% damage on 3 over 770 attack is that strong?
-Not particularly at avg speed for a legendary.

my experience says otherwise. especially with Gazelle and Mist, Norns is almost always an instant-kill of one side of the board. i’m sure there are other and better yellows (C. Leonidas for example) that can provide better defense downs, but those are the heroes i have, and i’m pretty happy with that trio.

Congratulations all of you who see every ingame encounter as a juicy rpg adventure, with minstrels and harpmusic in the background.

yes, we do like to have fun with our games. and i had a lot of fun grinding through Valhalla hard with Gazelle, C. Vivica, Gullinbursti, Mist, and Norns because Norns made yellows do, at worst, neutral damage against everyone. that team made the grind feel a lot less grindy.

that team (replace Gulli with Drake) is also my standard team for events with legendary heroes because, again, yellows do, at worst, neutral damage against everyone, and it’s so much fun to see Mica get nuked by yellow tiles in the Ninja Tower.

just because you didn’t pull Sif or Frigg doesn’t mean Norns is trash. i admit, i didn’t know what i pulled when i pulled Norns (same thing happened with Ratatoskr–my exact reaction was “who is that???”), but having her at 3.70 and playing around with her convinced me to take her to 4.80 before my C. Vivica, who is still waiting for darts at 3.70. Norns is so much FUN, and i really don’t understand how the player base of this game cries about power creep while at the same time complaining that not every legendary hero they pull is some meta-changing powerhouse.

I got Norns almost immediately when she was released. I told everybody on Reddit that I got her and was happy until people told me she was garbage and useless. And I believed them for months.

Then, one day, I was short of heroes to ascend and wondered who I could give mats to. Some people were saying that Norns had her uses.

I had so many sorcerer emblems that I thought to myself that she could at least really hurt with maxed attack. I ascended her.

Oh boy was I lucky to do so. Now she’s part of my yellow team since Drake and Malosi can’t have emblems for now. She pairs well with other hit 3 and I’ve recently got Leonidas Costumed.

They’re going to be great together.

Just today I used Norns in the first hard difficulty S4 stages where you face yellow and your purpme heroes get -50% accuracy. I was glad to have her.

One of my favorite teams to build around. 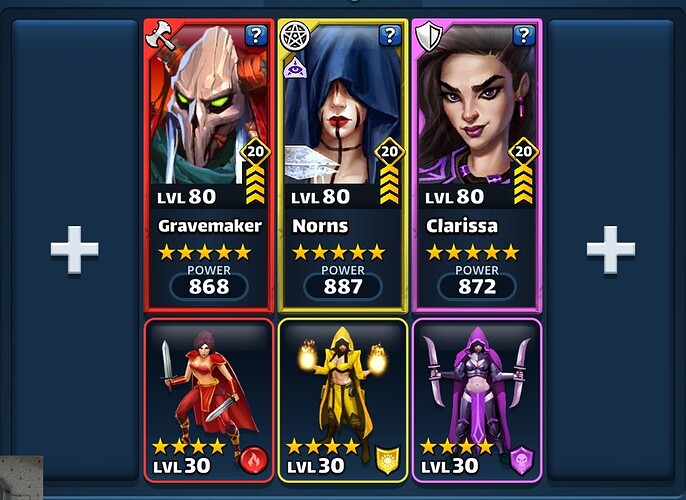 For defense, I never use Norns. However, he/she/they are fantastic on offense. They hit pretty hard, and act as a “double threat” with all of these Bera/Freya tanks. Norns is strong against them, then strong against Odin/Thor/Whatever yellow when they fire.

Now, I also use a mono-yellow team against yellow titans, using mana pots to fire Norns immediately when the battle starts. My purple titan team is pretty lackluster, and switching this up was a huge damage boost.

I will say on that topic, don’t be an idiot like I was and take a mono yellow team with Norns, against a rare yellow titan… It will reflect Norns effect, and you will end up doing 27 damage, and trying to convince your alliance mates that you DC’d during the fight!

To be fair, Norns was kind of lacklustre on release, and got a buff a few months in. I think a lot of people missed that.