Why does the game block my progress? last compass 3 month ago!

I have 6 warteams with full ascended 3* Heroes. I have 5 4* Heroes all waiting for a compass to ascend. The last compass I won was over 3 months ago in a Quest. Because I can’t make my teams any stronger it is IMPOSSIBLE to win a compass in events or tournament. Many victories over titans and wars as An A player never was rewarded with a compass. I don’t know what to do anymore and I certainly Lost hope of ever receiving a legendary hero.

I didn’t also het An proper answer from SGG how this situationeel could occur.

I could give you a proper response from SG on their behalf, but I don’t think you’ll like it, so probably just better grinding away and it’ll come.

there are a couple of things you can do, to raise the chances of receiving ascension items as loot.

the focus of this game is TIME. dont get bogged down by what goes on every day. keep track of everything that drops and review on a weekly basis. this game is supposed to go on and on and on. and you’ll have plenty of fun leveling up, building out your 6 war teams, etc etc. you’ll need plenty of maxed out 3* heroes in events and raid tournaments, so always a good idea go to back and raise some good ones. I know my first few 3*s were not very good at all, so ive gone back and raised a few more that i think are helpful for me.

Thanks you but I do all those things. I seldom waste playing time . I do very well in wars mostly second or first which isn’t amazing because all my teams have at least fully ascended 3* hero’s. In tact I AM building a seventh spare team now. I am very curious about the new tournament . I have a lot Strong 3* hero’s but no strong 2* troops anymore. Having strong 2* star troops could be recidive in supporting your hero’s. Maming no progress is going backwards because I see a lot of lower levelplayers having stronger teams and legendary heroes

If you’re at the top of your alliance and you’ve only got 5 4* heroes and the rest fully leveled 3*, then I think it’s time for you to join a stronger alliance. My guess is you’re not taking down the toughest titans you can take down.

Number of loot rolls will differ based on titan level, so you’ll want to join an alliance hitting 6, maybe 7 or perhaps even 8* titans. 9* and 10* might be a bit out of your reach at the current time.

My first alliance was stuck on 6*. We could never take down a 6*, and likewise, I never saw any compasses or any other good loot drop. So I switched to my current alliance, which at the time was taking down 7* titans and I started seeing a lot more loot. Today, we’re on to 8*/9* and I can say I see ascension loot fairly regularly.

I keep mentioning this because I keep seeing compass posts, but we’re less than ten days away from getting an automatic compass from Farholme pass, I believe. Hang tough for a few more days, watch for the rare quest to show up, and get that compass.

You can pass that with a well built team of 2-50, four star heroes, don’t even need 3-60s (although I’m assuming you have plenty of those that need upgrading, hence the compass angst).

I remember being at that point…… a decent 3* and 4* roster, even a couple of 5*……but at a standstill, because I wasn’t strong enough to compete in the events or finish all the rare quests yet. I got some decent advice and went to a better, stronger alliance, and even though I was the lowest one there, I did my best and just kept grinding…levelling up farms, mines, forges and troops.

That was before emblems, so the only way to make heroes stronger was levelling up troops which takes forever! Now with emblems, they can be made stronger yet…

Patience is the most valuable thing in the game, you’ll get there…you’ve gotten some good advice already…just keep at it and enjoy the journey…

Three months sounds like too long… have you been completing Farholme everytime it comes?

Farholme Pass comes every month or so, once with a compass and then with fine gloves. Rinse and repeat. So you may want to aim for completing that 4th level every time it comes. That should give you a pair of fine gloves and a compass every two months.

Like Dave said, Farholme gives a compass every other time. That is in a rotation of 7 rare quests. And…Farholme with a compass is the next one on the schedule (absolutely certain here). You are guaranteed one every 2.5 months, roughly. Some of the rare quests have been a bit tardy lately.

Farholme was 3 months ago not Every month

Just got your compass… 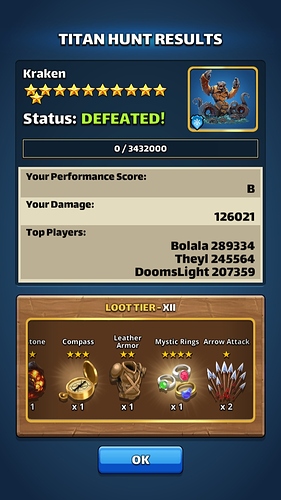 When will they release the Alchemy Lab? That will reduce some part of the problem, though the result seems to be random too.

Will they release it at the end of Atlantis?

Shortages pf 3* mats are acute early. Trust me, as you start fighting bigger titans and complete all the rare quests, challenge events, and other opportunities for rare mats, you outgrow the 3* shortage phase—it’s the 4* items that become the pinch point. 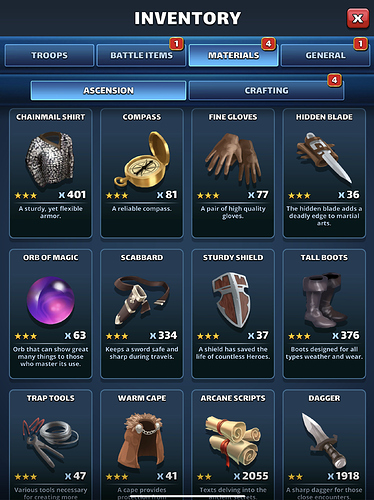 you outgrow the 3* shortage phase—it’s the 4* items that become the pinch point.

Like card games, there is a huge amount of RNG involved. Just like your displayed Orbs, I had an imbalance of trap tools. Then I got “Lucky”, when classes made Tiburtus, Sabina and Ameonna desirables alongside Rigard and Proteus. Now I am suffering from a slow trickle of purple 1* / 2* heroes for leveling compared to my plans and a huge excess of green 1* / 2* heroes compared to my plans.

Do not even get me started on class emblems.

Because it is unadulterated RNG, Empires is very streaky. And any streak will result in several choke points ( items, hero XP, emblems, ingredients, etc. ).

My best advice is take a break if RNG gets you super angry ( Best thing I ever did). Otherwise hang in there until your next streak.

My oldest epic hero’ Kashrek Will have to wait again because he is defensieve stille strong enough. Colen is useful in attacking other players but trophies aren’t very usefull except for your ego😉. Li Xiu I already have one fully ascended, zo Tibertus seems the most logical option indeed. Does Anyone know what items you need for the Final ascend of Hu Tao, I received one from training last week?

Hu Tao and Li Xiu have same color/element. Their ascension materials are the same: 4 orb of magic + 1 compass + 1 fine gloves.

A compass also? Mmm then I don’t have to hurry upgrading Hun Tao