Who would fit Vela's place in telluria def core

Which hero do you think would take vela’s place once sg nerf her?

I dont believe that nerfing Vela again would bring any diversity to the meta . Ofc you wont see vela again because she being useless but someone else would come and take her place.

Who would be this hero?

I believe it will be costumed thorne. SG is saving the best costume for last.

I would love that . Im sure i would forget them this backstab if they put some thorne love on the table

Let’s wait until final release before that. We don’t know yet if Nerfela will be nerfed to trash…

… it’s clear already but let me have some hope.

Thorne will have water damage akin to costumed azlar and is undispellable. He will either be fighter or rogue class for additional annoyance in defense. And his stats will add to attack and reduce the defense. Attack special will be reduced of course but in turn and he will have elemental defense debuff just like frida. Most importantly, the odds of pulling his costume is increased to 50%!

I would wait until actual changes are confirmed first before jumping the gun and rembleming heroes. Remember the current changes are in Beta for testing, meaning nothing is final.

Although to answer the OP, for me the next best blue flanks after Vela (and distant next imo) are cMagni, Finley and the newly buffed Skadi currently in beta (if she releases as so).

EDIT: maybe M. Lepus as well – he is very squishy though, but he does hit like a truck.

Have a different approach since having no fitting blue one, works pretty well in war. 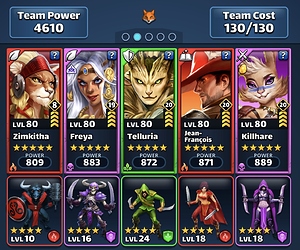 No love for Athena and her extra damage against fire?

There are plenty of Telluria owners who don’t have Vela, so I think we already have our answer(s)

Event heroes are harder to get, so even if Lepus works there, lots of people won’t have him.

As has already been pointed out, Finely performs on wing, and much less so on flank - also, event hero again…

Costumes are a bit more accessible. If the current trashed form of Vela sticks, Magni/Richard (and someday Thorne) will probably take flank on most GT? defenses.

Ariel. For those of us who rely on Mitsuko, she scares me the most.

She’s mostly a titan hero. Having her in def teams normally makes it easy to beat down.

I have Vela maxed and emblemed but never in defense. I am the only one flanking my Telluria with Snow White? At +18 all swords path, she has 837 defense and 1409 health.

Athena would be ok too.

For me the thing is she doesn’t hit non-fire nearly as hard as cMagni or Finley, both which can do essentially the same thing at faster speeds. She’s also a squishier than those two which makes her a bit of a liability to exploit by Wilbur (who also overwrites her debuff and is strong against green tanks).

But lacking anyone better she’s a good choice.

True 2 healers is a lot. But my bread and butter is Mits and Grazul and she’s a pain. Mana down from Tell and mana up from Ariel…yikes!

Regarding OP’s question, I think fast flanks are still the best. Soon, some of the top players will have enough emblems to have +18 or +19 on two heroes of the same class. That will probably influence the direction that the meta is going.

For me personally, I don’t have Vela so I’ve been using C.Magni as left flank (and GM on right flank). He does ok. If I’m ever lucky enough to pull Finley, I would switch Drake to flank and have Finley on left wing.

As a Mitsuko user, I hate it when Telly is flanked by blue non-hitter…

Actually won’t think it will make that much difference. Probably still vela now gives - damage to everyone!? If that change is made. You have your teams for GTV at high emblemed your raiding.