I know Elizabeth is Meta at the moment, but wondering if the family bonus makes any difference in the decision. 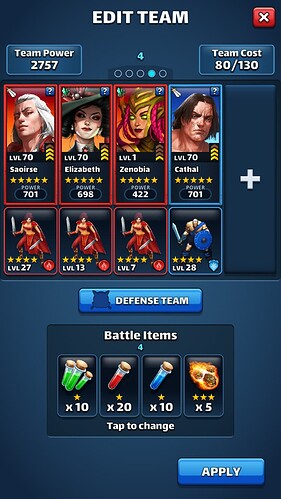 If you prioritise titans then Zenobia is easy choice.

For events Saoirse would be my choice.

If this is mainly for defense I would probably max Elizabeth first, if you would have Senan then I would consider Saoirse but Cathal isn’t that dangerous for slow(fast after a while) mana IMO.

Interesting opinions. Have plenty of 5*’s so these are all cherry’s on top. Cathal/Saoirse would primarily be for v fast wars. Obviously Elizabeth is probably the best hero of the bunch right now.

The choice depends on what you already have in your roster and where your priorities lie.

I would do Elizabeth first assuming you have monk emblems to take her to +18 or +19. Elizabeth is good on offense and could be top tier for defense depending on your set-up. She’s generally useful in most aspects of the game.

I wouldn’t use slayers on war defense outside of rush attack. You could try them on raid defense in reverse V formation for fun, but overall I wouldn’t use them on defense. Saoirse is really good for pushing high rank (top 100 or better) in Challenge event legendary mode (and ninja/magic tower) but again, depends on the rest of your heroes and your priorities.

Zenobia is awesome primarily for titans and mythic titans. But I also think she’s good for pushing high score on challenge events and ninja/magic tower. I also think she will be decent in offense in wars assuming you can equip her with a lvl23+ mana troop without deterring the mana break point of other heroes on that war team. On defense team, I’m not sure how Zenobia will do, but I think she could be ok in right wing position if you have Odin right flank. But Elizabeth would probably still be superior on defense.

I limit broke zyla to pair with her on a war team/flag. Haven’t finished her so it’ll be a minute. Zenobia gets my vote.

Current +20 monks (probably my most staked class) are Bera and Skadi. CJoon, Jabber, Tarlak, Raff, and Rana are all 4:80. Current reds at +20 are GM, Gefjon, Garnet, CAzlar, and Mitsi.

Sounds like you got some good red options for defense. I would lean towards Zenobia then, although Elizabeth could still improve your defense depending on what you use on def.