Which Defense team to go

@RandaPanduh, @FraVit93, any thoughts on which of these teams is going to be a better defense?

@KLinMayhem, I know you’ve run a QoH tank a bit. Any opinion?

Honestly, I prefer Queen of Hearts in the flank position. I think that’s where she will really shine, so even though she has tanky stats, I’d prefer to move her to flank. If she’s your tank, your opponent won’t really have to deal with what makes her SS so special; chances are they’ll either kill her with tiles before she ever goes off, or kill her minion with tiles after she does go off, therefore making her fairly ineffective and turning her into just one giant meat-shield. Maybe if she were flanked with another minion producer, like Delilah or MN, she could possibly tank since her taunt minion would be somewhat protected. However, I believe it would be better to have Delilah tank and Queenie flank, in that specific instance as well. Queenie just shines more as a flank (imo).

For wings, it’s a fairly easy decision. Alberich has to be in the far left wing to revive and give mana to all allies before the turn is over, which then allows any resurrected allies with full mana to go off that turn instead of the next; left wing was made for Alby. The other wing would be Joon since he’s fast, but squishy; he needs the protection, will still get hit enough to charge sufficiently in the wings, and will snipe whatever enemies are left.

As for the flanks, that leaves the colors blue and purple left to choose from if we want to create an all rainbow defense team (which I would highly recommend). Purple, it’s easy- I’d go Kageburado over Kunchen in a heartbeat; you already have one slow mana healer on your defense team, you really don’t need another. For blue, you could go either way. They’re both amazing heroes; both are fast mana single shot snipers. Magni’s slash attacks will do more damage, but Alasie’s SS will do more damage. Magni will buff his neighbors defense, protecting those around him, while Alasie will slow down two to three of the opponent’s mana generation. If I had to choose, it would be Magni for the protection; he makes a great flank to Alberich- protecting him even more with his defense buff. Honestly though, either would do.

My suggested rainbow defense team lineup would be:

I wouldn’t put queen in the corner either.

But hey if you wanna try it @Garanwyn , go for it!

Not my lineup, alas. I’d kill for some of those heros. The question had just fallen a ways down the stack in Help and Tactics, and I wanted to make sure the OP got some first-rate answers. Thanks for being willing to help out

Personally, I’m liking the queen for flank to a strong offensive tank. I’m really looking forward to seeing how she plays out long-term.

Thanks so much for your inputs and analysis. It seems that I have to use GM as my tank for now, till I get another solid tank which is not red, and to flank him with QoH.

The good news is, GM is a very strong tank. He’s the main red tank used by the top 100 right now (according to @Razor’s stats). So I think you’ll do fine with him there while you’re waiting.

@MrKenny @Garanwyn is absolutely right! GM is TANK #2 and has been for 6+ months…
Heck Ares is being used as a FLANK now… Not a much better except QofH - she is a monster Defensively - long life Hero - great special - once she is up and leveled by the masses that got her - this will change (GM)… 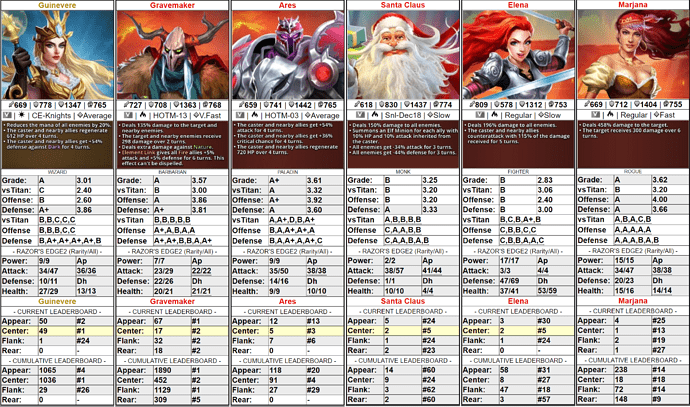 DELIHLAH IS No.4 with 4 Uses as TANK… fyi with CURRENT LEADERBOARD SAMPLING and No.3 for CUMULATIVE LEADERBOARD with 197 uses.

20 characters posting to above…

@Garanwyn and @Razor,
Thanks for the input. I watched Anchor‘s video, it seems that he‘s very positive about QoH. That’s why I wondered whether QoH can be better than Ares and GM.

You’re very welcome. Opinions will certainly vary, and Anchor is one of the best players out there.

He also can be very positive about a hero without necessarily believing that hero to be the best at a given job. He’s trying to balance advice for newer players who may have just pulled QoH as their main red 5*, with advice for players who have many old HOTM.

Ares really suffers from dispellers, of which there are now many (Zeline, Evelyn, Panther, Domitia, Kageburado, Hatter, and several 4*). He’s clearly a safer flank than tank at this point. I suspect QoH is a better tank than he, although I’d like to see more evidence to be 100% sure.

But GM has no obvious weaknesses, and fires much faster than QoH. He is simply better at punishing enemies who hit him with tiles, which is job #1 for a tank.

I’ve watched several videos of QoH on defense at this point (a bunch of people went hunting QoH tanks and posted videos in one of the Line groups to help give good data on her). I think she’s a very solid tank. But I believe GM will hold cups better for you.

I don’t think there’s a wrong answer here. You won’t be sorry if you pick QoH (I don’t think). But I suspect you’ll be happier with GM.

@Razor Thanks. I wiil stay with GM, and hope that he won’t get nerfed so soon.

I’d probably flank Kunchen with GM and QoH. She draws the special fire, Kunch only eats tile damage and GM burns the opposition, hopefully while it’s defense is down. Alby next to the QoH for some protection and KGB on the otherside busting chops.

@Snowdoggydogg
Thanks. I do think that QoH needs a healer and cleanser in the same team. However I am abit conservative about a slow tank for defense. If Kunchen is with an average speed, he may be perfect to be flanked with QoH. I have to wait and see how good Kunchen is in a defense team.
Thanks for your input.

I’ve faced a few Kunchen tanks, some with talents on them and they can take a beating. I used it to charge my specials but did get smacked around by the flanks.
If QoH took some of the specials away, they’d be a real pain to takedown with tiles alone.

Mana troop can get Kunchen’s heals going quicker which is quite noticeable on attack.

Kunchen does look like a better tank than other slow tanks such as Vivica or Santa. Maybe better than Onatel and Ares? I am not so sure. Moreover maybe it’s a bad idea to have 2 slow heroes in the same team. Kunchen is already a healer. Should I team him up with the hard hitters, instead of Alby?
How about this;

As Garanwyn pointed out, does it bear any chance to hold more cups than a GM tank, after applying talents that is. The problem of my GM team is that I can’t spend emblems on GM and Kage at the same time. The above team on the other hand, has no conflicts in applying talents.

Hey @MrKenny I hope it’s ok to post in your old thread.

What did you decide to do in the end? How did they work for you?

I currently have a kunchen tank and after the better part of a year I will hopefully get my last rings for gravy with next mount umber. Did you keep Kunchen as tank, or use GVM?

I would have Magni on a flank and Greg somewhere (the last spot is undecided as Inari is my only maxed 5* holy, at the moment, I could use something else like Gretel or double up one on of the other colours).