Which 5*Fire to limit break

Have favourite five to consider for limit breaking enhancement. Have one level23 and one level 11 mana troop, with two average speed heroes in my mono team consisting of Garnet, Elizabeth, Black Knight, Gravemaker & costume Marjana.
Which order would you break them, as could take two rounds of omega mirages to get the level 3 aethirs, for one hero so is going to be a long haul to do all five, with no reset option makes choice critical. My conflict is:

Garnet, for increased durability, but no special enhancement; but is current speed sufficient that boosting is a waste
Black Knight, love him and pairs so well with Garnet keeping team alive, but is balanced hero, advice is to break offensive stars
Elizabeth, not field tested and may be nerfed, average speed
Costume Marjana, so great but base stats lower than Garnet & Elizabeth
Gravemaker, is it best to boost a star whose light is fading?

What would be your priority order? Leaning towards Elizabeth.

One comment recommended elemental defence downs for limit breaking without exception as they are the most used overall in attack.
Pushes c Marj up… I get the logic but would struggle to break Frida L19 ahead of Finley tho.

Breaking ave speed hero commits my only L23 troop, so my thinking has gone , again, away from Gravie as he may still be a tad brittle, to this order , cMarj, B Knight, Gravie, Elizabeth, Garnet

Not have such amazing heroes, so here’s my Scarlett breaking 1.000 damage.

Just did the same. Just that I opted for some extra defense and my attack is under 1000, but the defense is close to 700, which greatly increases her survivability now.

I’d go for either Elizabeth or C-Marjana. My preference is Marjana because my strategy overall leans towards increasing the survivability of those “glass-cannons” since their outrageous attack stats will not help me too much if they die quickly.

I think red doesnt have any standout 5* candidates to LB.

C marj is pretty sturdy already and her main role is support (red def down) rather than damage.

have to choose betweem costume azlar, yang mai and marjana.

We have about half a year before this question becomes relevant

For now, broken Boldtusk and Wilbur since I use them ALL the time including red team.

Now, what two red 3*s should be improved first?

You can get 5* Aether from winning wars and top 1%/5% tournament loot. I’ve already got my Khagan up to level 83

Way more than 100, there are several just in my alliance. But to most people this conversation is more relevant the 2nd quest cycle… For me I have meh choices. Azlar, Elena, C. khagan, marjana, and Anzogh. I went anzogh, sadly my best red was my first ever 5*. And he is a consistent hero on offense and can be used in defense with the boost.

Yellow I can also do a 5* when that quits cones around.

Costume Marjana, so great but base stats lower than Garnet & Elizabeth

Doesn’t matter, she’s the only 5* fire elemental debuffer, she greatly enhances the power of any red stack, and hence she should be top priority for aethers by default.

Here’s what a LB cMarjana looks like (not mine):

In fact I’d go as far as saying 5* elemental debuffers should, by default, be the absolute highest priority for limit breaking. (since blue has two, Frida over King Arthur since she arguably has more utility with the dispel and elemental link)

Really useful, thanks, I have been thinking through Ice and toying between Frida, Krampus, Cobalt and Finley. Frida went off list first as support hero and was thinking better to boost snipers attack. Cobalt came out top as just love the flexible specials of Ninjas. Looks like need to rethink again!

Burger King get it IMO

What about 4stars, especially for the red event teams if you want to keep competing?

I did already boldtusk and now doubting between scarlett, wilbur and red falcon.

Scarlett should get it. With emblems her attack would surpass 1000

I had the same thought.

I only have one 5* elemental defence down though. Panther.

Nobody said anything about C Magni (if you don’t have Cobalt).

Defense down has more versatility than elemental down imo. I suppose you can get it from other sources.

I’m pretty sure I’m going to wait on a 6th set of rings and LB Gefjon.

Unlike blue heros, for reds I do have a missing Aether to limit break 1 legendary… And I have no idea which one. I do use Gefjon and GM daily, since recently, Elizabeth as well. I have no idea what hero would benefit the most. 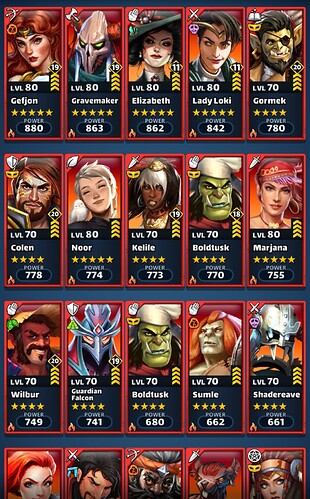 What would others do and why? Still struggling to understand the impact.