When you will fix RNG and rewards system?

They’re not hiding. You’re complaining about an “issue” that isn’t an actual issue. It’s an intentional part of design.

Forum has a bugs/errors section for real issues

Lol have you watched this game grow?

Majority of changes they implement comes straight from player suggestions

We have an Ideas/Requests section, you should read it sometime then get up to speed on all the updates that have been rolled out since the game was released

Do they cater to your every want/desire?

No because they can’t. Last i looked game had 5 million+ downloads. They have to roll with what’s best for the majority that keeps the game design functional. Not their fault if you make poor decisions or have a gambling problem. There are helplines for that.

Great life lesson right here, ladies and gentlemen. If you have a request to make, first make sure to call the other party an idiot so that they become likely to cater to you. Works every single time!

I unfortunately have had to write to companies with a complaint about their products and I’ve found the most effective method is to start first with what I like about their company.

For instance, telling them that as a loyal customer for many years, and never having any problems with their products, this one particular product has been a disappointment, etc etc.

When did we start forgetting that it’s real people reading our complaints, and as real people, why shouldn’t we treat them with some respect?

There is certainly a better way to air frustrations and state legitimate concerns without anger or even personal attacks.

And yes, I’m quite prepared now for personal attacks

What are the odds when summoning heroes?

The odds should be better because we are paying customers. We are playing a pay to win game, not a pay to lose game. It’s total bs when you spend money on something and consistently get the bare minimum promised product, it’s borderling theft of services. If you’re game was regulated like the rest of the electronic gambling world you would be shut down or fined for theft of service or fraud.

For somebody who thinks the game is not good, and that the devs don’t care about their customers, and feels like the summons are “borderline theft of services,” you certainly seem to have kept playing for a long time. This complaint of yours was from April of last year.

I must confess, really never understand the people who constantly trash talk E&P and hate on the devs, but keep playing the game. It’s not like the play store or the app store are such barren wastelands that there’s literally nothing else to download. You could probably install five new games a day 365 days a year and never run out.

So either the game is pretty good and you enjoy it enough to stick with it for the better part of a year, or it’s an awful game shoveled out by uncaring crooks. Pick one, though, eh? Actions speak louder than words.

This should be pinned to the front of the forum

I have been at this a long time, a year and a half I think. I’ve spent about 10 bucks on 2 vip passes. I stand behind everything I’ve ever said about these developers, their greed and their shady dealings. They change the game sure, and each time the changes only serve to make them more money. Each new change requires more heroes, better heroes, a bigger roster of heroes, more desire to win something for the better chance at a loot chest. They have never changed anything for our benefit that didn’t benefit their bank account more.

2 weeks without 1 set of roots seems off to me. 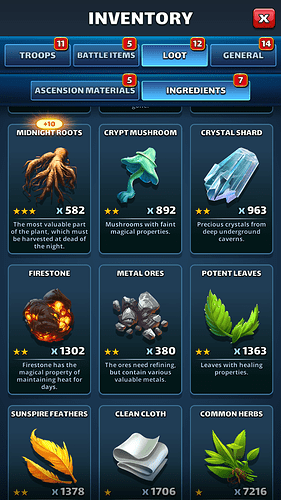 I don’t know if you guys know this, but SG is a business and their employees gets a salary. Pretty standard things for a company. In order to do this they need ‘income’ or ‘renevue’… If those words are too fancy then ‘moneeeeeh’ should do the trick. Nothing new under the sun there. And of course they are greedy. They are in a cutthroat businesssegment and most likely have high demands coming from the top.
What exactly did you expect from a big free game? It is up to yourselves to manage your time and money put into this game. If you’re so unsatisfied, then stop playing or voice your concerns in a decent manner. Slander rarely gets you anywhere.

Also I started playing this game in November 18 and pretty satisfied with the pace of the game. I can keep playing this instead of being bored after a week. I don’t mind the grinding though.

So you’ve been playing for 18 months…even though the developers are awful and greedy and don’t care about their customers… and the game isn’t good.

The problem is, we as players have probably grown up playing games that were required to be good to sell copies.

Also, if the game is so fueled by greed, how have you managed to have any kind of a play experience at all for only $10 spent in 18 months?

So… does your version of the play store just not have any other match-3 games in it, or what? Something doesn’t add up here. Like I said, actions speak louder than words.

The only thing that’s balancing out is the SG bank account.

I’ve maxed more purples and yellows than i have red blues or greens which is why the mats sound unbalanced but if i used every set of mats i have" I’d have the same amount of maxed 5* in each color.

Really doesnt get more balanced than that.

There are roughly 2 million players out there, your lucky fluke doesn’t make them feel all warm and fuzzy.
Quite often a seriouse game problem will be raised & very quickly a tap dancing chear leader will front the stage & convince everyone that it’s just fine, go back to sleep.

Get used to it or quit playin

Quit playing instead of fixing what’s wrong is one of the most common advice given by a tap dancing chear leader.

Because the complaints are a minority

Game works for the majority

Have you tried candy crush? No rng and no paywall heros. Might be more your style. If you change the clock on your device, you even get unlimited lives. You’re welcome

[quote=“Zero2Hero, post:56, topic:78325”]
Quit playing instead of fixing what’s wrong is one of the most common advice given by a tap dancing chear leader./quote]

I’d go further… Not one of the most…The MOST. Period

Lol you guys either like the game or you don’t. Chests, loot, and summons have been RNG since day 1. Nothing new. If you didnt like it when you started, you wont like it a year down the road either. Why waste your time?

Full pot of fresh brewed coffee, i can do this all night