Did the counterattack icon disappear after the minions were removed ?

There should not be counterattack if the minion is removed…

Several didn’t have minions but the rest did?

As long as minion remains, there will be counterattack.

No, it stayed on after i killed off the minion 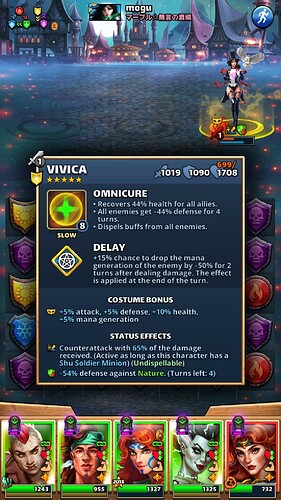 I posted a pic below for u to look at. It should’ve been removed right after the minion was destroyed

Zhuge and viv were left, zhuge fired special n then i killed zhuge. I then fired evelyn killing the minion on viv but the counterattack remained.

Think you should send in a tix to CS. Include those screenshots. Looks like a bug. It could be a visual bug too.

SGG can test it on their own internally.

I did and they immediately told me to post on forum. I spent three days trying to explain to support the issue and told me nothing is wrong and the fourth day they finally said we now understand what you are talking about and going to look more into this. Gong on day 3 almost now with no feedback from them.

Sigh … thank you for your persistence.

It’s always like this. Denial. Diversion. Deflection. Before they buckle down to study information provided.

They are looking into it now. That’s a good thing.

It will take awhile.

In the meantime, be more careful if there’s Zhuge in the enemy camp. :)))

Thank you for the reports, we are looking into this!

I tried to see if this is a known issue but couldn’t find any relevant bug threads with “Gefjon”.

So here goes, I used Gefjon to steal the Shu Soldier minions off of Toxicandra. Those minions provide the Riposte buff for as long as they are on the hero. But when Gefjon steals them, the original hero retains the buff even after the minions are stolen.

I tried to test with Liu Bei but it didn’t work against him.

I will try to test more scenarios.

Can confirm that Liu Bei Minions are also impacted by bug.

Also can confirm that Ranger trait is irrelevant. All that is needed is for Gefjon to survive the Riposte.
If she bypassed Riposte, she keeps the minion.
If she did not bypass Riposte, the minion dies.

In both scenarios however, the enemy hero continues to retain the Riposte from the stolen Shu Soldier Minion. The only time the buff is truly lost if Gefjon dies in the process of stealing the minion.

I have asked Staff to look at it.

Any updates on this issue?

I first ran into it during a Wo3K flag this month. My Gefjon took damage from a Liu Bei minion.

So simple screenshots may not be enough to demonstrate the bug, and unless you watch the video very carefully it isn’t obvious what happened.

When I reported the issue to customer support they wanted me to record a video. It took a bit of legwork to find the right scenario again but I couldn’t send the video because it was too big. I was too frustrated to try to crop it.

Any updates on this issue?

I have not received any feedback from @Petri