What's the meaning of this runic rock? 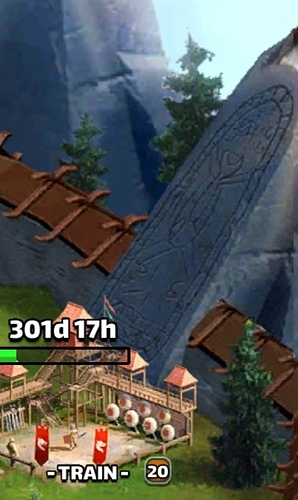 Anybody any knowledge about it?

Almost looks too close to camp to be so. The watch tower is the only thing i remember being that close

Edit: i found the rock with the tree growing out of it. I just thought of a fanciful story and i think i will write that

Long ago, there were 2 lands of people who fought. They fought and fought for so long, most had forgotten why they fought. Some doubted the war should continue, and stopped fighting. While others were vengeful and had a lust for power. The only thing that connected these two lands was a single Stone Bridge. Many times they had tried to blow it up, but a deep Magic resided in it, keeping them from doing so. In the 500th year of the war, the village people went to the Strong Hold to plead with their king to stop this madness. He thought about it, and said he would talk to the commander of the army and see what he could do. So on the first Saturday after that, he signaled a truce by white flag to talk. The Commander agreed, and they both walked out with 2 men in back like a triangle. They met 6 feet apart, and Commander Barst asked, “What do ye wish to yarn 'bout, Your Majesty?” He said ‘Majesty’ mockingly…
“My people want an end to this war.” King Laughy said calmly. “They are tired of it, and most don’t think that it is a just war anymore. Will you have peace? Or will you continue this war in more bloodshed? We two have the chance to make an era of peace for our lands. What say you?”
“Let me consult w’ff me men fir 2 days.”
And so they agreed. At the end of 2 days, with no one killing no one, they got a taste of peace, and everyone found they liked it. So they all agreed to end this war. At the signing of the Truce of Stone Bridge, the ancient God, RNGenus, was greatly moved by their truce, and made a rock fall from the sky and it landed above the bridge doorway entrance to the King’s land. “As long as that rock is there, your truce will be as steady and strong as it is,” He said with a variable voice, as it went up and down just like the summoning odds. Lightning flashed and struck the rock, and out of it grew a tree. “The tree represents the friendship your two lands will have. Now go in peace,” and they did. Never before had there been such a time as this, at least that none could remember. They had parties, threw festivals and traded amongst each other, no iniquity or hate against one another. And they lived out that rein of peace, to the days of when the Dark Lord came, but that, is another story.

I think it is the temporarily clised portal to season 3. It was closed to prevent the coronavirus from spreading there. It appears that they have little immunity to it.

It’s either the flayed man from game of thrones or one of the devs snuck their kids refrigerator artwork into the game.

I liked this story Saphirra!!!

@JonahTheBard here’s another one for the library!

It was a bit jarring to see the term village people…it immediately made me think of this: